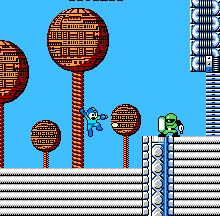 The fact of how much of Mega Man‘s graphical style, sound effects, and gameplay stuck with the franchise for over 7 years completely intact speaks volumes about the first game’s degree of perfection. Aside from background tileset complexity, there’s little change in terms of the game’s aesthetics compared to many of the future titles. The one major difference compared to its successors is the number of Robot Masters to fight. The memory space limitations with a mere 1-megabit ROM meant the originally planned number of 8 main stages that would match the rest of the series were reduced to 6. All of the Robot Masters were conceived as having been co-created by a partnership by Light & Wily before the mad doctor stole them and reprogrammed them to serve him in his quest for world domination.

A rather dopey-looking lumberjack robot with with big handle-like ears and big cleaving scissors on top of his head made to slice through trees. He flings his sharp boomerang-like Rolling Cutter weapon from his head at Mega Man whenever he’s not bouncing about. He’s a really easy boss to take down. You know, Rock beats scissors. [Weakness: Super Arm]

The first in a long line of big guy Robot Masters. Built to aid with constructions to reclaim land, he causes earthquakes whenever he lands from his jumps and tosses huge boulders at Mega Man with his Super Arm. He has a tendency to emerge in many Wily Fortresses in rebuilt forms in later games. [Weakness: Hyper Bomb (Time Slow in Powered Up)]

A robot built for extreme sub-zero temperatures, this parka-clad boss skates gracefully on slick surfaces and breathes Ice Slashers capables of freezing anything in its tracks. He, Fire Man, and Elec Man are the first of many Robot Masters to be based on the traditional elements. [Weakness: Thunder Beam (Hyper Bomb in Powered Up)]

Originally created to handle explosives in aiding mining and Guts Man, he now uses his big black cartoonish Hyper Bombs he pulls out of hammerspace to make anything standing in his way go kablooey. His orange mohawk is rather stylish, too. [Weakness: Fire Storm (Rolling Cutter in Powered Up)]

A walking incinerator made to burn flammable trash away. Possibly one of the hardest of the original Robot Masters to take down due to his ability to whip up a flurry of Fire Storms. The flame burning from the exhaust port on top of his head never goes out. [Weakness: Ice Slasher]

A robot heavily inspired by American superheroes (his mask is stated to be modelled after Wolverine’s). He’s perfect for generating electricity for power plants. Once turned villainous, he fires off Thunder Beams that zigzag vertically up and down as well as straight ahead. They can destroy Mega Man in just three hits. He is one of Inafune’s favorite robots and the first original Mega Man character designed by him. [Weakness: Rolling Cutter (Oil Slider in Powered Up)]

Another element that was removed after the first game is the inclusion of a point-based score system, a holdover from Capcom’s arcade-centric days. Enemies tend to drop tiny pellets that add to the score total more than any other pick-up in this title. Every selected stage lists the points earned for beating the boss, and it’s possible to re-battle each Robot Master or even fight through Wily’s Fortress over and over again. It’s rather pointless outside of bragging rights, since the game doesn’t track high scores and has no save function. There aren’t even passwords to save progress, so every Robot Master has to be fought every single time the game is fired up. 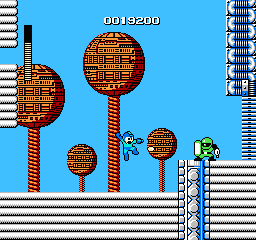 That game is also more difficult than its sequels. Though many of the stages are rather short, the game predates most of the luxuries and fail-safe mechanisms that have become staples to the series. There are no E-Tanks to refill energy. Post-hit invincibility won’t save Mega Man from the instant death touch from spikes. Health energy pick-ups come few and far between in many stages. The pre-boss shutter door areas are longer than a single screen and have enemies inside, and are not merely continue point safe havens right before the upcoming boss. A couple of these pre-boss corridors are even vertical, a rare sight in the series. The Robot Master rematches have a set order in the Wily fortress levels, broken into two segments intwo stages, and they don’t drop large life energy capsules like in later games, making the 2nd boss rush a dangerous affair and a struggle of conserving health as much as possible. Not to speak of the more frustrating platforming segments in certain stages, most lives lost being attributed to the fast-dropping conveyor platforms in Guts Man’s lair, or the pellet-firing propeller-powered Foot Holder enemies in Ice Man’s stage where Mega Man tends to glitch through and fall to his death after he takes damage. And that’s not factoring in the Yellow Devil. His super fast pattern of blob pieces flying back and forth across the cramped quarters pose possibly the most challenging part of the entire game. 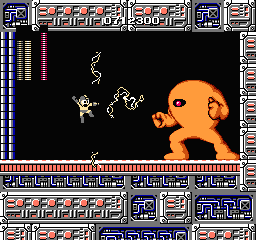 Defeating all 6 Robot Masters unlocks Dr. Wily in the middle of the stage select menu, setting a course of 4 levels where heavy use of special weapons is required to traverse. Again, the stages themselves aren’t too long, but there are many hazards and enemies in the way that will whittle Mega Man’s health before reaching the bosses. Smart weapon energy consumption is a must in many sections of the Wily stages to reach the end unscathed. Fortunately, the majority of the acquired arsenal is useful for its intended purposes. The Rolling Cutter slices through many enemies that are immune to the standard Buster, and hits a little above and below the regular shooting range. Fire Storm creates and nice damage-dealing barrier around Mega Man. Thunder beam shots in 3 directions, able to destroy enemies far above or below. A well-placed Ice Slasher can freeze a hopping tank-like Big Eye in the air to safely walk under. The Super Arm clears away gravely rocks, which can also be tossed to obliterate groups of enemies. Sadly, Hyper Bombs are hard to use properly due to the time-delayed detonations, even though their explosions at least cover a sizable section of the screen. 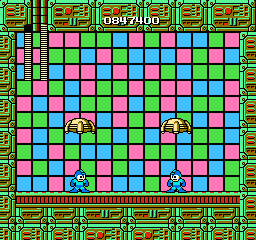 Another item imperative to completing the game is the temporary platform-making Magnet Beam nestled in Elec Man’s stage behind a layer of tossable rocks. Though it’s easy to eat through its energy quickly, it makes it possible to walk over many pits or bypass obstacles like the disappearing block puzzles. Unlike other required special items or Rush parts in later games, this necessary special item is not just handed out to Mega Man, but needs to be earned. Unless Elec Man’s stage is entered with the Super Arm in Mega Man’s Arsenal, it becomes necessary to visit the stage again later.

One little cheat involves mashing the select button to pause and unpause the game, making certain weapons hit enemies multiple times. Suddenly that Yellow Devil falls quickly with one Elec Beam, and Wily’s machine can be beaten in seconds. Sadly, this exploit is removed in subsequent ports and remakes of the game. 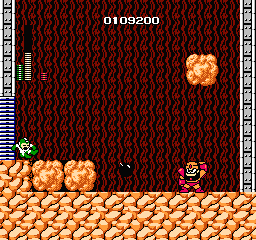 While Mega Man is already an excellent game in concept, the memory limitations are apparent throughout. Aside from the previously mentioned axing of 2 Robot Master stages, many layouts are recycled in the levels, akin to the repeating screens in Metroid and its sequel. The Wily stages reuse many of the same graphic tiles with palette swaps. The repeating layouts do pad many of the levels out longer than they should, particularly Cut Man’s and Elec Man’s stages. These looped sequences merely add tedium and do not any boost in the challenge.

The game was given a lower print run initially, due to Capcom’s apprehensiveness of the new IP. They were surprised to find that while it didn’t fly off the shelves as a huge blockbuster in Japan, it did exceed the low expectations to become an average seller for its first few months. The game garnered a fairly decent sales climb over a period of time in the US as well, once word of mouth spread about the revolutionary gameplay hidden behind the hideous boxart. As far as bad video game packaging goes, Mega Man‘s American cover is highly infamous, one that was illustrated quickly by a peer of Capcom USA’s marketing manager to make the game appear not as cute as the Japanese box. With the bad anatomy, awkward posing and expression, and wildly inaccurate costume and tangential background, it was an eyesore at best, leaving the blurbs and screenshots on the back of the box serving a better purpose at selling the product. The laughably awful design of the cover has been placed on an ironic pedestal in recent years, cropping up in a few venues released or planned with Capcom’s titles, officially recognized within the company as “Bad Box Art Mega Man”. 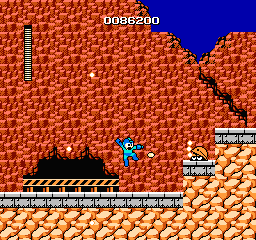 The first Mega Man game has the most remakes, ports, and re-releases in the entire franchise. The first came in 1994: a 16-bit remake alongside the third and second game and a bonus segment in The Wily Wars. The second port kept closer to the original, with some extras, as part of the PlayStation Complete Works and later on the North American Anniversary Collection in 2004. 2004 was also the release year for the first mobile device port that was developed by Lavastorm. The first mobile port has very scrunched up sprites, MIDI versions of the music but no sound effects, shortened redesigned level layouts for the Robot Master stages that sticks the Magnet Beam in Bomb Man’s stage, and truncates Wily’s Skull Fortress down to a mere boss rush. The game can be played in an easier Capture Mode that grants the player unlimited lives and a save feature at the mode’s cost of being unable to keep high scores. A Japan-only 2007 re-release for mobile devices stayed truer to the original NES version, at least graphically. The newer port keeps the MIDI music and Robot Master stage layouts, but adds sound effects and a fully renewed Wily Fortress. A later update added the ability to play through the game as Roll, whom maneuvers the same as her older brother, except she can fire charged buster shots at the cost of weapon energy. A glasses-free 3D version of the port was released for Japanese Android devices in 2011. A fully revised enhanced remake called Mega Man Powered Up came out for the PSP in UMD form in 2006, followed by a digital download version on PSN. It turns the graphics into polygon models and adds new enemies and even two new Robot Masters. Finally, the original NES version is available on the Wii and 3DS Virtual Console services and the Complete Works port is also available on PSN.