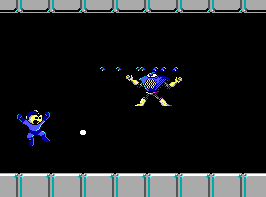 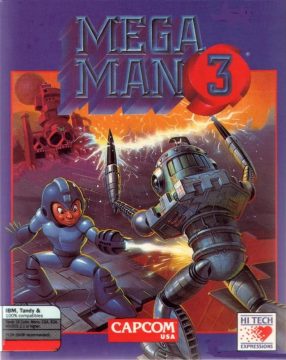 That subtitle is a little too fitting. Skipping over number 2 in naming, the second DOS Mega Man continues the badly coded dreck with more levels and somehow even worse gameplay. 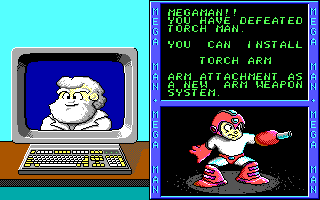 The levels are no longer given a linear structure, but instead arranged in a maze-like block map that Mega Man is dropped into to wade through – and wade is the keyword here. The swimming mechanics get used way too frequently as most of the levels feature a lake of liquid to robo-dog paddle through. These sprawling stages cause major loading times after choosing one from the selection menu. The Robot Master count has doubled to six total, though their designs are merely shameless edits of existing bosses from the main series.

A washed-out yellow Crash Man with a Hard Man’s head, who shoots electrically charged drills that fire from his Bit Cannon. He hangs out deep in an oil rig that has more ladders than oil drums. Those fires on the rig should really be dealt with. [Weakness: Torch Arm]

If you mashed Snake Man and Gemini Man together and changed his head into a lamniformal motif, you’d get this adbomination. His Shark Boomerang works much like the Rolling Cutter. A NetNavi from the Battle Network series shares his name but isn’t based off of him at all. [Weakness: Oil Stream]

He’s not the same Wave Man from Mega Man 5, even though both games were released the same year. The developers didn’t even try to hide the fact his design is Air Man with Water Shooter guns where the fan should be. [Weakness: Shark Boomerang]

Again, not the same Oil Man seen in Powered Up. His head kinda looks like Flash Man’s, and his Oil Stream is just dark pellets. So far there’s two oil themed stages and water themed stages. So far, no good… [Weakness: Blade Launcher]

Of course not Blade Man from Mega Man 10, though his Blade Launcher acts an awful lot like Triple Blades. And another stage with water? Next! [Weakness: Bit Cannon]

This fire-themed robot hides in the sewers. Makes sense. That’s yet another level with water. Even his boss room is filled waist-deep with blue water. Probably not a smart move due to his obvious weakness. [Weakness: Water Shooter] 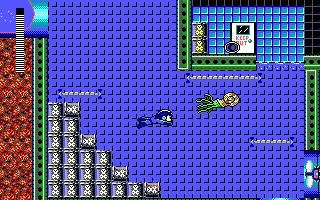 Little has changed graphically, even going as far as reusing or redrawing old sprites and tiles from the previous game. Much of the new assets come from the expansion of the bad guy roster. There are many humanoid baddies that simply run around and routinely fire at Mega Man. His worst enemies are the gun turrents attached to almost every wall. Their shots can aim at 8 angles, shoot every other second, and are usually strategically mounted around tiny platforms Mega Man has to jump across. Otherwise, the game scales back the difficulty but pounds on the frustration with huge levels that don’t provide any clue for the correct path to the boss confrontation. In that sense it becomes an even bigger headache. Creating spreadsheets is more pleasant than playing this game. 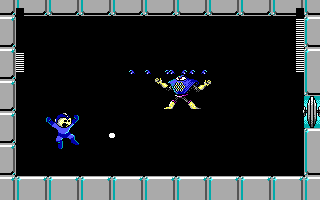