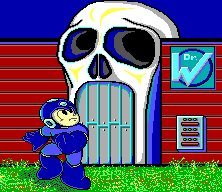 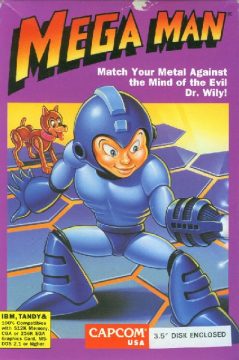 1990 saw the beginning of the Commander Keen and the Monkey Island franchises on the PC, and even some decent run-‘n-gun platformers like Dangerous Dave and Rick Dangerous 2. It seemed a sure thing taking a well-known platformer property like Mega Man and making a nice port or reimagining for those without an NES. Hi-Tech Expressions apparently thought so, and they helped fund and develop it along with Ronzor Labs, who developed such DOS gems as Beethoven’s 2nd and We’re Back!: A Dinosaur’s Story. Needless to say, the quality was not very high. 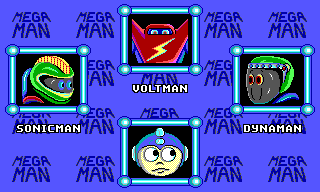 Gamers stuck with a 386 who expected the console Mega Man experience were severely let down. There is no music whatsoever, only harsh sound effects generated from the base PC speaker. The game at least supports EGA visuals but the graphics, to put it lightly, have nothing of the spark and imagination of the levels and enemies in the NES titles. Boy robot or no, there’s little thrill wading through bland corridors of grey and brown modern day warehouses, power stations, water treatment facilities, and dirt tunnels shooting at regular rats, ants, frogs, and bats. Pathways criss-cross without care in a vague attempt to make these boring places more exciting, but it only makes the dull gameplay drag. 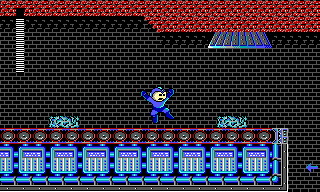 The keys into Wily’s complex lie in the hands of three new Robot Masters:

Sort of a Bubble Man knock-off, who shoots Sonic Waves from his harpoon gun and drops mines. [Weakness: Nuclear Detonator] 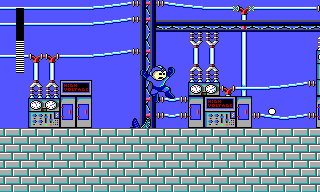 Though Wily only sends out three robots for Mega Man to fight, that shouldn’t be taken as a sign of mercy. If anything, reaching the Robot Masters is one of the most difficult challenges the Blue Bomber ever had to face – for all the wrong reasons. Right from the game’s start Mega Man must contend with a vicious robo-dog that never backs off once in range. If he manages to survive, it’s a small brisk jog to a building complete with a security camera right outside. 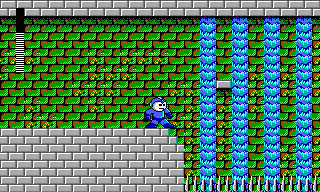 The short intro stage is merely a taste of the cheap deaths that follow throughout the game. Everything hits too hard and there’s little mercy invincibility in-between, leading to fast demise. Wily must be devious to allow narrow passages to litter with enemies too short to shoot at and too long to hop over in the low ceilings. All of these cheap ploys are made worse with dodgy controls that were built with the keyboard in mind. Trying to hop across the disappearing blocks or to push against magnetic forces while using the arrow keys to move and J to jump makes things harder than they should be. This brutal platformer only lasts four stages – five if you count the short intro level – so should you get the hang of the devilish and badly coded tricks the game throws at you, it’s all over within minutes. The final stage in Dr. Wily’s domain reuses the background tiles from the previous stages and is nothing more than an extended boss rush. Fortunately, each boss is easy to defeat with a flurry of pellets, as the special weapons are difficult to aim or bugged beyond repair. 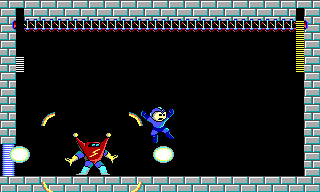 As huge of a stinker as this game was, a few of the graphics used in this title were copied over onto the first Duke Nukem game. Two of the easy to spot plagarizations are the radioactive canisters in Sonic Man’s level and the wooden crates in Dyna Man’s stage. Despite the art swipes, Duke’s first-ever outing is far and away the superior game. 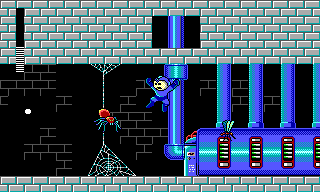 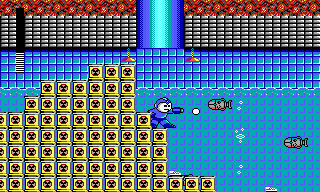 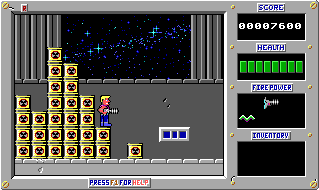 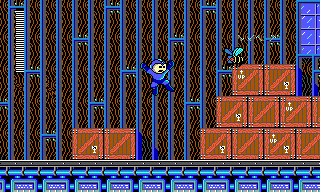 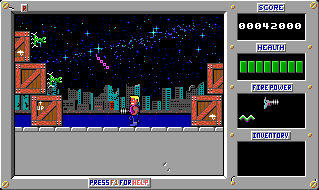