Out of nowhere Capcom breaks the tradition it set with its Game Boy Mega Man titles, as Mega Man V features all new Robot Masters to fight instead of recycled foes from the NES. A group of Stardroids descends down from space, their armor too tough for the Blue Bomber’s pellet gun to damage. Luckily, Dr. Light is able to attach a Mega Arm to the hero, which doesn’t look all that different aside from the charge shot appearing like a Heavy Knuckle when fired, Mazinger Z Rocket Punch style. The good doctor also builds Tango to assist Mega Man, which is not quite as helpful. 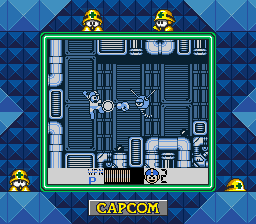 The leader of the Stardroids and all around jerk throughout the game. His Spark Chaser is slow but paralyzing, and able to track the movements of its target. According to his Mega Man & Bass CD data, he has a fondness for shampoo. He probably needs a lot of product to keep his green mane so luxurious… [Weakness: Deep Digger]

This Stardroid goes all T-1000 by shifting into a liquid metal blob when he’s not shooting his Grab Buster (called Snatch Buster in Japan) at Mega Man to sap his health. The sneakiest part of this weapon is that it can snatch E-Tanks as well. [Weakness: Black Hole]

No, it’s not a girlbot, but he’s based on a crab, walks like one, and attacks with floating sea foam Bubble Bombs. Said deadly scrubbing bubbles float up and can trap Mega Man like Burst Man’s Danger Wrap. He’s also a neat freak and shampoos his head. [Weakness: Photon Missile]

A rolling tank ready for war! He can’t jump, but he doesn’t need to. He loves to spam his Photon Missiles and drop a few mines on the floor. Luckily, each weapon has a bit of a delay to give Mega Man enough time to dodge them. Too bad this flaw also applies to Mega Man after gaining his Missiles. [Weakness: Salt Water]

His eagle design, aerial abilities, and electrical powers all scream Zeus. Using a megaton bomb to power his thrusters, he stays up in the air, stopping only to charge up his Electric Shock. The only problem is that he’s a sitting duck up there from his Achilles’ heel at every other time. [Weakness: Bubble Bomb]

Hula hoop fan and master of time and space, so he can freeze Mega Man in place like Flash Man or Bright Man. His main weapon is creating Black Holes that’ll suck Mega Man in with his epileptic swirling ring. Oh, and he hates video games. This bastard has to pay! [Weakness: Electric Shock]

An oxen-based boss. Doesn’t really fit into its Greco-Roman god analogue’s motif, but oh well. His Deep Digger weapon is good for picking up certain blocks and nothing else. He does have a cheap instant death crush move if Mega Man doesn’t stay close to him during the fight, which really is a load of bull. [Weakness: Break Dash]

You’d figure this Stardroid would look more grim reaper than feline. At least he’s dressed for the cold. He’s also fast, zooming up to the walls with his Break Dash move, a feat Mega Man can use to break certain walls when charging it up. Though his namesake is no longer classified as a major planet, at least Capcom remembered that the dwarf chunk of rock does orbit the sun closer than Neptune half the time, thus numbered as such in the boss order. [Weakness: Grab Buster]

This Atlantean mer-manbot loves to splash corrosive Salt Water to rust out any opposition. Despite his planetary alignment, he’s actually one of the first four Stardroids Mega Man has to face. His stage isn’t water-themed, for some reason. That gimmick is saved for the waterfalls and bubbles in Venus’ level. [Weakness: Spark Chaser]

An ancient doomsday weapon unleashed by Dr. Wily. (Yeah, he’s behind all of this. Shocking, isn’t it?) Too bad the doctor couldn’t control this monstrosity and is the first to feel its wrath. Its purpose is stated clearly: He must destroy all inferior forms, living or robot. [Weakness: Spark Chaser] 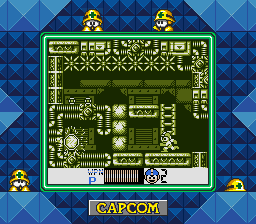 The game makes use of the Super Game Boy features, sticking to the basic shifting four color palette for the stages while featuring a nice NES-style color scheme for the stationary HUD. It’s a nice little extra to help differentiate each level, as many of the Stardroid bases tend to blend together. Graphically there isn’t much of an improvement from the last Game Boy outing, even trimming the use of big sprites during the lengthy cutscenes. Kouji Murata’s given full reign on the entire game score, no longer stuck with rearranging NES tunes for 70% of the game like the last two Game Boy games. Sadly, many of the compositions are not as high energetic as some of his prior work, mostly going for more subdued melodies. Much of this vague graphical and audial downplaying is due to the space theme. While this makes for some nice gravity-based stage gimmicks, a few fall flat with conveyor belts, excavation caves, and bouncing bubble floors. 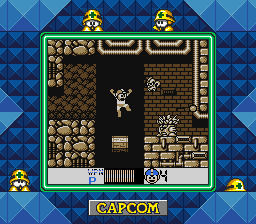 Mega Man V does try to wrap up the Game Boy series nicely and makes a bit of final experimentation. There are two enhancements for the Mega Arm that can be bought with P-Chips, one causing his fists to latch on and strike multiple times against an enemy, and another to grab and retrieve items in its grasp. In the latter half of the game four hidden crystals can be collected, offering a special item that halves weapon energy consumption. The final stage starts off with a Rush Jet space shooter level, leading to a boss battle with the defenses of Wily’s Death Star. Mega Man V also has a Robot Master rematch teleporter room as well as a Yellow Devil analogue known as Dark Moon. If that wasn’t enough, the massive Wily Star houses rematches with all three Mega Man Killers and Quint. Most shocking of all, in a rare twist, Wily is not the final boss, quickly backstabbed by his trump card of unleashing Sunstar on our hero. Naturally, Mega Man hops into Rush and escapes as the Wily Star explodes, though Wily miraculously also survives to do evil once again. 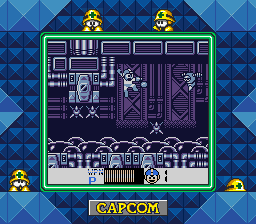 A Game Boy Color upgrade much like Wario Land II or Legend of Zelda: Link’s Awakening DX was planned for a late 1998 release, but was eventually dropped alongside the colorized ports of Metroid II: The Return of Samus and Kirby’s Dream Land 2. It wouldn’t be the last chance at colorizing the Game Boy Mega Man games, but as will be seen, no official method outside of the Super Game Boy transpired. 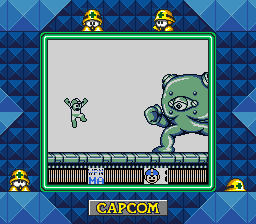