Wily’s up to his old tricks again – wait, scratch that. Wily’s gone senile and taken over a soccer field with his Robot Masters and explosions. Obviously the only way to stop him from taking over is to beat him at his own game… of soccer. 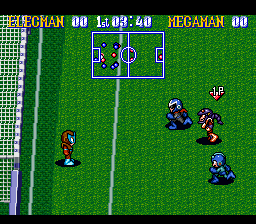 Okay, maybe a silly mascot take on sports shouldn’t be too story-heavy, but the intro cutscenes for the Championship mode do play out this way. Outside of that suppose-to-take-seriously moment, it’s a fairly light-hearted arcade-like spin on soccer, closer to the Kunio Soccer or Dodgeball titles than the more over-the-top Super Mario Strikers. The Mega-fied version of the sport gives every robot differing stats and unique weaponized special kick shots, along with gaining teammates with each win in Championship mode. The game also has the usual free Exhibition play and Tournament modes, along with the ability to play as one of 8 preset teams in a league to battle for the top.

It’s too bad the game itself lacks much fun. Outside of the franchise skin and NBA Jam levels of rule-breaking, there’s nothing that makes it stand out from most soccer games of the time. The various flaws in gameplay make it hard to recommend for many fans of the series, too. The players are big, but your view of the field is cramped, leaving you following dots on the suspiciously large mini map of the field for openings and fellow teammates to pass to, further blocking more of the area around you unless you toggle it off, leaving you blind of anything just off-screen. 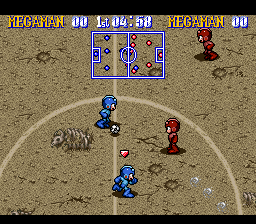 You only play as the player in control of the ball, or the nearest defender to the other team’s player with no ability to toggle to another when needed or any way to lead the bad team AI. Playing against the CPU is another story, with each player covering every nearby passer or charging straight to you with keen precision while your scrap-for-brains teammates scatter across the field. The only way the AI tips in your favor is in kicking right in the corners of the penalty arc, sending the ball past the coding’s blind spot for easy goals. Once you’re able to wrestle the stiff contols to those spots or can find the tiniest of openings to pass to there, of course. 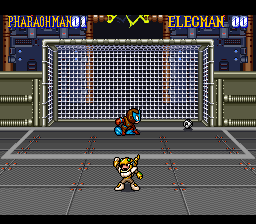 All signs point to a rushed and/or hell of development, lacking many reveals to the press after an early announcement in Game Players magazine in early 1993. Many aspects were either left out, unfinished, or dormant in the game’s code. An option to use a multi-tap for 4 players was planned, as well as playable Guts Man and Heat Man. Guts Man was featured in the original sketch for the Japanese cover, replaced by Proto Man in the final box art. Though Wily serves as the final opponent team leader in Championship Mode and can be randomly available as a teammate in Exhibitions, the ability to unlock him as selectable leader is missing, forever sitting partially offscreen in the menu. The endings for League and Championship are missing too, though cheat codes make it possible to view the the latter. Even the scrolling credits are lost in the code, unable to be viewed outside of cheat codes in the Password menu. 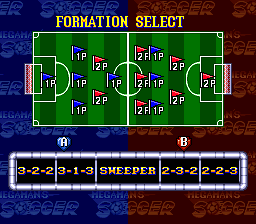 It’s obvious that Capcom didn’t put as much love into this title, shipping an unfinished non-fully tested game to the masses to become a mediocre sales and critical oddity. This one’s only for those wanting to see 16 copies of Enker chasing after a ball for a few minutes. The time will pass slower than you’d think. 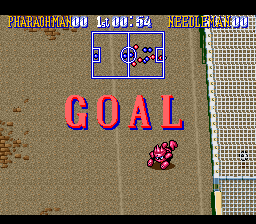