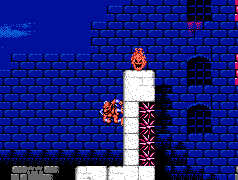 Gargoyle’s Quest was fairly successful, so naturally, Capcom made a sequel. There was still a Game Boy version a year later, but the development team originally transferred their work to the NES, which is also the only version that made it to Western shores. An odd move in 1992, when the SNES and Genesis were dominating the console market. Gargoyle’s Quest II is the typical Capcom sequel. It’s almost the same game as its predecessor with new levels and some tweaking, plus there’s a lot of perks involved with the more powerful NES version. 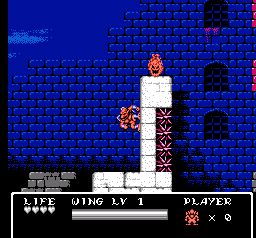 Gargoyle’s Quest II doesn’t seem like it has anything to do with the story of the first game, although the game is generally considered a prequel. Our hero, once again the titular Red Arremer (or Firebrand in the West), is a young demon who lives in the town of Etruria. At the beginning of the game, he commences his training to hone his skills as a warrior in some sort of alternate dimension. However, while he’s gone, a mysterious darkness sweeps over his town. He returns to find everyone dead. The king of the town, Morock, bestows upon Firebrand the Spectre’s Fingernail, and with his dying breath, sends Firebrand on a mission to save the Ghoul Realm from this evil.

As mentioned before, Gargoyle’s Quest II plays pretty much the same game as the first game; the structure essentially identical. Once you set out on your journey, a series of town-hopping and fetch-questing ensues and you’ll have to help each monarch of each town by finding an item in a dungeon, and in turn, they will grant you a new power that allows you to press on farther into the adventure. The structure and the style of level design is also the same, just with slightly more depth and better execution. The design of the environments is a lot smarter: The stages now much more closely resemble the later released Mega Man X, with lots of vertical wall-jumping segments. Enemy placement and unreasonably precarious jumps can still be an issue, but they’re much easier to deal with in this installment, thanks to the greater view radius on the NES. The fact that everything is zoomed in closer is the most annoying change in the Game Boy port. On the world map, you can only see about half of what you see in the NES version. The sprites are all bigger, but it appears that you’re moving much slower when it’s really about the same speed as in the NES version. This is especially annoying in some of the stages, because things you’re meant to see just at the edge of the screen in the NES version are totally obscured here. This makes some of the heavy pit-jumping segments with moving platforms a nightmare now because you have to guess where they’ll be as you jump. The world map still ties all the areas together, but the random battles have been removed, thankfully.

One of the biggest improvements are the boss battles. While they’re still a bit on the easy side, at least they now require a bit of figuring out strategies and can’t be won simply by finding a nice spot in a corner and mashing the B button and jumping occasionally when the boss feels like throwing something at you. The bosses are a lot more aggressive and have more devious ways of dealing with you, often using attacks that require you to move constantly. You’ll also have to make fairly good use of the terrain in almost every battle.

Graphically, it goes without saying that Gargoyle’s Quest II looks way better than the first game. The infinitely larger color selection and added levels of depth and detail on the NES make the games look a generation apart despite their overall similarities, and the Game Boy graphics look nicer and less obviously tiled, too. The design is also a lot more dark feeling and fitting for a place called the “Ghoul Realm”, with some really menacing and macabre areas. On the NES it is one of the best looking games for the platform. 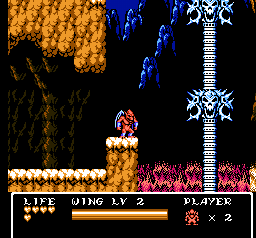 The music holds a similar style to the first game, but the composition is much better. There’s a lot of variety, and the themes never get old. They do a really good job of simulating gothic, orchestral music with the NES’s primitive sound chip. 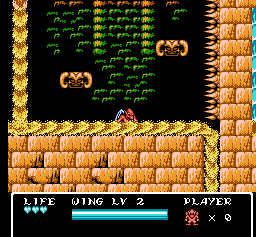 On the Game Boy, the game has been extended somewhat with the addition of new areas. Some of these areas use entirely new design motifs never seen in the NES version, such as a slippery ice cave and a swamp with spikes that rise up from the ground and lower back down. None of these areas are obligatory, as making them so would alter the course of the game, but they’re still pretty interesting to visit and tend to be more intense than most of the areas converted from the NES version. 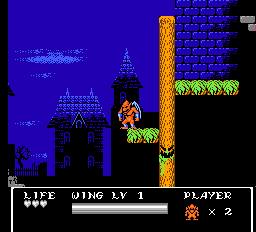