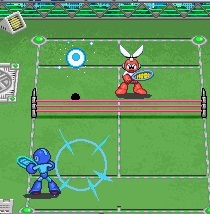 If you think Capcom wasn’t going to milk one of its major cash cows in the mobile scene… well, of course they did. All six of the NES games as well as Mega Man 9 and 10 were ported to various Japanese and a couple formats on mobile devices in various fashions, but the Blue Bomber’s been brought onto multiple phone-only games of varying quality and care since the turn of the century. 2001 saw the release of Tobe, Rockman! (跳べ、ロックマン！), a very simple game that works like a multi-screen Game & Watch type game. All the jumping and none of the shooting Mega Man’s known for, leaping up platforms and dodging enemies to reach Roll to save her then restarting to do it all over again.

In 2003, Capcom started the first big mobile offensive with no less than four titles. Rockman Panic Fire (ロックマン パニックファイア) is a strange puzzle-like take on Bomberman where Mega Man can’t attack, merely dodge the explosive flames set by multiple Fire Men until the Blue Bomber finds the exit. All the fires can set off chain reactions with all the bombs lying around the stages. Rockman Bug Sweeper (ロックマン バグスイーパー) is a Minesweeperclone with a touch of Blue Bomber coating added, and in Rockman Slot (ロックマン スロット) Mega Man is caught in Dr. Wily’s one-armed bandit. Somehow he still has the original six Robot Masters to battle/gamble against. Rockman Space Rescue (ロックマン スペースレスキュー) is a sort of Solar Jetman-like game with Mega Man flying in space, having to watch his fuel gauge and use his inertia to save stranded astronauts. A Christmas variant title Rockman Rocket Christmas (ロックマン ロケットクリスマス) made the hero play Santa to drop presents for good kids.

In the following year, those were followed by Rockman GP, a Sonic Drift-quality racer with only Mega Man, Roll and Bass to control – nowhere near the level of Battle & Chase. Rockman Pinball (ロックマン ピンボール) was a nice little Mega Man-flavored pinball game with three little tables for Bubble Man, Air Man and Quick Man, with a secret final Crash Man-inspired Dr. Wily table. This is one of the few mobile games to be released outside of Japan. 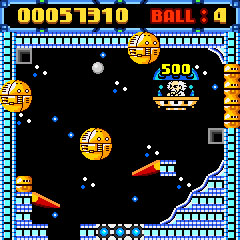 A few years later, in 2007, Rockman Tennis (ロックマンテニス) made six robots hit the court with a special guest appearance of X. Each character has his own special move much like the Mario Tennis series, and Auto runs a shop where the player can purchase upgrades to level up the characters. 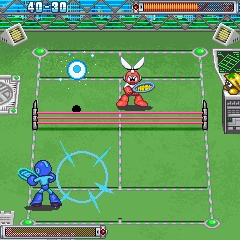 In Chokkan! Rockman (直感！ロックマン, 2008), Dr. Wily hides in his impenetrable capsule before Mega Man can bring him to justice, but Roll phones in to relay a suggestion to shake the big capsule, causing twelve silly mini games to fall out. The selection spans simple dodging survival games to shooting galleries to a rhythm dance off against Elec Man to a Roll cooking game to making Dr. Wily dizzy – kind of wacky, but nowhere near WarioWare-level madcap insanity. 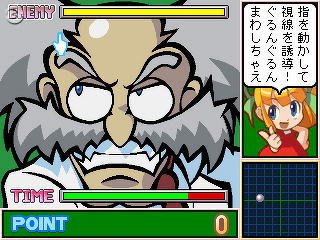 Mega Man Rush Marine (2009) is a North American exclusive mobile shoot-em-up title. Not all of the game takes place underwater, though, as it also contains Rush Jet segments. Gradius it ain’t with its bland aesthetic from the new cheaply modified enemy sprites and level design, making it feel like a Newgrounds Flash game. 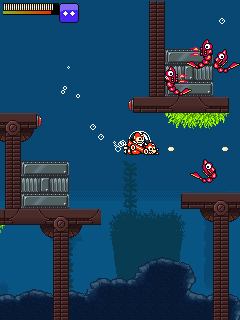 Then in 2011-2012 there was another wave of small games in Japan. Rockman Diver (ロックマン ダイバー) is a basic endless game where Mega Man keeps falling and has to dodge spikes. Rockman no Dot Art Logic (ロックマンのドット絵ロジック) is a Picross puzzle game with Mega Man themed pictures to solve. Rockman The Puzzle Battle(ロックマン ザ パズルバトル) is a Bejeweled clone featuring all the Robot Masters from the first game. Each Robot Master use their special weapons to make things difficult, but the player can earn them to turn the tables. From 2012, Rockman Solitaire (ロックマン ソリティア) is a standard Klondike solitaire with a Mega Man skin, and Rockman Poker (ロックマン ポーカー) is another themed parlor game, though the character art is really nice. 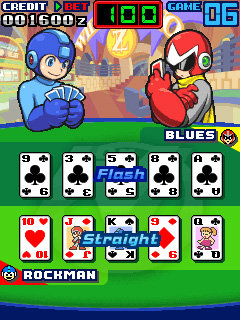 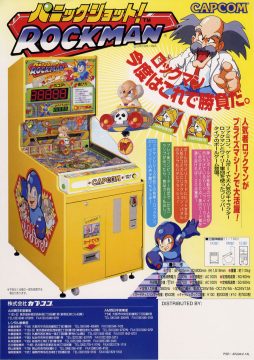 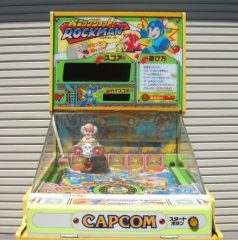 It’s a half-pinball, half-prize game starring you-know-who! There are many versions of the rare machine produced, but the goal is the same across each one: hit as many targets with your balls as you can in the given time. Cutout targets with Robot Masters or Mets sit in the back of the board, each worth 100 points. For big scores, it’s best to aim at the moving Wily UFO for 1000 points, causing him to light up and yell. The prize for a good enough score are Super Barcode Wars cards with either Mega Man or Proto Man, possibly more. 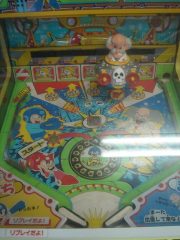