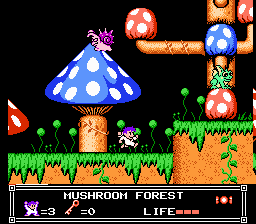 Little Nemo in Slumberland was an American comic strip that began in 1905, written and illustrated by Winsor McCay. It ran for over twenty years, and told stories of the often crazy dreams of a boy named Nemo. In 1990, Capcom released an NES video game based on the property called Little Nemo: Dream Master, which seemed like an odd thing to resurrect, considering the comic had been out of print for decades. But it was actually meant as a tie-in for a animated motion picture released in Japan around the same time, though the English language version didn’t come out until two years later in 1992. In both the game and the movie, Nemo is brought to the magical world of Slumberland, where he’s called to be a friend to the princess Camille. Ultimately, the Nightmare King ends up escaping from his prison and kidnapping the royal family, so Nemo sets out to the rescue. 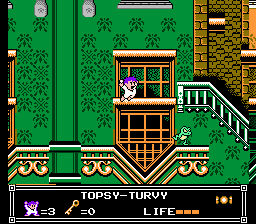 The NES game plays like a typical NES side-scrolling platformer. The stages are based on assorted child-friendly dream-like areas like a mushroom forest, a toy locomotive, an upside-down room, and an area where the everything in the landscape is gigantic, similar to Rescue Rangers. Each stage is introduced with Nemo meeting some dream character or another, and only one of them (a green-faced clown named Flip) is given a name, so it assumes that the player is familiar with the movie and knows who these other weirdos are. They give “advice” for things that are either redundant or obvious so there’s not much of a point to them, though the level  title card cutscene of Nemo hopping into bed and settling down for a dream are amusing.

At the outset, Nemo can only defend himself by throwing little pieces of candy, which doesn’t do much other than briefly stun most of them. However, it owes somewhat of a debt to Super Mario Bros. 3 as it features something akin to its animal suits. Certain friendlier animals will happily gobble up those sweets and then take a nap, allowing Nemo to either ride them or use their body as a skin (!!). In order to complete a stage, you need to obtain a certain number of keys, and those animal helpers grant the abilities needed to reach every nook and cranny. Nemo can take three hits on his own, though other animals can extend this by an extra bar or two. 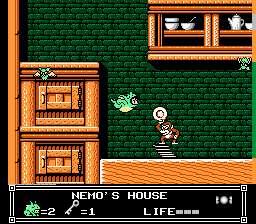 The central conceit here is just fine, but in practice, a lot of the animal forms are just kind of awkward to use. One prominent one is the frog, which lets you high jump as well as kill enemies by leaping on top of them. The trade-off is that it also walks incredibly slowly, which means you need to constantly jump to pick up the pace. Another regular one is the lizard, which lets you climb on walls and sneak through small areas. It has no offense or defense mechanism of its own, though, and even its jump is fairly low, so it’s difficult to leap over enemies. A few other animals are similar and do let you attack, like the ape and the hammer-wielding mouse, but even they are awkward to use thanks its their small hitboxes. The bee is one of the better ones, because you can not only fly but also shoot out stingers as projectiles. But you can only flap its wings so many times before it gets tired and you need to rest…and since there’s no onscreen indicator of its strength, you need to keep track of it yourself, lest you flap too many times and find yourself without a platform to rest on, potentially sending you plummeting into a pit.

The key hunting is a little annoying too. It’s obviously not much of a problem if you’ve played the game before and know where to find everything, or you’re playing with a Nintendo Power map in front of you. To its credit, they’re rarely actually hidden so it’s not like you need to do anything super obscure to find them. But it sure is a hassle if you come across the end of the stage, find that you missed something, and then have to double track back across the entire level hunting for it. A few levels are focusing primarily on platforming (like the train and rooftop stages) and so the keys are generally found in easy-to-reach areas. 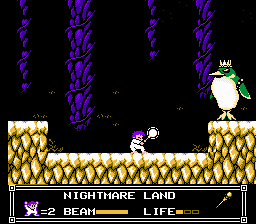 However, the key stuff gets chucked out the door in the final stages, Nightmare World, which is this game’s equivalent to Dr. Wily’s Fortress. Not only are these areas more straightforward, but Nemo gets an actual weapon in the form of a magic wand. He can bash enemies with it, plus he can also charge it up Mega Buster-style to shoot an energy projectile. The catch is that these can only be shot at an upwards 45 degree, so it’s not entirely useful for regular bad guys. But all of the boss encounters in these stages are built around this ability, and so it provides a unique sort of challenge to use it effectively. The Nightmare area also has the best part of the soundtrack, something that could easily fit in with one of the better Mega Man games. The title screen tune is catchy, as is the theme for the opening level, but otherwise the music is fairly unremarkable.

These Nightmare stages are also quite a bit tougher than the rest of the game, filled with flaming pillars and every video game heroes’ long time nemesis, insta-kill spikes. One area in particular has a constant stream of dandelion seed enemies, which waver back and forth until they home in on Nemo’s position. These are found earlier in the game but here they’re positioned in such ways that make them a constant threat, even when you can whack them with your wand. Perhaps the higher difficulty was a course correction for easier games like Duck Tales and Rescue Rangers, though overall it’s not overwhelmingly hard. There is no password function, but there is stage select cheat that lets you play any level.

There are issues with Little Nemo that keep it from riding alongside Capcom’s better licensed games…but the company almost always put out relatively decent software, so even at its more aggravating moments, it’s still a pretty decent B-tier platformer. 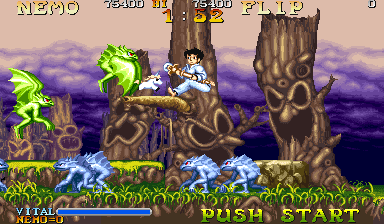 There was also an arcade game released around the same time as the NES title, though it doesn’t seem to have gotten much of any distribution, so it’s barely known at all. This is coupled with the fact that it’s a licensed game and never saw re-release unlike most of Capcom’s other arcade titles of the era. The game is simply known as Nemo and while the concept is basically the same as the NES game, it’s a completely different title.

Ditching the key-hunting or the animal-wearing gimmicks, it’s pretty much a straightforward action game, with two player simultaneous play, with one player controlling Nemo and the other controlling Flip. Nemo has the magic wand as found in the Nightmare levels of the NES game, but it’s just used to stab things at short range, while Flip uses an umbrella that acts identically. Both can also hop on enemies to kill them, and can also pick up crates, barrels, and other things to throw at foes. Every once in awhile, you’ll find a power-up that lets the heroes bash the enemies across the screen (as opposed to just killing them), killing everything that gets in its way. It’s the sort of power that probably should’ve been the default, and could’ve used for some interesting encounter design or simple puzzles, but as it stands, it’s underutilized. Each character also has a few lives and a relatively generous life meter.

Some of the areas will be familiar to NES players – for example, the first stage in the arcade game takes place on a moving train in a gigantic toy room, which was the third stage in the NES game. In the final stage, you’ll also see the Nightmare King hanging out the background before you reach him for the final encounter, though here he actually uses his arms to attack you directly as you climb up the towers to meet him. Other areas are original, like when you hoard off enemies while riding a boat over the sea, plus a weird boss fight against a sort of bubble enemy that looks like it came straight out of a Gradius game. Whenever you return from a lost life, Nemo returns onto the field with his flying bed, an aspect from the movie that never really saw much use in the NES game outside of its appearance on the box. 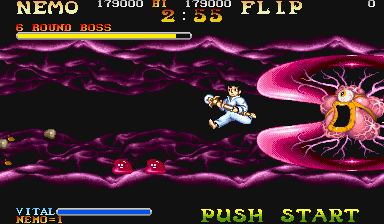 There’s not much particularly distinct about the arcade Nemo, other than it looks and feels like a typical CPS-1 action game. Again, Capcom games were generally pretty quality and this one is no different, even though they’ve made other better games, both artistically and mechanically. 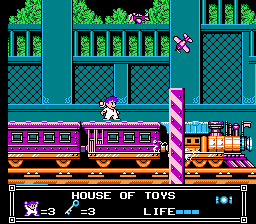 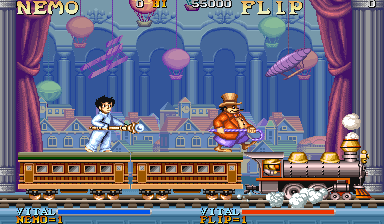 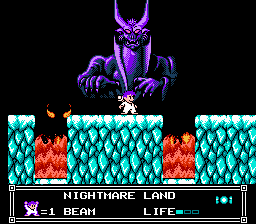 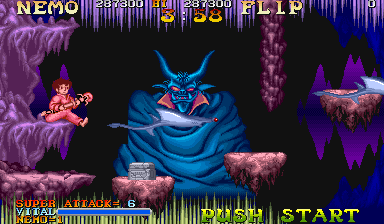 Though technically unrelated to the Capcom games, American indie studio Pie for Breakfast Studios is working on a new side-scroller based on the original comic strip. It’s described as a non-linear platformer in the vein of Wonder Boy: The Dragon’s Trap and Monster World IV, and has some absolutely gorgeous drawn artwork, as seen in the work-in-development screenshots.