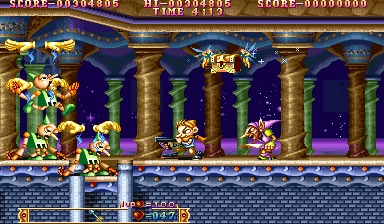 In 1991, Capcom decided to release a very unusual coin-op consisting in three relatively short games of different genres: an action platformer, a shoot-em-up and a puzzle/maze game. It was a pretty good idea – arcade owners could get three games in the same cabinet, probably inspired by the versatility of SNK’s MVS system. Curiously enough, the first two were also related, one being the direct sequel of the other, starring the same characters and having the same art style. These “wonders” are called Midnight Wanderers, Chariot, and Don’t Pull; the game was later ported in 1998 on PlayStation and Saturn, and then again in 2006 on the second volume of the Capcom Classics Collection.

Let’s start with this game, since it is unrelated to the others and there’s not much to say about it anyway. Don’t Pull is basically a colorful, plotless Pengo clone where the players can control two cute anthro animals named Don and Pull (see what they did there?) that can push blocks to squash two kinds of enemies that spawn from manholes: jumping jellies and bipedal fire-breathing dragons. Other obstacles are boulders that roll around the external border of the levels. One of the levels’ goal, besides crushing all the baddies, is to put together three heart blocks to gain lots of bonus points and render enemies harmless for a while. There’s also lots of fruit and candy bonuses to gain extra lives and score, and completing stages in a short time also nets lots of bonus points  Every two stages there are brief “intermission” animations, adding to the old-school experience. 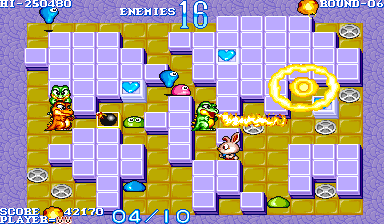 The gameplay is simple but the enemies are stubborn and fast, even more so when they get angry after a while. There are 32 rounds in total and the first 16 are the “Beginner’s course”, but stages are chosen at random so it’s difficult to formulate a strategy to get far in the levels. Don’t Pull is a “pure” arcade experience, where only the search for the best score matters, and as such it’s okay for it to be a mini-game of sorts inside an arcade title.

The first of the two related titles is a fantasy action platformer/run ‘n gun starring two elfin characters named Siva and Lou. The kingdom of Ashtar is under attack by the demon Gaia (a bizarre creature that looks like a globe with a face and clouds for arms), who stole its most important artifact, the Chariot of Light, and turned everyone into wooden statues. Enter Lou and Siva, the titular wanderers (or “roosters”, according to the original Engrish title), who want to defeat Gaia to save their friend who became a statue. 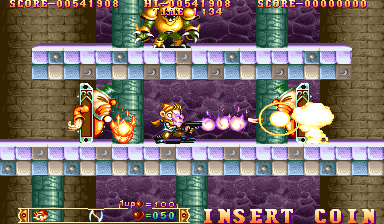 The game plays similarly to Capcom’s earlier Ghosts n’ Goblins, but more fast-paced, less hard and with a more zoomed-in view. It has the same two hit-points system where the characters lose their clothes after getting hit, the same denial of diagonal shooting and the same kind of treasure boxes holding power-ups that come out of nowhere. There’s also a bit of Strider thrown in, namely the players’ ability to latch onto ledges and platforms and then hit enemies from above or below, and also the opportunity to find and summon a few helper characters (a living flame, a tiny ghost and a floating eye). There are four different kinds of shots to pick up and playing cards scattered everywhere that need to be collected to rack up extra lives. The levels however are only five, but most of them are divided in parts by the appearance of mid-bosses.

The game has a peculiar Westernized art style with muted colors, seemingly inspired by stuff like fairy tale books, tarot cards and astrological illustrations, that Capcom never really employed again outside of this coin-op. There are some whimsical enemy designs such as jack-in-the-boxes, marionettes operated by floating disembodied hands, moons with faces that turn into crying crescents the more they get hit, and rotating things based on Humpty Dumpty. Bosses are more menacing but no less strange, in particular a thing that consists of a bouncing head surmounted by an arm that wields a huge knife. Despite being only a short game that is one third of an arcade title, everything has also a grand adventure feel, what with the brief cutscenes between the levels and the interesting musical themes.

Midnight Wanderers is a nice little game that feels like a distillation of the late 80s/early 90s Capcom style and could have been a game on its own, being easy to learn, fast-paced, balanced and great to look at.

The sequel game is a horizontal shoot-em-up that starts a while after the end of Midnight Wanderers: after defeating Gaia, the wanderers recover the Chariot (which doesn’t look at all like a chariot, by the way) and use it to soar into the skies. Their goal is reaching the castle of Lar, the man behind Gaia, to defeat him and rescue the kidnapped princess of Ashtar. Lar is another weird being, a clownish sorcerer with arms made of fire and a sun-like mask for a head. 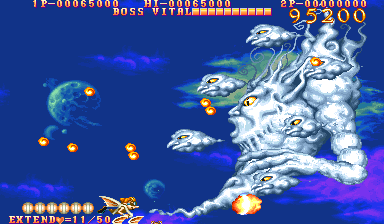 Chariot is a simple but tough Gradius-esque shooter where the heroes can choose between either wide or rapid shots, pick up heart symbols to gain extra lives, but has at least one interesting feature: there are so-called “options” which are more powerful energy bullets that are collected (up to seven of them) in a “tail” that stretches behind our heroes. This tail can be used to deflect and destroy bullets and enemies that come from behind (they are consumed but refill after a little while), giving the game a little more strategy and making the players more careful in managing their ammo, unless they want to leave their back side exposed. The game also “tricks” the players into wasting the options by displaying the words “Push B button” when facing the mid-bosses; by the way, these are palette-swapped winged humanoids with a vaguely sci-fi aesthetic that clashes a bit with the general fairy tale-esque setting.

After playing a while it becomes apparent that Chariot is heavily built around Midnight Wanderers‘ assets. Some enemies are recycled from the previous game, but there still are some new creations like shifty-faced clouds connected by lightning between them and flying steampunk contraptions. The levels have repetitive, copy-pasted graphics and go from the obstacle course that is level four to the uninspired level five, which is short and consist mostly of an irritating meteor shower. The seventh and last level also has the usual boss rush, just to make the game a little bit longer. Speaking of bosses, these huge creatures are the most striking feature of the game, and half of them are based on signs of the zodiac. Some of them also become a bit disturbing the more they lose energy, such as the bisected and skull-faced Sagittarius or the rotting and snake-infested Gemini.  All of them, however, make the same stupid “belching” noise when hit.

In short, Chariot is an example of a decent shoot-em-up, that however after the first two stages becomes fairly clearly an incomplete effort, instead of a game that could stand on its own. 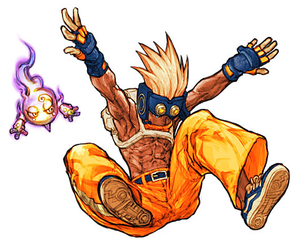 These games didn’t have an actual sequel, but their characters as per Capcom’s habit made a couple cameo appearances afterward. Lou appeared as an assist character in Marvel vs Capcom: Clash of Super Heroes (1998), having much of the same animations and attacks including the appearance of his own helper character. If the second player chose Lou as an assist too, he will get a palette swap that makes him look like Siva. Another reference is in Cannon Spike (2000), where the character of Shintaro Shiba is vaguely inspired by Siva and is even followed around by a flaming, floating little robot that looks like one of the helper characters from Midnight Wanderers.

The “resurrected” SNES game Nightmare Busters (made in 1995 but not released until 2013) by Arcade Zone, starring a couple of leprechauns, appears to be heavily inspired by Midnight Wanderers, down to the graphic style, fairy tale setting (with a darker spin), enemies popping up from the ground and similar bonuses, domino tiles instead of cards. 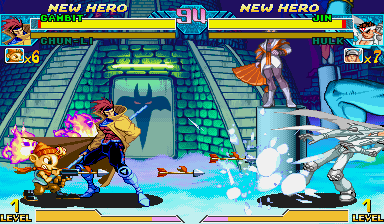 Another likely homage, this time to Chariot, can be found in the 2017 cartoony run-n-gun Cuphead by Studio MDHR. One of the game’s bosses, Hilda Berg, can turn into zodiac-inspired forms as an attack, including Gemini and Sagittarius; while this is not enough to say Cuphead‘s devs were inspired by the Capcom game, the fact that Hilda’s final form is a mechanical crescent moon almost certainly is, since that form is reminiscent of Chariot’s second boss Hypnos. On top of that, another Cuphead boss, Cala Maria, acts similar to Chariot‘s final boss Lar in that she sheds her whole body after being damaged enough and is reduced as just a floating head.