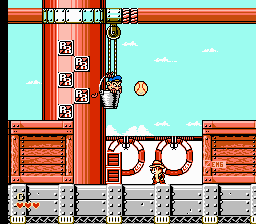 Chip ‘n Dale Rescue Rangers 2 was the final NES Disney game released by Capcom, in 1994. Considering how long the SNES had been available, it’s strange that the sequel to the original Chip ‘n Dale didn’t make the jump into the next gaming generation.

Fat Cat has escaped from jail and has stolen the Urn of the Pharaoh in the process. Not keen on the idea of allowing Fat Cat to roam free, Chip and Dale take it upon themselves to reclaim the urn and return the portly cat to jail. 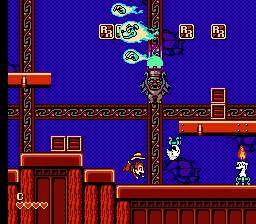 First and foremost, Rescue Rangers 2 is more of the same. The areas Chip and Dale explore are larger compared to themselves, the platforming elements are still strong, and the level design is enjoyable once again. The graphical palette, on the other hand, is muddy in the early levels and very unattractive. The later levels do brighten up and reclaim the old charm that the original game had, but it’s a poor first impression.

The biggest improvement Rescue Rangers 2 enjoys is the boss battles. The fights have graduated from the ball chucking formula of the first game and have added upgraded boss attack patterns and battlefield hazards. The first boss fight, for example, is against a water-shooting rat that constantly leaps from platform to platform while attacking you. The platforms are flooded by water which gradually drags you down to a chasm at the bottom of the stage. It’s challenging and is a welcome change from the mind-numbing fights of the original.

The bosses are the only things that have been improved upon, which is the main problem with Rescue Rangers 2. If you’ve played the first, you already know what to expect from this installment. It would have been nice to see new items, branching paths, or multiple endings. Instead, the map screen was completely eliminated, and the game made much more linear. It’s another example of wasted potential that Capcom could have taken advantage of.