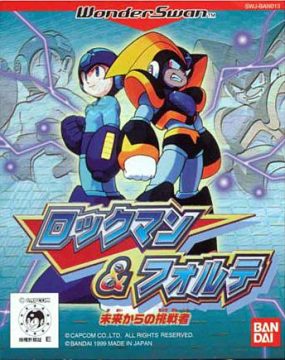 Early in the WonderSwan’s inaugural year, the portable system was starving for big titles. Bandai contacted Capcom to lend their Blue Bomber for an exclusive romp on the black & white Game Boy competitor, which acts as a sequel to Rockman & Forte. The Dimensions, Robots from the future led by a Mega Man-looking villian, attack the peaceful Symphony City. Both present-day doctors send their star robots (Proto Man sits out on this one) to investigate and stop the time travellers.

A big gas stove burner with flame-based attacks. Even though his design is goofy, Konro is a favorite of Hitoshi Ariga and even had a cameo in Mega Man ZX Advent as the unlikely hero of an in-game digital comic. [Weakness: Rockn Vulcan / Forte Vulcan]

A cheap Air Man knockoff wielding paper fans in his fists. For some reason, his stage is a water level, and the only level that uses the Wonderswan’s vertical mode. Defeating him gives Mega Man the Barrier Wind weapon and Bass the Forte Cyclone weapon, the weaknesses for most of the bosses in the game. [Weakness: Flame Shower / Flame Mixer]

This Dimensions Robot Master is based on the travelling mendicant monk of the same name. Wielding a shakuhachi bamboo flute, he’s able to conjure flaming pillars and illusionary copies of himself. His dropped Doppel/Doppler weapons make Mega Man and Bass invincible when the attack button is held down before their respective strikes are released. [Weakness: Barrier Wind / Forte Cyclone]

Two Robot Masters at once? And they have the same time and space powers of Flash Man and Gravity Man. If it weren’t for their weakness, they’d be way too overpowered. The weapons gained from them are of course time stop based. [Weakness: Barrier Wind / Forte Cyclone]

The final Robot Master before Rockman Shadow. He doesn’t drop a weapon upon defeat, but it’s hard to tell what sort of power Mega Man or Bass would get from a robot that breaks his top half off and spins around the room while his legs try to run at them. For some reason, his weak point is the top part of his unlinked bottom half. [Weakness: Barrier Wind / Forte Cyclone]

He looks like Quint, but he’s not. He’s Wily’s prototype for an evil Mega Man, somewhere in between the creation of Bass and Zero. Regardless, he’s mad that he was passed over for Quint. After Quint’s defeat, he’s the only bad bot left in the future. Only he’s not, since Quint wasn’t destroyed. Was he? Are there Mavericks yet? Reaverbots? Whatever. He’s basically a slightly more threatening Quint, complete with his own pogo-jackhammer. [Weakness: Doppel Crash / Doppler Attack]

This licensed title comes closer to recreating the style of the official games, especially its direct predecessor, but still comes up very short. For one, the boss weapons don’t work in terms of weaknesses, as they all hit equally hard as the normal buster shots. Instead, they’re based on the amount of hits they can land on the enemies, and post-hit invulnerability is almost absent for many foes, so the balance of power falls heavily in favor of the damage-spamming wind attack from Aircon Man. This doesn’t make the game any easier, as the controls are stiff and slow, made worse coupled with being tied to the WonderSwan’s button layout. When the game forces the system’s vertical mode, movement becomes very painful to perform. Everything, including Mega Man and Bass, blends into a grey mess of sprites, making it hard to see bullets. The entire game feels like a badly-programmed pirate demake from Hong Kong. Despite being so gut-wrenchingly lackluster, the game is the only licensed Mega Man title to be acknowledge within the R20 and R25 Complete Works books as well as a tiny cameo in ZX Advent.