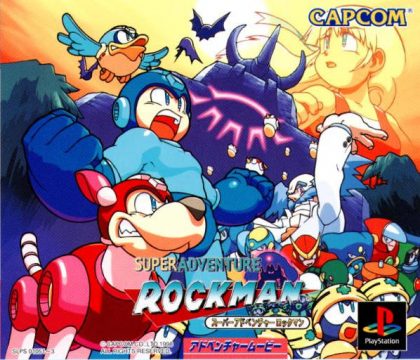 By the late ’90s, FMV “interactive movies” were a tired genre that had retreated mainly to PCs. Why Capcom would try to resurrect such a dull excuse for a game in an action-packed series like Mega Man is anyone’s guess, but they greenlit it anyway. It was developed at the outsource company Kouyousha, and the project leader abandoned ship suddenly near completion, fleeing a sinking ship like a rat sensing an approaching squall, according to claims by Keiji Inafune, who would then take over to finish the project. 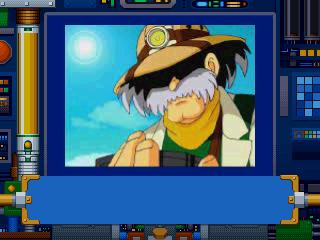 The game is split onto 3 discs, each playing like a single episode from an anime OVA complete with an intro and “Next Episode” bumper. Much of the same voices from the Japanese Mega Man 8 return including the same opening and ending themes by Ganasia. An interesting addition is the inclusion of narrator at rare segments, voiced by anime & game veteran Norio Wakamoto. Rather than looking the same way and quality as the FMVs from Mega Man 8, the art style looks quite a bit cheaper, about on the same level as the educational Upon a Star anime.

The story itself revolves around an ancient Mayan/Aztec-like ruins and temple in the Amazons (though the game points it around Panama & Colombia. This location named the “Lanfront Ruins” with its temple dedicated to the moon appeared out of nowhere and began sending out electromagnetic fields strong enough to cease any machinery nearby. Three years after the strange phenomenon arose, Dr. Wily investigates the area to help clear his name. Once in the Temple of the Moon he accidentally uncovers a powerful ancient orb deep inside that interfaces with his laptop and revives all the Robot Masters from Mega Man 2 and 3. Three weeks later, the field grows larger, affecting robots and machines around the world, including Roll. The mad doctor broadcasts his ultimatum to the UN and across the globe to wipe out every robot and machine and thus destroy the civil world in chaos. Thus, it’s up to Mega Man, with help from the rehabilitated Robot Masters from the first game, to save the Earth once again. 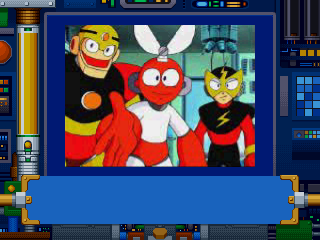 The majority of the game is spent watching video clips that go minutes at a time as the story progresses, each disc containing nearly a half hour of animated footage each. Every so often you’re given a choice in the path, though there they have no bearing on the outcome of the game. These choices can lead to items or an ambush from an enemy, sometimes only given a quick time event or segways into the game’s action mode. All the fighting is done in a first-person shooting gallery method, sometimes against grunt foes from the first three Mega Man titles but most of the time saved for the boss battles, to which there are plenty. All 16 Robot Masters from MM2 & 3 are accounted for, though in one of the few major game choices you fight either Bubble Man or Heat Man early on. It is only right at the end that any new opposition arises, and they are tough.

A super advanced alien computer orb that landed on Earth 20,000 years ago and was once worshipped as a god by ancient humans. Working as sort of a more malevolent monolith from the Space Odyssey series, it bestowed upon prehistoric man hatred as well as technology to further heighten their violence against one another.

A super advanced robot created by Dr. Wily with the help of Ra Moon. It has double the speed of Quick Man and is three times stronger than Wood Man and Hard Man. It betrays its human creator after being reprogrammed by the backstabbing alien supercomputer. [Weakness: Spark Shock] 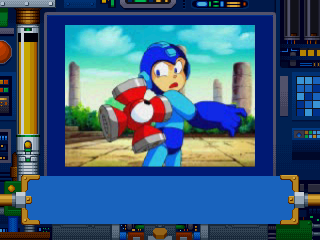 This becomes the major fault of Super Adventure Rockman: the adventure is filled with long boring cutscenes that cannot be skipped (at least they can be paused). A lot of the game is focused on Wily and Ra Moon slowly showcasing the alien orb’s powers and backstory. Meanwhile Mega Man walks along with Beat from locales. Beat adds nothing to the game or battles, merely serving as something for Mega Man to talk to out loud about the obstacles whenever Proto Man doesn’t appear. Almost every boss battle is an ambush just like the baddies, serving no dramatic build-up to the fights and merely a quick intro for the fans. The lack of music for most of the game adds to the boredom, liable to cause you to miss the sudden QTEs after long stretches of inaction. The misses from not dodging a QTE attack leads only to a simple loss of health with the rare added save from a friendly Robot Master. Outside of an early alternate boss fight, there’s no reason to replay for any branching path, since all roads lead the same way in the end, regardless of item pickup or wasteful enemy attack. The only missable items are extra E-Tanks that are used automatically anyway (via attaching to the Buster, it turns out) or extra chips that give enemy data and weaknesses in the menu. 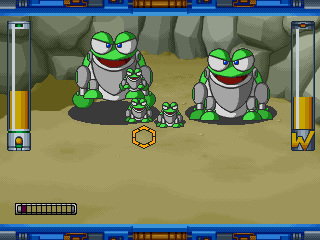 As for the battles themselves, they’re a button-mashing twitchfest. Your buster can be charged up, but the fast onslaught of enemy bullets and strikes give little time to power your blasts. You can switch to Special Weapons you earn from Robot Master defeats, but their attacks eat through energy like crazy, and there’s never enough charges per weapon to bring down the bosses alone even is you exploit their weaknesses. You also have refills available on the menu screen during the fights, but they are limited with additions only granted after each episode disc is completed, so it’s best to be frugal.

Ultimately, once you earn the unmissable Proto Shield left by Proto Man at the beginning of disc 2, there’s little reason to use anything else as it cuts all damage recieved down to a small fraction when it’s equipped. It’s a good thing, since one bad string of attacks from the enemies can leave Mega Man hurting in a very short time. This is compounded to the game sticking to using the D-pad to aim, which is slow and imprecise, so it’s best to mash away nonstop on the fire button at everything with the standard buster. Prepare to have your thumb left numb and cramping by the final New Yellow Devil fight. 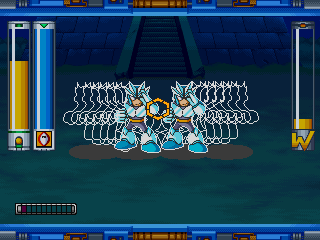 The game is surprisingly dark for a kid-friendly franchise with UN copters exploding with no parachuting pilots escaping and some of the boss deaths. The revived Quick Man has a change of heart after his fight with Mega Man, diving and taking a Shadow Blade in the back to save him, leaving his robotic corpse to be buried by the Blue Bomber later. Even the flashback Ra Moon speaks of shows the primitive tribesman visciously attacking one another with stone axes. Worse yet are the bad endings should you fail at any point, showing the whole world being destroyed with most of them having the added sad moment of Roll tearfully saying her farewell before she dies. It’s a startling contrast to the series and the game’s sillier moments. It’s also strange to have more ties to the real world with the UN council and establishing shots of the powerless New York and Paris. It doesn’t feel like the usual fun Mega Man romp.

The game never left Japan, which isn’t surprising considering the sheer amount of spoken dialogue. If there’s one thing this game doesn’t need its laughably acted performances in line with Mega Man 8 or X4. It was released on PlayStation first and Saturn shortly after, with the video codecs used being the only difference. It’s not a big deal considering most of the FMVs aren’t fullscreen, stuck with the static border constantly onscreen until the shooter battles, even during the non-action talking segments. Considering the title’s lack of content, it’s far easier to just watch the game’s video on Youtube if you’re curious at all of the story. Actually, the American cartoon even might be more entertaining, and that’s saying a lot. Inafune has actually publicly apologized for the existence of this travesty.