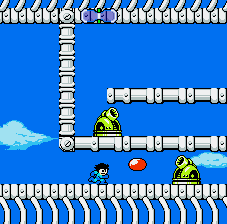 Given the popularity of the series and the widespread prolification of PlayStation consoles, Capcom ported the six NES titles onto the Sony system in Japan as separate releases, each for the discounted price of 2800 yen. Each game’s visuals and music is retained in their original glory in the aptly-titled Original Mode. Where these ports excel is all the extras and additions packed onto the CDs. 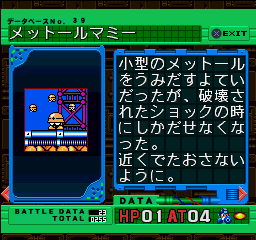 The first major update is the ability to save progress in addition to using passwords – a nice perk for the first game – though saved data mimicks the password system of old, so progress can only be saved up to the start of the fortresses. At least Capcom was generous enough to allow eight slots in the all-encompassing single block of data on the memory card per game. Each ported title also contains an enemy database where info is unlocked in tiers as more copies of the same enemy are defeated, including bosses. There’s also new and old artwork to earn as completion bonuses as well as an unlockable harder difficulty and a timed boss rush mode to beat all the Robot Masters as fast as possible. There are even added options to tweak button configuration, auto fire, controller vibration, game speed, and difficulty options. The new difficulties don’t change much in comparisons to Mega Man 9 and 10, or even America’s two challenge modifiers. “Easy” merely lessens the damage taken while Hard increases it, along with removing any and all pick-ups, which can come off rather cheap at times. Oh, and it’s possible to scroll between weapons ingame, which is always a plus. 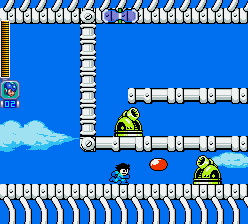 The big game changer in Complete Works is Navi Mode, which is available in each title. In this mode, the energy gauges are changed to match Mega Man 8‘s level of detail, listing the current amount of lives, little icons of the selected special weapon and the number of charges left. The pause menu is updated as well, listing the full names of each obtained weapon. Hints are given for those needing assistance. Beat and Eddie appear to point the way forward or possibly giving the best route at selected forks in the road. Exclamation marks flash on screen at choice locations, where the select button can be pressed to read advice given by friendly helpers like Roll, Kalinka or Dr. Light. The select button menu also has options to change buttons, adjust the screen, or exit back to the title screen or main menu. 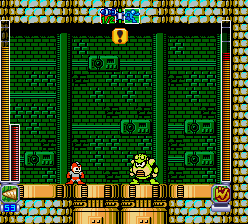 Another added bonus is PocketStation support, which allows players to download PokeRoku onto the device for exclusive mini games that can boost the health and attack power of Mega Man and the Robot Masters in Navi Mode. High level Blue Bombers can have screen-filling energy bars and buster shots wrecking tough enemies that normally would need multiple hits, while at the same time beefed-up Roboy Masters can have the same properties given to them. Now Metal Man can take up to ten Metal Blades before dying while his can kill Mega Man in in two hits. It’s even possible to make boosted robots fight with another player’s PocketStation to see who’s the strongest.

The 10+ year leap in tech came with a few fixes to certain constraints of the 8 bit classics. Sprite flickering was removed and slowdown is almost nil, making certain big boss battles no longer choppy messes. The music and sound effects are spot on, though the BGM sounds a little quieter in conjunction with rest of the audio balance, possibly due to being changed to a PCM stream rather than generated from the NES’ 2A03 chip. The lack of competing channels on the sound chip does mean that sounds don’t get interrupted, leading to no more audio cut-offs and more overlaps for sound effects. There are a few minor changes or erroneously louder samples such as Mega Man’s foot landing SFX in the first game or Hard Man’s crushing ground attack in Mega Man 3. There is also the faintest of loading times right before bosses appear or when selecting stages, but they last the fraction of a second and are only noticable to veterans of the originals. 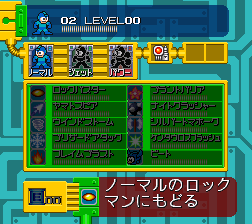 There is a major split between the first three ports compared to the latter, which got even more added content. The biggest addition is a fully rearranged soundtrack in Navi Mode. Rockman 1-3‘s Complete Works did have choice rearranged selections available with the input of a code (Hold Start + Select when choosing Navi Mode), but there were only a handful of updated tracks altogether, all of them taken from The Power Battle and The Power Fighters, leaving most of the BGMs unchanged. It doesn’t help that some tracks weren’t even based on the originals, like Top Man’s arranged score being a rendition of the Intro Stage from Mega Man 7. Not so in the latter games, where every song is given the proper rearrangement treatment, though certain songs like Napalm Man’s are still derived from the arcade releases. The Boss Attacks are expanded to Mission Mode, adding time trials for Fortress Bosses and certain stage segments as well, with a Sound Test unlocked upon clearing of all missions. Rudimentary maps of each stage are available in Navi Mode on the Select button screen, and it’s possible to play without a helmet in any gameplay mode simply by holding down R2 at the start. There are eight power-ups to unlock, two of which can be chosen for a Navi Mode session, from doubling the amount of weapon energy to jumping higher or speeding up buster shots as well as auto charging the mega buster.

All six games were re-released again under the cheaper PSOne Books label, nearly halving the price. They were also bundled all together with Rockman X7 in a special collector’s box along with pin badges in 2003. These spiffy updated ports were sadly not released stateside until they appeared years later on the PlayStation Network, still untranslated. They were, however re-ported in the Anniversary Collection with proper translations, though lacking many of the bonus features. Even the PSN digital re-releases lack PocketStation support, though it’s the least necessary addition. Even just going by each game’s Original Mode, these are ports done right, and worth the higher price compared to the downloadable NES originals on Virtual Console for the neat extras.