Not long after The Power Battle hit arcades, a direct sequel arrived, running exclusively on the CPS II. For the most part, there isn’t much new in the gameplay department. It could be almost considered a mere update like an perennial Street Fighter release, but it’s more in line with The King of Fighters in terms of boss roster shifting. 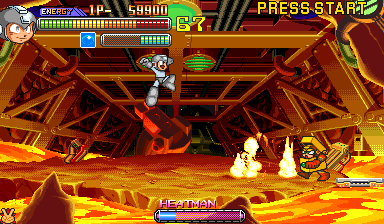 Taking place not long after its prequel, Wily has broken into Dr. Light’s lab and has stolen some crucial parts for planned robot design, along with kidnapping Roll for good measure. Like the first game, there are three sets of Robot Masters to face off against, each listed with a task to accomplish, even though all three get solved at the end: “Search for Wily!”, “Rescue Roll!”, and “Recover Parts!”. Gone is the blind stage selection map screen and in its place is a simple boss lineup to choose from. Dr. Light chimes in to drop hints for each of the Robot Masters’ weaknesses. Cut Man, Guts Man, Heat Man, Gemini Man, Gyro Man, Napalm Man, Plant Man, Slash Man, and Shade Man make their return from The Power Battle with the other half taken from the NES games. In addition to many exclusive special attacks, a few of the Robot Masters’ acquired weapons have been changed, like Centaur Man and Pharaoh Man giving the Blue Bomber the Centaur Arrow and Pharaoh Wave weapons, respectively. All of the stage backgrounds are brand-new, though a handful use similar settings, like a city or sky base. 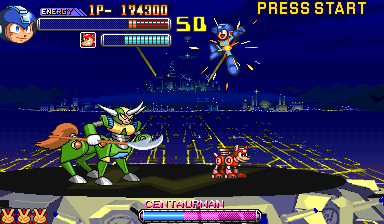 The biggest gameplay addition compared to its predecessor is the inclusion of a playable Duo, drawn to appear in the Mega Man 7 sprite style. Since this game was released mere months before the Japanese launch of Mega Man 8, his appearance serves as a tie-in, with even his ending teasing the player to buy the new home game to find out more about this mysterious new bot. His movement in this game is slow but powerful, giving him plenty of destructive power in his giant claw hand. 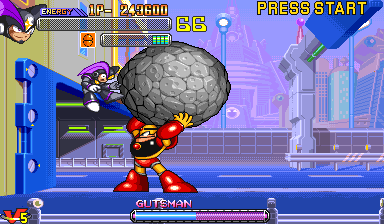 Each playable character has a distinctive special attack that is executed by charging your blaster and holding up. Mega Man has a Shoryuken-like Mega Upper, Proto Man has a massive close-range Proto Strike shot burst, Bass performs a Guile/Charlie Flash Kick-esquse aerial Cresent Kick, and Duo has a rocketing Giant Knuckle that hurls the Robot Masters to the sky, whereupon he can piledrive them to the ground. Much cut content from the former game is incorporated, like the robot animal companions. The game does a far better job at signaling use of the correct weapon against a Robot Master, freezing the game and showing the injured boss from the first contact with their weakness. Halfway through the game, the players receive a powerup that boosts either offense or defense permanently. 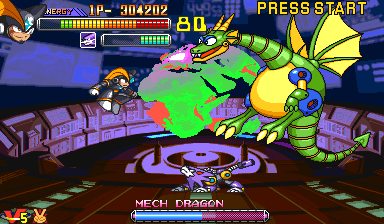 Despite all of these added perks, the game is much more difficult to clear in one credit compared to the first arcade title. The Robot Masters hit a lot harder and faster with many more helper baddies to contend with, along with an Overdrive burst of power, speed or defense once half of their lifebar is taken away. It doesn’t make things any easier that the “helper robots” forcibly take over as the special weapon, leaving the player without any means to exploit the boss’ weakness. It’s worse for Mega Man and Bass, whose canine companions don’t attack nearly as much as they should. At least Proto Man and Duo gain an invincibility shield from Beat to help block any attacks during their stay. 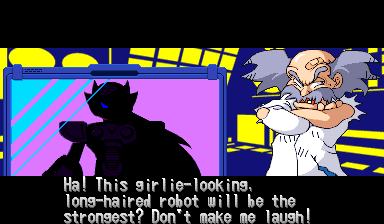 The floating Wily Fortress has gotten a few revamps as well. Depending on the chosen path, the player either faces the returning Yellow Devil, the huge Mecha Dragon from Mega Man 2, or the Mad Grinder from the intro stage of Mega Man 7, replacing the weak pumpkin mid-boss. The Wily Machine at the end is significantly changed to a giant skull with many devastating laser blasts, and only brief windows of opportunity to deal any damage to the doctor himself. It is an equally irritating fight just in a different way, struggling to land hits without wasting weapon energy. The endings are much more fleshed out, and have little differences added depending on who’s on the team in 2-player mode, giving the arcade title a little bit more replay value. The most interesting is centered around Bass, who bickers with Wily after defeating him in his lab, only to be shown his future sucessor, a certain long-haired robot whom Bass baulkingly refers to as a “girly-bot”. This reveal ties into the spin-off sequel series Mega Man X where the Wily-designed Zero is the catalyst to all of the conflict with the Mavericks. 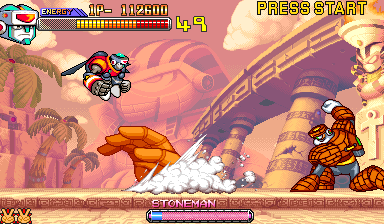 The Power Fighters is a more fleshed-out diversion compared to the original arcade game. Though it lacks many of the finesse of its console peers, it serves as a nice and quick, but cheap bout of fun and challenge with some chronological ties for hardcore fans. Unfortunately as an arcade release it was very scarce in the West, and for many the only means to play it outside of MAME was through an unlockable in the Anniversary Collection eight years later. 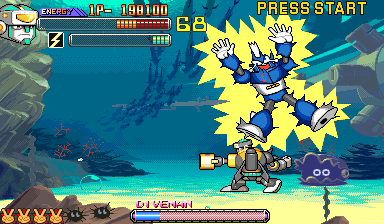 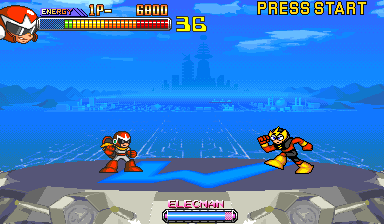 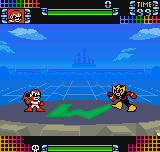