After a decade of absence, it seemed as though the classic Mega Man series had been put to rest, its legacy relegated to cameos as more and more spin-offs with their own sequels were churned out by Capcom. Since at least as early as 2004, Keiji Inafune had expressed his desire to return to the old ways, but for a long time there simply was no space in the market for projects like that. 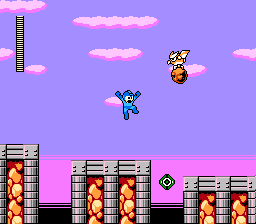 The story falls back on the more tried-and-true plot of robots running amok rather than any extraterrestial influence. This time though, the dangerous bots are constructed by Dr. Light rather than Wily, about which the usually bad man is quick to inform the news, complete with evidence of Light’s involvement and a plea for donated money to help fund production of robots to counter the rebelling bots. Even the police apprehend and cuff Dr. Light during the game’s proceedings. Eventually Mega Man uncovers a memory unit from one of the fallen Robot Masters, with a recording of Dr. Wily personally convincing the eight Light constructs to rise up.

This stubborn big guy uses his Concret Shot to help make blocks to construct dams, but he isn’t afraid to use it to freeze Mega Man in place. He’s also able to shake the ground like Guts Man but throws his own little twist with the occasional lunging elbow. His concept art originally had a somewhat different design, named Cement Man. [Weakness: Laser Trident]

A weather control Robot Master that looks like Harpuia from Mega Man Zeroand was made to keep hurricanes and other fierce storms at bay. He’s able to hover in the sky and fill the screen with powerful lifiting gusts with his Tornado Blows. His original designs were under the name Weather Man and looked more like a satellite. [Weakness: Plug Ball]

The only “female” robot master in the series, though earlier concepts dubbed the planned bot Ocean Man. Before the insurgence, she was a lifeguard/water rescuer mermaid. Now she fights with her armor-piercing Laser Trident and calls forth robo-fish with her singing. She bears a great resemblance to Leviathan from the Mega Man Zero/ZX series. She’s quite popular among Mega Man Robot Masters, if mainly for the distinction of being the only lady of the group. [Weakness: Hornet Chaser]

A gadget geek that shops at electronic stores when he isn’t inspecting and certifying TVs and many other appliances’ energy rates. Though he only has two prongs, his Plug Balls are very grounded, travelling like lightning-fast Search Snakes. Him and Splash Woman are the only two Mega Man 9 Robot Masters designed by Keiji Inafune. His initial design had him called Plasma Man and built like one of those novelty plasma globes. [Weakness: Jewel Satellite]

A diamond cutter / rock polisher and collector of all things shiny. His Jewel Satellite barrier is arguably the best shield weapon in the entire series, able to destroy tons of weak enemies and projectiles without breaking a gem. Originally dubbed Diamond Man, he was explicitly designed to be gaudy and foppish. [Weakness: Black Hole Bomb]

A flower aficionado that’s programmed to pollinate a park with his homing Hornet Chaser bees. These buzzers carry back goodies they come across, which is perfect for out-of-the-way 1ups and more. His honeycomb body was a later edition, originally looking more insectoid with wings and a stinger gun aptly called Sting Man. At an earlier point he was going to be Honey Woman. [Weakness: Magma Bazooka]

A geothermal power plant overseer that’s able to fire off chargable 3-way Magma Bazookas so long as his head flames are ignited. He also loves to hit the spa on his off-times to cool off after wading through molten lava all day. [Weakness: Tornado Blow]

A UFO-shaped bot built to calculate rockets jettisoned into space. His Black Hole Bomb weapon just sucks, but in a good way. His colors constantly shift and he loves to hover around in a sleek compact retracted limb mode. His original moniker during game development was Space Man. [Weakness: Concrete Shot]

A robot impersonating as a police officer to arrest Dr. Light. He is the boss for the DLC Special Stage for those who want some post-game justice. His big revolver gun arm rapid fires six shots before he reloads. No, you can’t win that attack from him after turning him back to scrap. [Weakness: Jewel Satellite] 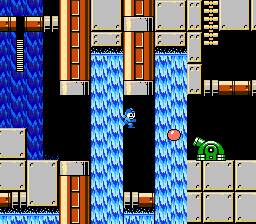 While watching the recorded memory unit after the final Robot Master is destroyed, the ethical issues with scrapping robots is introduced by Wily himself. While not the sort of game to dwell on such a heavy subject, the mad scientist reasons with the Robot Masters that just because they reached their government-issued expiration date, that doesn’t give anyone the right to decommision and dismantle them outright, regardless the robots’ lack of free will. Nevertheless, such incriminating footage would do no good for Wily, so he easily dupes and snatches the chip from Mega Man before flying off to his fortress. 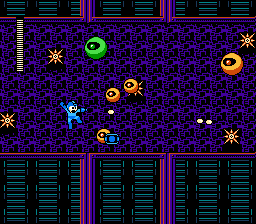 In a novel-for-the-time approach, the 9th main game in the franchise looks and plays like a NES classic lost in time. Everything from the graphics and sound appear ripped from a cart, down to the amount of enemies on screen being limited to match. Players can even opt to play the game with optional simulated sprite flickering and slowdown. The music captures the style of the 2A03 soundchip perfectly, and the score is one of the strongest in the series for a long time, thanks to the trio of composers within Inti Creates. A bit of a cop-out is performed with a few menus and fanfares seemingly ripped wholesale from Mega Man 2, reusing even the same Wily Fortress intermission jingle and “weapon obtained” drum beat. One of the more impressive effects was used for the Endless Mode track, giving the lengthy game mode a rave feel with its fast square wave hits. 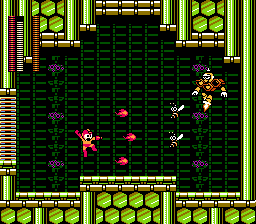 For many players used to gaming in the 21st century, the difficulty is a startling wake-up call as the core mechanics fall back to those of Mega Man 2: no charge buster; no slide; and no fancy means of flight for the first half of the game. Mega Man starts with his trusty stock buster and Rush Coil, only earning the Rush Jet after defeating five Robot Masters. Plenty of spikes, instant death falls and hazards litter the stages, and mid-level checkpoints often have to be earned after felling a mid-boss or two. 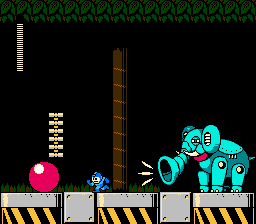 There are many moments where the designers trick new and veteran players with gotcha moments, likely fooling or capturing Mega Man into a doomed situation. One of the more troll-worthy enemies is the Bunby Catcher, a propellered pincher baddie that dive-bombs from off screen in set areas. It doesn’t cause damage but rather holds Mega Man hostage as it swiftly drags him toward most likely a prickly floor or wall. After learning their drop points, it’s not hard to bypass them safely or destroy them before they can grab Mega Man, but it’s as if they’re designed purely to infuriate careless players the first time.

The game does introduce one of the trappings of modern gaming to the series, though, and that’s paid DLC. While the main game offers the entire NES experience (along with current-day online leaderboards for Time Attack mode), buyers would have to nearly double the asking price to unlock the full contents within the data. These added modes include a playable Proto Man (with no shop available), two harder modes with revised stage obstacle and enemy placements (adding more “gotcha!” moments), an Endless Mode where Mega Man hops through assorted random mini-stages – many mirroring memorable moments from the early games in the series – as well as a fight against the Robot Masters that lasts until the player dies, and finally, one Special Stage. 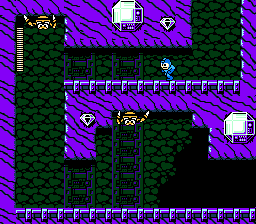 The Special Stage is a very lengthy map filled with every mid-boss and the massive three-screen Fortress shark ship as opponents, and ends with a brand new boss. The price for each of these add-ons range from a dollar for the difficulty modes to $3 for Endless. The problem is that these DLC downloads only unlock content that’s already in the game data. Surely Capcom never learned from their mistakes, as this practice was met with severe backlash in Street Fighter x Tekken. 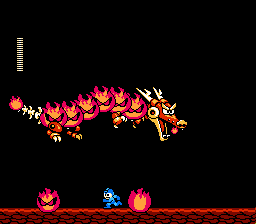 Mega Man 9 was a late turning point for the series, scaling back down to what made the franchise great in the first place. The selection of weapons are arguably the best set in the bunch, each tactical in its own way with many alternate uses like Tornado Blows jump boosting abilities or Hornet Chaser’s item snagging properties. Nothing seems wasted or underused. The download title’s impact ushered in a new way of looking at smaller titles, allowing many retro throwbacks to see the light of day and spurn many 8- and 16-bit styled new games to be developed by indie teams.