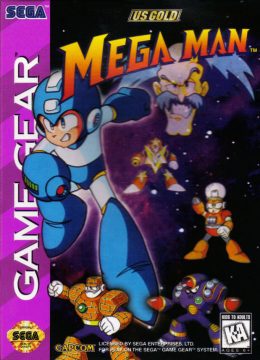 In a somewhat odd turn, U.S. Gold acquired the rights from Capcom to make a Game Gear exclusively Mega Mangame. Developed by a team named Freestyle, this title was released solely in North America, and copies stages directly from Mega Man 4 and 5, with a little bit of 2. Much like the Game Boy series, there are only four Robot Masters at the start: Bright Man, Star Man, Napalm Man and Stone Man. Following their defeat is Dr. Cossack’s Castle from Mega Man 4, but it consists of the Wave Man and Toad Man stages. Once all six bosses are beaten, it’s straight to Wily’s Fortress from the fourth game, made up entirely of Quick Man’s stage without a Robot Master battle and a tiny two-screen stage from Mega Man 5 straight to the mad doctor Capsule fight.

Though the stages are almost exactly lifted from previous games, there are a few odd omissions and design quirks. Eddie doesn’t appear, so energy is simply placed in the rooms in his place. There’s also no Beat, so his collectible icons are missing. The added color depth means a little added shading from the original games, but some enemies’ palette and sprite work are garishly redesigned. Certain enemies in Bright Man’s stage in particular look bloated. Mega Man can only shoot two pellets at once, and many Robot Masters are sped up and fly across the room. Worst of all, the stage layout and graphics are 1:1 with the NES, but the smaller Game Gear resolution means less screen real estate, which leads to extra scrolling, and blind jumps. There are many spikes or pits that cannot be seen coming before the jump. These cheap deaths and lack of any continues makes this game frustrating. The music is also a step down due to the Game Gear’s more limited sound chip tech.

The game falls apart near the end, almost as if it was rushed to completion. Quick Man’s stage has added crystal tiles to the walls and updated beam spritework, but lacks many of the enemies. The last leg is completely barren and Mega Man teleports away once he walks into the pre-boss shutter doors. The final Wily stage is, as stated, super short with only one enemy, followed by the disappearing/reappearing Wily Capsule battle from Mega Man 5 but with no post-battle bowing, only Mega Man leaping as if he’s gaining a weapon. This is right after acquiring Toad Man’s Rain Flush, or “Rain Weapon” as its called here, so it hardly gets any use, and it isn’t Wily’s weakness either. The final screens even show Dr. Cossack’s Castle exploding instead of Wily’s before going straight to the credits, complete with fireworks.

The whole package reeks of amateur effort, ripping off prior games wholesale and reassembling the pieces without care. There’s nothing innovative or new in this port outside of some of the Quick Man stage art. The original titles it lifts from are far superior.