With the mad scientist Dr. Wily presumed dead at the end of Mega Man 3, it seemed as though the world was ready for everlasting peace. However, one year later Dr. Cossack contacts Dr. Light with a big circuit chip on his shoulder, upset that he never recieves the recognition he believes he deserves. The Russian robotic engineer sends out eight of his creations to battle Mega Man and to show the world who is the greatest robot creator once and for all! 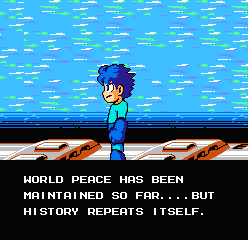 It’s hard to tell how well the reveal after fighting the new doctor was hidden to players’ eyes back during the release, given the absense of any mention in the instruction booklet or on the back of the box. For a brief moment, many players might have believed that Capcom would’ve finally changed the antagonist for good – until Wily teleported in during the post-battle cutscene. At the very least, this game had more of a chance compared to the widespread fan coverage and intel splurge across the internet in modern times, which would’ve found out the surprise days before shipment from an early copy or mere hours after the Japanese version hit storeshelves. Regardless, this game and the next two would follow the same plot formula with a teased new villian and two fortresses to run and gun through as a refined way of keeping the stage count up. 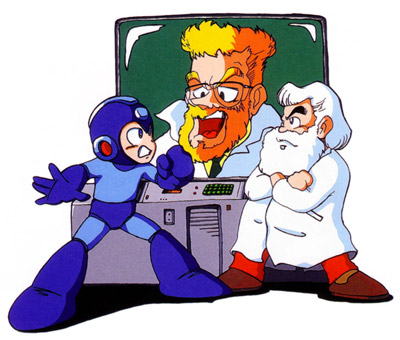 The fourth Mega Man game adds two new elements to the series. The first is a minor perk with the debut of Eddie, who appears occasionally in empty rooms to drop off an item, essentially replacing the Mystery Cans. The second, however, is a major dividing line for gameplay balance: a new Mega Buster that can be charged to power up Mega Man’s shots. The fully-charged blast is longer, wider, and hits three times harder than a normal shot, and can pierce through a row of weaker enemies. Given the fact that the big buster blast costs nothing other than a brief hold of the B button (making Mega Man flash between green and light blue), it can be overpowering, or steal emphasis from many of the Robot Master weapons, especially the buster replacement varieties like Dust Crusher, Drill Bomb, and partially the Ring Boomerang. 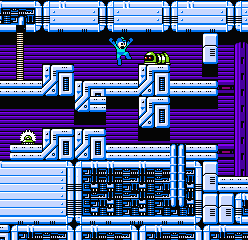 In all actuality, the charged Mega Buster isn’t ever necessary, nor the best option in many situation. There are still plenty of enemies that can be destroyed by one standard shot or have too much HP for one powered blast to take down, and will fall faster with a slew of quickly tapped-out bullets instead. Still, the enemy-piercing powers and size are useful, particularly for the tiny robo bird Coswallowns that is following its mother bot, or the junk block stacks in Dust Man’s stage. The bone-throwing Skeleton Joes also can only be truely defeated with a charged blast, too. In short, the additional firepower isn’t quite a gamebreaker, but also not as radical a gamechanger as the slide was. 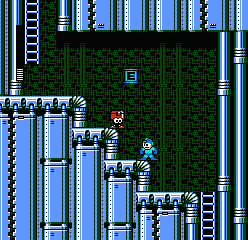 Tiny tweaks have also been made to Rush and his forms. The Rush Jet no longer stays stationary, and keeps flying forward once Mega Man hops on, but it can still be steered up and down. It also doesn’t fly through water, either. These nerfs were necessary to not overshadow his other abilities. The Rush Marine loses its ability to hop out of water, though a bug makes it possible to swim in the air on Dive Man’s adjusting tidal water. Even with an almost entirely water-based stage, the Marine form is still underused, and Mega Man 4 would be the last game to have it available. The Rush Coil still serves just the same, but it has competition with two optional utility powerups in the game: the Wire and Balloon items. The Balloon works almost exactly like Item-1 from Mega Man 2, though it elevates much slower, especially with Mega Man standing on top of it. The Wire works more or less like the Rush Coil, but it can take the Blue Bomber even higher as long as there is a ceiling above to hook onto. The Wire can also damage baddies above if they get in the way.

His original attack from the design contest had him attacking with his long Tongue Cannon. In the game he hops around and does a little dance to summon a storm of acidic Rain Flush, but he can be easily cancelled out of it with a simple buster shot. After figuring out this method, it becomes easy to make this toad croak without taking a single ounce of damage. [Weakness: Drill Bomb]

Would it surprise anyone to learn that this Robot Master was built for boring in construction? His exploding Drill Bombs can blasts through a few walls, similar to the Hard Knuckle & Crash Bombs. He loves diving into the soil underneath to pop up right on Mega Man like a shark, which tends to drag the battle out to a tedious match rather than be any major threat. [Weakness: Dive Missile]

Submitted as Mummy Man, this King Tut bot was built to excavate pyramids since he is able to ward off curses (don’t ask how). He can charge up his fiery Pharaoh Shot and so too can Mega Man once he obtains his weapon, though it floats over the good Rock’s head as a flaming orb once powered up. Supposedly, this powerful ball of fiery death was only intended to defend against tomb robbers. Seems a little excessive… [Weakness: Flash Stopper]

Don’t laugh! This modified police bot flings chakram Ring Boomerangs that are fast and powerful and can reach the length of the entire screen in his hands. He’s one of the harder bosses to fight in the game, even with his weakness. He was designed by one of the few female contest winners. [Weakness: Pharaoh Shot]

A dorky vacuum cleaning Robot Master that’s both laughably easy and annoying as hell to beat. When he’s not upchucking dirty debris chunks known as his weapon Dust Crusher, he sucks Mega Man in with his vacuum head, which also leaves him invulnerable. The best aspect of him is the trivia about his contest winner, Yuusuke Murata. After being a runner-up and getting his name in the credits of Mega Man 3, he got his design in here, and again with Crystal Man in Mega Man 5 a year later, making him the only person to win the design contest twice. Yuusuke later became a manga artist for popular series such as Eyeshield 21. [Weakness: Ring Boomerang]

Submitted with the odd name Diver USSR-U, this submarine-based bot (complete with a periscope on his head) can survive the intense pressure of the deep sea and is able to propel himself like a torpedo at Mega Man, even though he tends to get motion sickness from doing this (not in-game, unfortunately). His Dive Missiles home in on their target, or at least sort of, since the pathfinding programming is a tad wonky and loves to overshoot sometimes. [Weakness: Skull Barrier]

Gotta give this one points for style. He’s able to make spinning energy Skull Barriers to protect himself. They’re not as durable as Leaf Shields, but at least Mega Man can move around while it’s activated. He was supposedly built for combat purposes, but he has an odd AI that lets him stand still and not budge or attack until Mega Man moves horizontally or shoots first. Not exactly a proactive soldier despite having such an intimidating design. [Weakness: Dust Crusher] 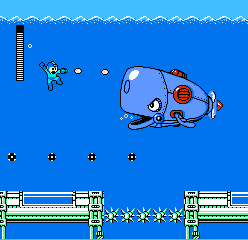 Right from the start, Capcom was adamant on trying to make each new Mega Man game bigger and better. From the new 8-bit “Capcom Presents” logo to the intro cutscene detailing the backstory to the entire franchise (complete with big unique sprites) to the two unique fortresses to plow through with bigger bosses in an attempt to become the most spectacular game in the series yet. The battle with Dr. Cossack’s UFO catcher grabber machine ends with a more complex and longer cutscene revealing the true bad guy, complete with multiple text scrolls for the characters’ lines – a big step above any cutscene the series had seen up to that point. The animated sprites on the Weapon Get screen, spinning Mega Man’s head around and even wagging Rush’s tail, are a nice touch as well. 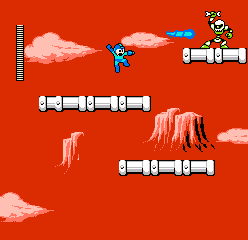 Unfortunately, the grander trappings couldn’t revitalize the stale-growing gameplay as much as the developers hoped for. The greater amount of stage locales were hindered with a darker tonal scheme, barely going bright outside of stark blues, leading to a shadier, gloomier hue and theme, as cold as the twin Siberian castles Mega Man must traverse. The stage gimmicks are either half-hearted or frustrating, from Ring Man’s light rails to Bright Man’s swinging platforms or fighting against Toad Man’s rain or sewer currents. The big mini-bosses in the stage halted the game flow. Many of them take too much damage to take down or are generally difficult to hit, forcing the player waiting for the right moment to strike. Ring Man is especially at fault of this with 2 different mid-bosses to battle throughout the stage. The hippo Kabatoncue rests atop a tall platform that can only be hit by normal shots after knocking down column pieces that regenerate while dodging its homing missiles at the same time; and the nasty stack of rings called Whopper can only be hit when it fires out its huge rings exposing his eye. Even many of the Robot Master battles suffer the same issue, stalling the battle with invulnerable moves or attacks. While the weapons are fairly useful this time, at least three of them serve the same purpose as the Mega Buster, only worth switching to if said weapon is the known weakness to an enemy or boss. 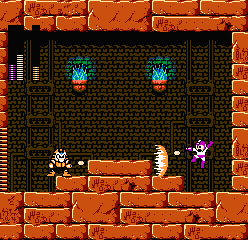 At least the game keeps the tradition of pulse-pounding music going. Minae Fujii takes the reins with Yasuaki Fujita supervising, and while the square wave channels have shifted more to the tweeter side than sub-woofer, there’s some synchopated play to the melodies rather than sticking to a hard-driving beat. As a result, many themes are less likely to stick in your head, particularly such duds as Dust Man’s Stage and the second Wily’s Fortress theme. The Password menu music argurably ranks as the most annoyingly grating four seconds of looped notes the series has ever seen. Thankfully, the weak links are strengthened with some underrated classics, as Dr. Cossack’s Stage 2 track has become somewhat of an underdog fan favorite – sort of the more solemn yin to the Mega Man 2 Wily Stage 1’s yang. Not only that, there’s a unique Final Boss tune, and it’s fittingly intense and pulse-pounding as Wily’s little machine flashes in random positions on the screen, before firing balls of hot death towards the Blue Bomber. Sadly, this would be the last title to be particularly praised for its soundtrack for years to come, as many of the later games’ tracks would fall into ennui for the collective gamer’s mind. 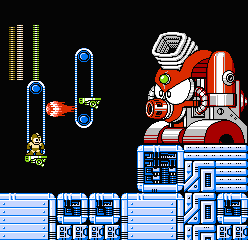 Probably the best metaphor for Mega Man 4 is the last moment Dr. Wily is seen after bowing for forgiveness. The mad doctor arches his eyebrows as he swiftly escapes through a hidden swivel door right next to him, before the fortress self-destructs. It’s obvious that he will be seen again and again much like a punch-clock Saturday morning villian as the series began turning into a safe and by-the-numbers, annually shipped franchise machine. A good formula yes, but still same ol’, same ol’ and losing its novel luster fast.