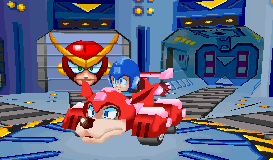 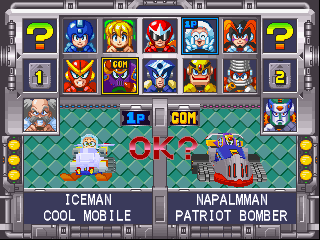 The kart racer genre is a standard go-to game for many a license and popular video game IP. An extreme racing TV show is giving away a 10 million Zenny grand prize to the winner and there’s nearly a dozen robots up to put their metal to the pedal to come out on top. Hopefully a certain mad scientist isn’t dastardly enough to cheat them out of their victory…

These 3 robots assist in the races. Chest describes the courses on the selection menu, Plum interviews the opponent at the start of the race, and Ripot signals the start and hands out the prize at the end of the grand prix. Plum & Ripot also commentate on the race in gameplay. Sadly, most of their onscreen time and all of their audio was axed when the game was released overseas. 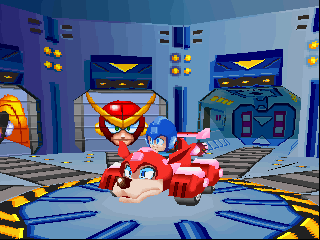 Winning a race in 1st place against each track’s opponent earns you a piece of their ride. Each kart part has their own unique strengths, divided into four interchangable slots: wheels, wing, engine, and body. Each opponent can be challenged again with a harder difficulty to earn another part, with the body chassis exclusively saved for the fourth and final acquisition. There are ten default racers with two more hidden away, and they are a decently well-chosen mix of heroes, villains, and fitting favorite classic robot masters (though why Spring Man of all candidates?). In total there are 11 tracks in the Grand Prix mode with 4 more available in Time Attack and Vs., though they are relatively simpler unfancy bonus courses. The major spin on the genre, other than earning parts from fellow racers, is how items are gained. They aren’t strewn across the track waiting to be picked up, they are only given at random after blasting or running over enough baddies that wander or lie in the way – the bigger they are, the more points they’re worth, like an E-rated Carmageddon. 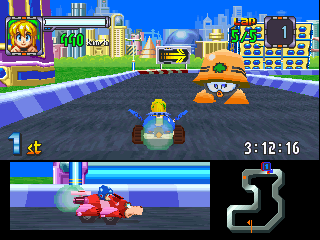 Besting Wily in a race earns an ending for the character chosen. Each ending showcases a unique way the winner celebrate or spends his or her hard-earned cash prize. They’re simple– sometimes rather benign– little artwork stills, but some have a humorous tinge to them, like Spring Man buying too many weights for his body or Guts Man getting booed out for his painfullly sung enka tune on karaoke. There are a few interesting twists on characterizations; Ice Man is portrayed having a crush on Roll as he made an ice scuplture of her and him together in the South Pole, and Quick Man strives to challenge his rival: former champion Turbo Man (why wasn’t HE in this game?). A flawless run as Roll grants the player a special added ending song for her: “Kaze yo Tsutaete” sung by Yoshino Aoki. “Kaze” would become Roll’s theme song in various later games and spin-offs. 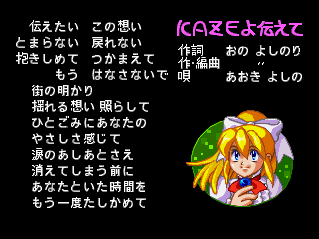 Battle & Chase was ready to be released in the US in April 1997, a month after landing in Japan. It even recieved print ads for the upcoming release in gaming magazines. Unfortunately, Sony of America pulled the plug on the basis that too many mascot kart racers were clogging the marketplace already. Though the height of the genre’s popularity wouldn’t come until a few years down the line, only to bring the largest glut of mediocre licensed sludge, Battle & Chase wouldn’t have done much to break the kart racer cash-in stigma. Mario Kart 64, Diddy Kong Racing, and Crash Team Racing it ain’t. Hell, it’s not even Konami Krazy Racers. 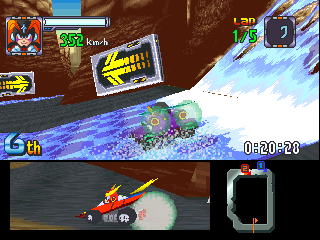 The racetracks are fairly simple and basic with many of them sharing the same boring themes of a city or an offroad dirt rally with only a few stages including any interesting gimmicks like ice, conveyor belts, or switching activating floors. Also, considering the effort to obtain items, they are either overly tilted in your favor, greatly hinder you, or are too difficult to use effectively to be worth the risk of going out of your way to earn them. Considering that the roaming enemies and obstacles are highly likely to turn into exploding mines at any point even if you focus on driving due to the AI obtaining the Bomb Switch item can make the experience as cheap as any blue shell on your tail. 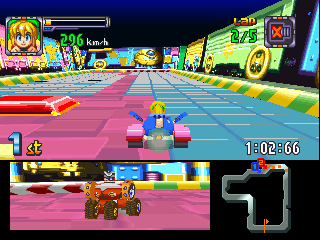 The balance of each racer’s car abilities and special moves is very off-kilter, leaving certain characters’ parts like Guts Man’s or Ice Man’s situational at best, taking out most of the fun of cobbling pieces from other racers together. Worse yet, the difficulty of each course skyrockets after the initial duel with each racer, forcing you to perfect each turn or get lucky to edge out on top in order to receive every part and unlock every track. The fact that you can’t switch out your character in the Grand Prix mode without starting a new save file means you’ll have to race the same bland courses over and over just to see every ending. The two unlockable racers, Dr. Wily and Duo, are equally broken in stats, though Duo is exceedingly hard to obtain. In the original Japanese release, Duo was only given as a save unlock from a CD packaged in an issue of Dengeki PlayStation. Later releases made him unlocked after earning all the secret Black Troop parts. 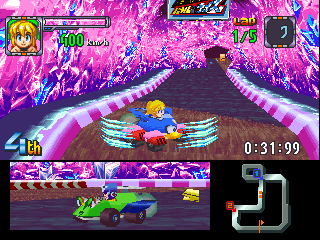 The main difference in the European release from the Japanese one is the removal of almost all context of the new characters Chest, Plum, & Ripot. No effort was put into translatng anything other than the in-game text, which is okay for the occasional line or special move call from the racers but difficult for the extended voice-overs from the sideline crew. Thus, there is no commentary, no pre-race rival interviews, nor any pre-race course descriptions. 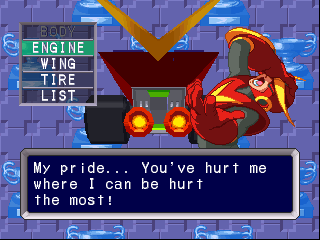 Even though the game wasn’t originally released in North America, it finally made its way to its shores as an unlockable bonus games in the Mega Man X Collection in 2006. This version is based on the Euro edition with no added enhancements other than a slight smoothing of the polygons. The games are technically playable with analog sticks, but steer with digital input nonetheless. The promo video included in the Japanese Mega Man 8 shows an earlier rendition of the game with missing polish like animated head icons and a changed special move for Roll, with her Beat kart having the ability to fly/hover for a brief period. 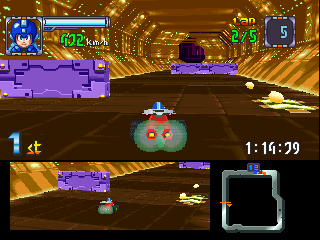