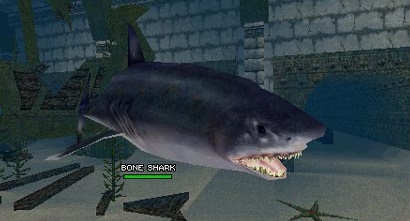 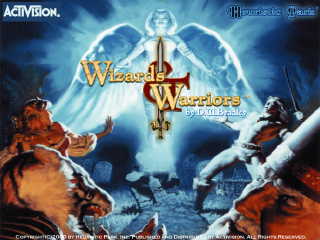 D.W. Bradley may have left behind the Wizardry series after Crusaders of the Dark Savant, but he wasn’t done with the genre yet. In 1997, he returned with his own company Heuristic Park, and introduced his new project labeled Deep Six to be published as Virgin Entertainment’s first big RPG. The game had almost as much trouble getting done as Wizardry 8, though. It took three more years, a name change to Swords & Sorcery: Come Devils, Come Darkness, then a publisher swap to Activision and yet another name change before the game would get done – and even then “done” comes with a caveat.

In many ways, Wizards & Warriors feels like Bradley’s alternative Wizardry 8. As usual, the player creates a party of six, which Bradley-typical may include a variety of anthropomorphs, including rat and even elefant people. There are also some uncanny similarities in the game worlds, like both games include explorable underwater areas with a variety of fishy enemies. In early versions of the game, it also retained the UI that was so typical of Bradley’s Wizardry titles, with three characters represented on either side. Later they were all moved to the right, though, to make room for the character commands on the left. 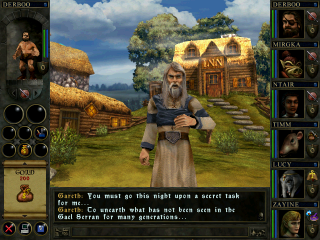 With the early presentations, Heuristic park promised players could switch between real time and turn-based modes at any time, but in the final game both were replaced for a weird hybrid system not entirely unlike Wizardry 8 where everything moves in real time, except when the characters clash directly together with an enemy which causes an automatic switch to the turn-based system. So to a degree it’s possible to rake monsters with projectiles while constantly retreating and never changing into combat mode. On the other hand, enemies with ranged attacks are extremely dangerous if the party doesn’t get close to them fast. Originally the game was also supposed to be geared towards competetive multiplayer, a feature that was eventually removed, but not without leaving its traces within the game design. Characters can join guilds according to their classes, and only the members of a guild receive missions there, which are entered in individual quest books for each character. When there is a global quest that applies to all characters, vital items often have to be picked up six times – once for each character, even though the text description implies that there is only one.

There are also aspects that make Wizards & Warriors seem more old-fashioned than the official continuation of the Wizardry series. Towns are back to being represented in menu form, albeit visualized as 2D panoramas, with 3D character models greeting the party inside of the buildings. The campaign also has a very modular feel like the early Wizardry games, where characters can be imported and exported between different parties.

Gladly, the same sense of nostalgia is also true for the dungeons, which are just as tricky as they used to be, full of puzzles, traps and interesting encounters. Even the very first crypt at the beginning tops almost any dungeon in Wizardry 8 (minus the easter eggs) in terms of complexity and the number of secrets to discover. 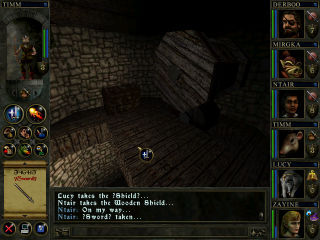 Unfortunately, Wizards & Warriors is one of the hardest games to run properly without major errors on a modern Windows system. Usually it requires activating a bunch of compatibility options, installing two unofficial patches (ironically, the first of them is actually by Heuristic Park, but Activision never supported it with any QA) and recompressing FMVs and even then deal breakers like the game’s failure to properly refresh the screen or missing textures are the norm rather than the exception.

In 2005, Bradley and Heuristic Park created another, more action-oriented RPG called Dungeon Lords, which was maligned by even more bugs and issues as Wizards & Warriors. Seven years later the developer managed to get an improved and expanded version called Dungeon Lords MMXII done, which solved many but not all of the problems. At one point Heuristic Park also worked on a sequel with the title The Orb and the Oracle, but that was cancelled eventually.