The original arcade Bionic Commando had a stellar concept, but the game just wasn’t very good, nor was it particularly popular. Rather than porting it directly to the NES, as had been done with the computer versions, Capcom created an entirely new Bionic Commando for Nintendo’s system, one that took the enterprising arm-swinging concept and reworked into it something much better. 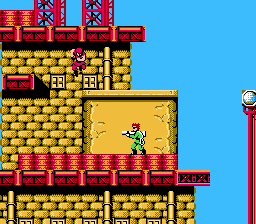 The stage is set sometime around 198X, when the U.S. government learns of a terrifying secret project code named “Albatross”. Originally developed by a long defunct faction named the Badds, it’s newly resurrected by the Imperial Forces, led by its ruler, Generalissimo Killt. The government sends in one of their best men, Super Joe (the hero of the arcade game), to investigate the cause and put a stop to it, but he goes MIA. You take the role of Rad Spencer to rescue Super Joe and foil the Albatross Project.

The first thing that you’ll notice when beginning is the world map, where the areas are broken down into white (Action areas) and red (Neutral Zones). In the main stages, you must guide Rad around the hostile territory and find the communication area, which is marked by bars above the door. You can choose which areas you want to infiltrate first, although there are some limitations on places where you cannot travel until you beat others first. Obviously, you should be starting with Area 1. 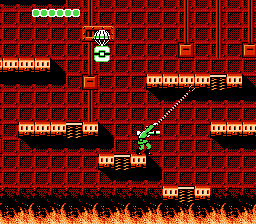 The controls are similar to the arcade game. The B button shoots the gun, and the A button fires out the bionic arm. No jumping allowed here, folks. Why jump, though, when you can just climb and swing everywhere? The stages are designed to make use of the arm with some rather precise timing. There are quite a few points where you’ll have to latch, swing, release, and latch again to another object with damn near split-second timing. Thankfully, the control lag is much improved from the arcade game. The arm is a bit shorter in length, but it extends/retracts much faster, and can be shot again in mid-air.

In order to progress through the stages, you’ll need find the communications rooms. Here, you can radio your base to obtain instructions, and you can also wiretap into the enemy’s frequency and find out what’s going on over at the their headquarters. Home base communication is mandatory in a few areas in order to open up the boss door, but should you wiretap, randomly a loud alarm will suddenly blare out as soldiers rush and attack. 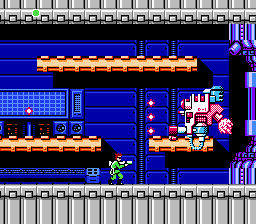 Most levels aren’t too complex, but unlike most action games, many of the levels scroll in all directions, rather than just left and right. It’s hard to get lost though. The main challenge comes from either the difficult “jumps” (or “swings”, rather) to make, which become more difficult with each new area, or the various enemies out to stop you. There are quite a lot of enemies, and at first, Rad can only take one hit before dying, with three lives to back him up. He seems wimpy, but only at first. For every enemy you kill, a bullet drops out. If you collect enough bullets, you gain an additional life bar, allowing you absorb a hit. You can gain several extra life bars over the course of the game.

Your goal in each stage is to infiltrate the reactor core, where each reactor is guarded by a different defense system. Sometimes, it’s a platoon of neverending soldiers that constantly bombard you. Or it could be a bearded mook with a large shield and a bionic arm of his own, which he uses to prevent you from swinging over him. The hardest one to deal with is an uber-large super soldier who has three times the bionic arms you have. However, you do not have to kill all of the enemies, just destroy the core. 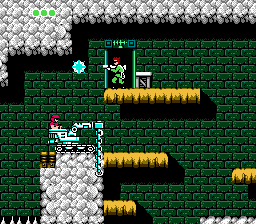 All you have at the beginning is your basic rifle. However, beating certain levels endows you with new weapons and items. There’s the Wide Rifle, which has a short range but can hit enemies above or below Rad, the Rocket Launcher, which fires a super-strong projectile, and the 3-Way, which sends three fireballs out directly forward, above, and below. There’s also Joe’s Machinegun, which fires bullets out at a nice constant spray with repeated taps of the B button.

Before beginning a stage, you go through four menus to choose your weapon, your item, your armor, and your communicator. Items each have their specific purpose, but more than likely, you’ll reach for the medicine, which resurrects all of your life when used. Armor can deflect enemy bullets for a certain amount of hits, but not melee attacks or explosives. And finally, only certain communicators work in certain areas. The Alpha communicator that you start out with functions in the first few areas, but you need other communicator for different areas. Just in case you bring the wrong receiver, though, simultaneously pressing Start and Select returns you to the map screen.

The Neutral Zones are certainly one of the more peculiar bits. Ally and enemy soldiers hang out around these areas to take a break from fighting or heal their wounds. You may be surprised to see an enemy accost you when you first step in to a certain Neutral Zone, but instead of attacking, he instead imparts some threatening words: “Get the heck out of here, you nerd!” Aside from some amusing lines of script, the true purpose of the Neutral Zones is to receive information about what to do, where to go, and what items to bring. However, if you want to cause trouble, just fire a single shot. Watch as everybody disappears, only to have the background flash wildly as white guards jump in to severely penalize you for stirring up trouble in the peaceful area. 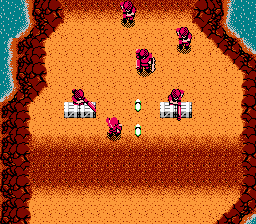 The map screen is also filled with green trucks. If you collide with one, you’re tossed into a brief level in a overhead perspective reminiscent of Capcom’s Commando. These action scenes are straightforward, as you just run forward, shoot, and twirl your arm to deflect bullets. Plus, they’re the only way that you can obtain precious extra continues. There are also a couple of hidden tunnels that become open after receiving information on where they are.

For an action title, Bionic Commando is on the long side (taking a bit over an hour to beat on average), and there is no password feature, but the game isn’t overly hard once you’ve got the controls down. Plus you can run into as many enemies you want to on the map and collect all the continues you need. 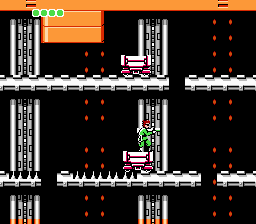 The graphics are damn good. Detailed character portraits pop up when somebody speaks, and Rad himself looks infinitely more badass than Super Joe did in the arcade. And the scenery itself, while mostly static, is vibrant with color and picturesque. From craggy mountain cliffs to a tower beneath a crimson sky, no two levels look the same, except the Neutral Zones.

The music, composed by Junko Tamiya, is top-notch. A couple of tunes (specifically, the ones that play in Areas 1 and 8) are taken from the arcade version, and manage to sound better on the NES sound chip. Everything else is original, and very fitting for whatever area you traverse. If there’s only one setback, it’s that there isn’t much variety and BGMs are reused in two, sometimes even three stages. The sound effects are neat, though anything sounds neat compared to the arcade version. And you just gotta love the metallic clank of the bionic arm as it grips cold steel. 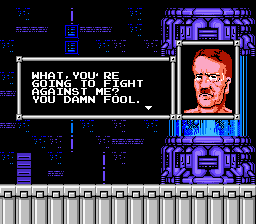 Bionic Commando is remembered fondly for many reasons, the most infamous being the storyline. It’s pretty clear that the Badds were not named that in Japan, but were actually the Nazis. And yes, where the Albatross stands as the symbol of the Badds in the Western versions, the Swastika is instead prevalent in the Japanese version. With Nintendo’s strict censorship laws in the late 80’s, it’s easy to see why they wouldn’t be called Nazis, yet ironically enough, this game displays one of the most graphic examples of unreserved violence ever caught on 8-bit.

First off, Imperial commander Generalissimo Killt is attempting to resurrect an enigmatic figure titled “Master-D.” You’ll face off against Master-D very late in the game, and when his character portrait appears, it becomes blatantly obvious that Master-D is Adolf Hitler. The game is called Top Secret: Hitler no Fukkatsu (“Hitler’s Resurrection”) in Japan – it certainly wears its controversial plot on its sleeves. Hilariously, Capcom redid some of the arcade artwork by giving Hitler glasses, a hat and scribbling on a beard, turning him into…Not Hitler, apparently. And what he says to you was highly shocking for 1989 – “What, you’re going to fight against me? You damn fool.” A swear word in an NES game! Unheard of back then, and you can imagine the shock of gamers who have come this far, only to be insulted by Hitler! After you’ve scrapped the Albatross, you get only one shot to obliterate Hitler’s getaway chopper. Doing so brings up his character portrait, which then explodes in a really disturbing and gory mess. The flying eyeball is a nice touch. One can only wonder how the hell this sneaked under the radar of censorship. 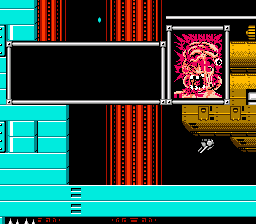 After killing Hitler (again), you need to escape from the base within a short time limit. Here the game dishes out another classic bit of Engrish, informing you that the “base will explod in 60 seconds”. It’s a high paced cap to a fantastic game. 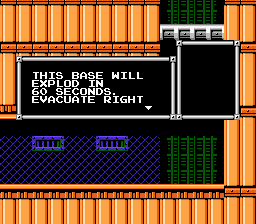 Bionic Commando has it all – unique action, substantial adventure, amusing dialogue, and a big fat exploding head to top it all off. The arcade game had some good concepts that weren’t quite executed gracefully, but it’s great that Capcom gave it a second chance and made one of the greatest NES games of all time. 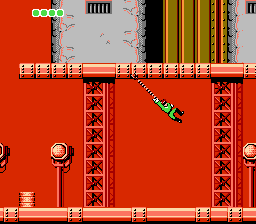 Other than the removal of the Nazi references, there are a few other minor changes between the NES and Famicom versions. Some of the items and enemies have been moved around certain levels, making various instances easier or harder. Other than that, it’s just some name changes – Generalissimo Kilt is named “Wiseman” in Japan, and Hal, the guy who helps you get some weapons, is known as “Schwarzenegger”.

Other than the initial NES release, Bionic Commando also showed up on the Capcom Classics Mini-Mix compilation for the Game Boy Advance, along with Mighty Final Fight and Strider. The resolution has been squashed, but otherwise it’s a decent port. It would’ve been nice to have some kind of save capability though.

The game was also followed up by a complete remake, Bionic Commando Rearmed, released in 2008. 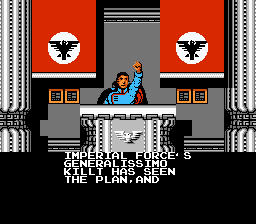 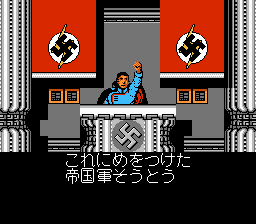