There have been a great many debates that have sprung up throughout the history of gaming. Take, for example, the ever-raging console wars, or perhaps which Final Fantasy is truly superior. The debate between which 16-bit version of Disney’s animated film Aladdin might not reach the heights of those other arguments, but make no mistake, they do exist. Certainly, both versions have their own merits, as it can’t be denied how gorgeous the Genesis version looks, even to this day. While Capcom’s attempt might not be their best work, even for the SNES, it’s a fine game that’s more than enjoyable on its own merits. It also makes a nice historical footnote for being one of the first games now legendary game designer Shinji Mikami worked on. 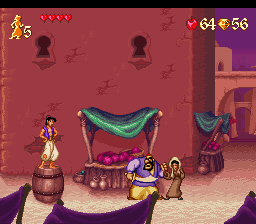 The game follows a rather abridged version of the film’s events, with some creative liberties. All the major beats are there – the initial escape from the guards in Agrabah, the Cave of Wonders, and the carpet ride with Princess Jasmine. There’s also a couple of game-exclusive levels to pad out the game’s rather short length, like the wacky dreamland interior of the Genie’s lamp. The most obvious change is the penultimate stage, in which Aladdin has to venture through an Egyptian pyramid to find his monkey companion, Abu. Between stages, there are also cutscenes with unique art, which serve as a basic recap of the film’s plot.

While both the SNES and Genesis versions of the game are side-scrolling platformers, the two games couldn’t be any more different beyond that. Instead of a sword, Aladdin jumps on top of enemies to dispatch them, which you’ll occasionally use to get to higher areas. You’ll also be constantly picking up apples, which the game gives out so often that you’ll likely be maxed out of them by the end of the first stage. These will only kill small enemies while briefly stunning larger ones, so while they’re useful for taking out enemies that are in an awkward path, they’re generally only useful in a handful of other situations. Early on, you’ll also encounter a non-magical rug you can use to glide short distances. You can also choose to avoid picking it up every time you encounter it, which makes for a fun extra challenge. 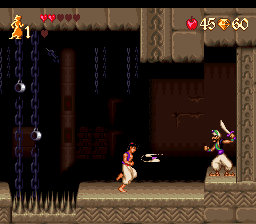 One particular feature that really sets this version apart are the variety of acrobatic moves and stunts that Aladdin can perform. He can catch ledges to help make tricky jumps, which makes the platforming vastly easier. He can also swings on certain objects like poles and stalactites, using them to kick any enemies that get too close. There’s a few certain points where you’ll do all these moves in one continuous flow, and when you’re able to pull it off, it always feels satisfying. It definitely helps add some spice to the platforming, and it’s far more accurate to the stunts Aladdin does throughout the movie.

While the level design is usually fairly linear, there’s enough secrets and collectibles to find to make moving off the main path worthwhile. Besides heart container and extra lives, you’ll also find a multitude of red and green gems throughout the level. A hundred gems of either color will grant you an extra hint, while finding all the red ones scattered throughout the game gives you a different credit sequence. The sequence itself isn’t really worth the effort, which means it’s best to go for the red ones for the challenge alone. A lot of them are placed just deviously enough, often just above a bottomless pit, that it helps add a modest amount of playtime to a rather short game. 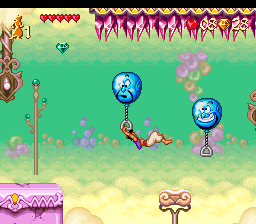 It might clock in at a little less than an hour, even if you’re going for all the red gems, but the game at least stays interesting while it lasts. The platforming stays solid throughout, typically testing how good you are at keeping a chain of bounces going. Later levels add new foibles like moving platform you have to repeatedly bounce off of, Genie balloons that have to be traversed across before they pop, and wheels that have to be turned to get a platform moving on the right path. It only starts to get difficult near the end of the game, where you’ll often have to deal with long stretches suspended over the void, but the stages are short enough and checkpoints so frequent that the challenge stays mild. Even if you can’t make it on three continues or more, the password system will let you jump all the way to the final boss.

(It might not come off as much of a surprise that a Disney game isn’t very hard, but after how brutal The Lion King could get, that’s something one shouldn’t take for granted.)

There’s just enough breaks in the platforming to keep from getting too stale, like a couple of auto-scrolling levels featuring the magic carpet. One of them is one of the toughest challenges in the game, forcing you to navigate a tight tunnel, all while avoiding the instant-death boulders and the wave of lava that constantly reaches towards you. The other is a romantic carpet ride with Jasmine, serving as a relaxing bonus stage and a nice breather between a couple of especially tricky stages. There’s also a handful of boss fights, with the final battle with Jafar’s snake form being interesting for featuring a Genesis-style segmented sprite. It’s a rarely seen effect, but between the fire in the foreground, the projectiles Jafar spits, and the snake’s constantly shifting body, it slows the poor SNES down to a crawl. 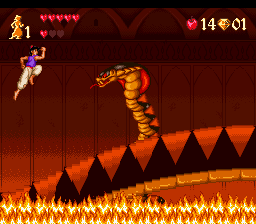 When it comes to the graphics, the SNES version absolutely pales in comparison to the visual spectacle of the Genesis version. That’s not for lack of trying, however, as the sprite graphics carry their own charm. There’s some nice touches like having the guards laugh if they manage to hit you, and you’ll periodically see Abu getting up to various antics if you keep a close eye on him. The sprites might not be as large or as fluid, but that carries the silver lining that the controls are tight and the hitboxes always work as expected. The soundtrack only carries a couple of tracks from the film, and while the original compositions are decent, they feel a little bland compared to what was borrowed from the movie. A lot of them sound suspiciously similar in instrumentation to Super Ghouls N’ Ghosts, as well.

It was always going to be an uphill battle for the SNES version to ever compete with the Genesis version, and gaming history has concluded it was the latter that won. It’s not an entirely unfair judgement to make, truth be told. While the SNES version is a solid platformer, it lacks the sheer amount of effort and spectacle the Sega version had to offer. The question of what the truly superior version was may never be answered, but it’s a question that’s far less one-sided than the internet at large seems to think. 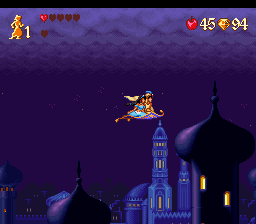 The game was ported to the Game Boy Advance in 2003 to coincide with the movie’s DVD release. Aside from a smaller screen, this port looks and plays almost identically to the SNES version, with tweaks to the color palette and some added slowdown. The password system has been replaced with a battery save, which now also tracks your lives, gems, and hit points. All the tracks used from the movie have also been replaced with original compositions, including the bonus stage theme that used a riff from “A Friend Like Me”.

There are also four versions of Aladdin for the NES/Famicom, three of them developed by Chinese pirate teams, and one of them legitimate. Three of them are based on the Genesis game (including that one legal one), while the fourth, developed by Hummer Team, is based on the SNES game. As far as pirate games go, it’s actually pretty good. The graphics have been well converted, it has all of the levels, and even includes the password system. Only minor things are removed, like Apu following you around, or the Mode 7 in the bonus rounds. However, sound is completely different, and not terribly good. But the biggest issue is the strange physics  – Aladdin walks MUCH faster than in the SNES version, making him harder to control. There’s also a significant amount of flicker in some areas. Still, not as bad as some of the other versions. There’s also an alternative version called Popeye II: Travels in Persia, which is 99.5% identical, except for swapping Aladdin’s head with (you guessed it) Popeye the sailor man. 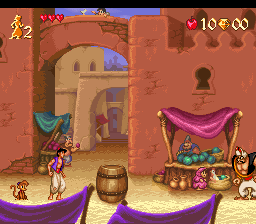 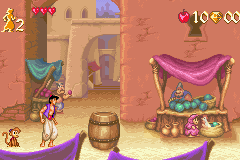 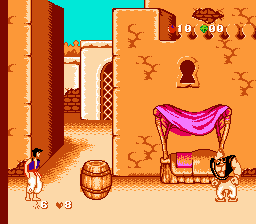 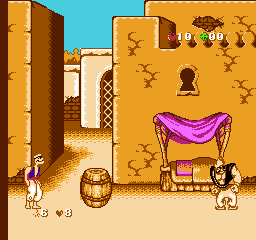