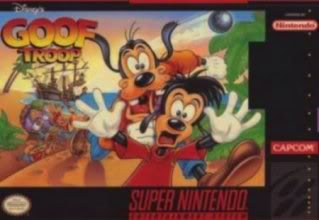 Although there hasn’t been a new Higemaru game since 1987, Capcom didn’t completely forget about it. In 1993, they produced and released an SNES adaptation of the Disney animated series Goof Troop. In this game, one or two players, can play as either Goofy, or his son Max, or simultaneously. During a fishing trip, P.J. and Pete, Goofy and Max’s friends, were kidnapped by a Pirate ship, and Pete has been mistaken for a Pirate leader. The game has you go through five levels, all while solving puzzles, each one harder than the last, and some of the gameplay elements are reminiscent of Higemaru, like how you throw barrels and other objects at your enemies, and that the gameplay is done from an overhead perspective; the final level even takes place on a Pirate ship (much like the Pirate ship portions of Higemaru Makaijima, and all the levels of its predecessor.)

It’s because of these elements that Goof Troop can be thought of as a spiritual successor to Higemaru Makaijima. Goof Troop features ocean levels (similar to Mermaid Island), forest levels (similar to Cuck Island), a castle level (similar to Hebi Island, but without the characters from Ghosts ‘n Goblins), and a cave level (much less creepier than Dokuro Island). However, there are completely different items that you can collect use, such as a bell to distract enemies, a rope gun to help you cross over gaps, and keys to unlock doors. Unlike in Higemaru Makaijima, the items you collect are not permanent. You can only carry up to two items at a time, so be sure to use and discard wisely. You also get a limited amount of continues, as opposed to Higemaru Makaijima, where you don’t get any. Goof Troop was designed by Shinji Mikami, who later went on to create the Resident Evil series three years later. Goof Troop is worth picking up, especially considering that Capcom usually made high-quality games based on popular Disney licenses, and this one is no exception.