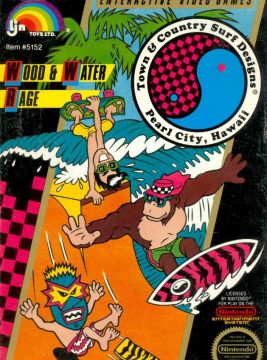 LJN is notorious for publishing many stinkers on the NES based off of licensed properties. Interestingly, they weren’t all based off of movies or comics. Town & Country Surf Designs: Wood & Water Rage is actually based of a chain of stores that sell and manufacture surfboards and surf apparel, founded in Pearl City, Hawaii. Many of their designs were born from an artist named Steve Nazar, creating such gnarly characters like the pompadour shades-wearing Joe Cool (no, not Snoopy’s hip persona), Tiki Man, the tuxedo-sporting Kool Kat, and cap-wearing Thrilla Gorilla. Obviously with the big surfing and skateboarding craze of the late 1980s, this sort of game was bound to fly off the shelves, regardless of the lesser-known name brand.

In the style of Skate or Die!, California Games, and many of its ilk, T&C Surf Designs sports wildly different game modes based on extreme sports. Unlike them, there’s really only two available, with a third mode alternating between them. The game is very limited in scope, meant only to be played for the top score (which it doesn’t save) until you reach game over from losing all your lives or running out of time. Thankfully, the clock stops when you have a full life bar of 8 yin-yang tokens, but you lose 1 to 3 lives at a time depending on what obstacle you hit and how you hit it. Aside from the white noise title screen and menu music simulating waves crashing on the beach, there’s only one song that plays throughout the entire game (it sorta resembles the main riffs of At Doom’s Gate from Doom), and a few jingles for completing a round or wiping out. There is a 2-player option, but it’s alternating, so no co-op whatsoever. 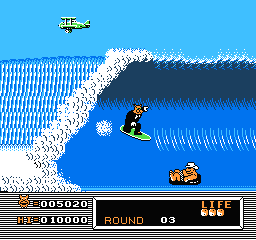 The skateboarding segment stars Joe Cool and Tiki Man and contains only one course, which starts a little farther back at the beginning of each new round up until its full length at Round 6, where it just loops endlessly afterwards. The road is littered with oil drums and boxes strewn about and huge potholes to leap or ramp across. Outside of a few buildings, there’s nothing else to look at or to stand out. There’s not even any other people around in this ghost-town, yet somehow frisbees, baseballs, volleyballs, R/C cars, drums, and even turtles bounce or roll by from the right side of the screen to launch you off your board and skid you bellyfirst onto the pavement. The color palette differs depending on which character you select, and this is the only mode where this happens.

You can perform various tricks for bonus points, but the majority of them put you in immediate danger so it’s too risky to attempt. Even jumping without holding left to hang onto your skateboard is a death sentence for anything but crossing gates for the measly 500 points. The best trick to pull off is to hop and ride on the white fence in the back for a few seconds to bypass many of the obstacles and hope there isn’t a hole or oncoming hazard once you jump back down. There are various coins sprinkled randomly on the street, sometimes even appearing inside of oil drums where you can’t reach them. If you’re lucky, you can jump on top of a hazard like the R/C car and defeat it for big points, but the hit detection’s so strict you’re likely to crash attempting it. 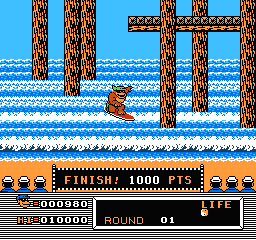 As painfully dull as the skateboarding game is, the surfing sections are brutal to stomach through. Your tuxedo-wearing cat or gorilla avatar is constantly pulled down toward the bottom of the screen, which counts as a loss of life if you sink past it. Preventing a swift undercurrent death means wrestling with the d-pad in order to stay above, with almost every other direction but up and right leading to a wipeout from the motionless crashing wave behind you. Your only hopes for survival are surfing off the crest of the wave or reaching the pier far off toward the right to advance to the next round, and each method is wrought with peril. The wonky controls go as follows: pressing up sends you up and left, toward the wave of instant wipeout. Meanwhile holding right creeps you towards the right side, away from the wave, but also down, with your only hope being to reach the pier before you’re sucked down. If that weren’t enough, you also have to contend with divebombing seagulls, leaping fish, and smug-looking innertube riders that’ll knock you off your board. Aside from hopping off the crest and reaching the pier, the only other ways to score points are from picking up bobbing bananas in the water (mmm, salty, soggy nanners…) and riding just inside the wave, which you’ll do anyway, just trying in vain to survive a few seconds longer before the vacuum of the bottom abyss of the screen overtakes you. There’s no time limit in this mode, but good luck lasting any longer than you would during a round of skateboarding.

As lousy as this game was, it apparently sold well enough to warrant a sequel called Town & Country Surf Designs II: Thrilla’s Surfari in 1992. As the name suggests, you only play as the gorilla, but the majority of the game is played riding a skateboard and not surfing.