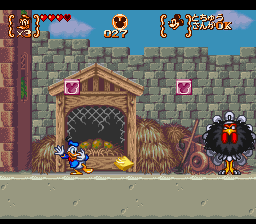 Next to Sega, the company who had the biggest success with licensed Disney video games were Capcom. Whereas Sega pitted the famous characters in starring roles in their all original grand adventure, Capcom mostly developed games based on the Saturday morning series that were airing at the time and had great success staying close to the source. Once the SNES came around, Capcom took a page out of Sega’s book and developed an all original game titled Disney’s Magical Quest Starring Mickey Mouse. The game was a smashing success both critically and commercially with its unique costume changing feature which allowed Mickey to don various magical costumes, all which gave him different powers to get through the levels. Two sequels were eventually made and the second game, The Great Circus Mystery Starring Mickey & Minnie, introduced a 2 player co-op mode with Minnie Mouse stepping into the action. The third game almost suffered the same fate as Mahou No Boushi and went unreleased in the West until 2003, when Capcom ported the entire Magical Quest series to the Game Boy Advance. This game was Magical Quest 3 Starring Mickey and Donald, released as Mickey to Donald: Magical Adventure 3 in Japan during the Christmas season of 1995.

The Magical Quest series do not take place in any strict continuity or each game are individual stories which are told very similar to one another. Huey, Dewey, and Louie discover an old book in Donald’s messy attic while hiding from their ill tempered uncle. Upon opening the book and reading a few lines from it, it turns out that the book is magical and transports the three ducklings into Storybook Land and captured by the evil Baron Pete. Pete has long planned to take over the Outside World in which Donald and Mickey inhabits and when the book was opened, that plan was set in motion. Once the duo notices the boys are gone, they are told what is going on by the Fairy of Storybook Land (who seems to be based on Cinderella rather than Tinkerbell) and with her assistance heads into Storybook Land to rescue them and to stop Baron Pete’s plans.

It follows the structure set before it by the two previous Magical Quest games by throwing Mickey and Donald into a vast fantasy land which is filled with dangers and secrets. Storybook Land is heavily based on fairytales, using everything from medieval castle courtyards to Arabian deserts and costumes which feel appropriate within the settings. Both characters have the same set of default controls, being able to either jump on top of the enemies or pick up blocks and throw them across screen, as well as stunned enemies and other objects. The way they are set apart is with the magical costumes which are different between the two. For example, Mickey will get a full knight armor with a lance and shield which he can use to protect himself, while Donald gets wooden barrel because his rear end is too big for the armor and a hammer. The way each suit works is very different from one another, except the tree climber suit which are the same for both of them. Mickey’s costumes allows for him to attack in all directions, while Donald will always just attack straight ahead.

The different features in the costumes is often the key for both players to make it through the level in one piece. Because of his metal armor, Mickey will sink like a rock if he enters water, but Donald can duck and do a barrel roll, which not only works as a great defensive maneuver, but also enables Donald to be used as a flotation advice. Mickey and Donald can also throw each other around to access secret areas filled with either coins, apples, hearts or secret doors leading to shops or bonus games. This allows for some good co-op moments where players really need to work together for both to evenly get ahold of treasures and health. In single player mode, many of these areas are completely unreachable. During single player, a second player can join in at any time by pressing start.

The bonus games are played by finding the secret doors which leads to them. These bonus games are a game of chance where you are asked to pick one of three cards with whatever on the card being the price. If the card turns out to be a Pete card, there is no prize to be had however. The shops allows for costume and health upgrades, as well as 1-ups. A health refill is on the house. On the stages you can find coins and apples behind almost every block and inside string boxes with gold engraved faces on them. Apples gives high amounts of points which can lead to extra lives. 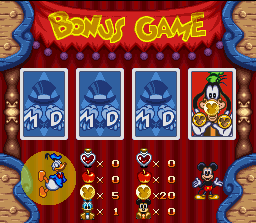 Everything looks very similar to the previous Magical Quest games, with some truly gorgeous graphics and great animation on both the heroes and villains, and everyone sporting great expressions and mannerisms that bring them to life. It doesn’t look quite as good as Mahou No Boushi did and they both deal with a lot of the same characters and environments. Donald especially looks a bit off at times in this game, especially in his costumes. The main problem with his looks is that his beak is sometimes too short and he just smiles way too much, despite his nephews being in danger and kidnapped. The soundtrack is quite good too, though doesn’t quite live up to the first Magical Quest music. The music was composed by Mega Man 5‘s Mari Yamaguchi and Mega Man 7‘s Tatsuya Nishimura. 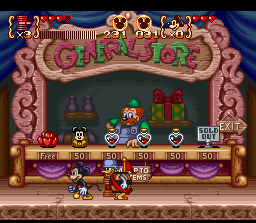 Even though the game is the closest you will get to World Of Illusion on the Super Famicom, it doesn’t feel as cooperative to play even with the premise being fairly similar. For one, the routes of each stage remains the same, while World of Illusion cleverly sent both characters on either separate quests or a special quest together depending on your choice. The controls aren’t as responsive as they could have been either, and vary a lot in functionality between all the suits. It’s certainly not a bad game by any stretch, and should have arguably been released back in the day to allow fans to finish the Magical Quest trilogy on the same console rather than waiting nearly 10 years before doing so. For those who would start out playing this game before the others, it would probably be a very positive experience but for everyone else who played the predecessors, it doesn’t feel too different and lacks a certain feel of progress. The humor is really good though, with Donald always ending up with the short end of the stick with some great reactions.

Even though the game could be enjoyed and even understood without the ability to read Japanese, it was fan translated by translation group RPGONE in 2004 that could be played through SNES emulation. In Japan, the GBA port was released in 2004 as well, and one year later, this was localized and brought over officially by Capcom marking the first time the game was officially released outside of Japan. The GBA version features a link up mode which allows two players to enjoy the co-op mode should they both own the game and have the cable. There are no other changes other than the smaller resolution and shorter view, though the music is butchered by the GBA sound capabilities.