Capcom felt fit to give a SNES-only sequel to Final Fight, especially given that their home port of the original was less than adequate. Final Fight 2 not only reinstates the two player game but also gives you three characters to choose from – oddly, Guy is not one of them, in spite of the story revolving around his fiancee and her father getting kidnapped by the remainders of Mad Gear this time. Only Haggar returns from the original; new are Maki, a sexy modern ninja girl similar to SNK’s Mai Shiranui; and Carlos, who carries around a sword but never actually uses it, except during special attacks. Maki and Carlos look cool, but they don’t play much different than Guy and Cody, respectively. 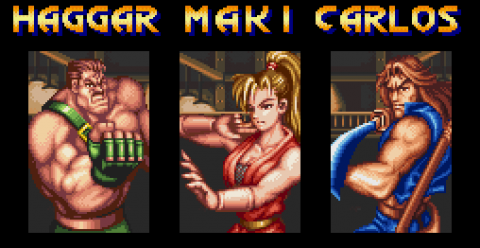 Otherwise the game is pretty much the same deal as the original, the most obvious difference being that you now visit different locations throughout the world, including Hong Kong, France, England, Holland, Japan and Italy. This was an idea probably inspired by Street Fighter II. (You can even find Chun Li munching in noodles in the background of Hong Kong.) 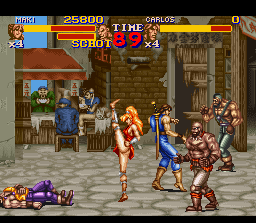 And you get differently designed enemies to beat up, but their movement patterns make it all too obvious whom from the first game they replace. The only major villains who make a comeback in name and appearance are Andore and Rolento (although the latter loses the final “o”). The new bosses this time actually don’t have much in terms of “boss qualities” to them – they chiefly feel just like strong ordinary enemies with grossly inflated health bars, no special tactics or interesting weapons. On the other hand that also makes them less unfair than their predecessors from the first game.

The most “exciting” change to the game engine are some sections where stages scroll vertically. Weapons are also still there, but for some reason have become surprisingly rare. All this featuring the same stiff-yet-tight game mechanics. Even the bonus rounds are essentially the same, only replacing the window panes with burning barrels. Still fun, but in comparison to Sega’s rip off series Streets of Rage (which was coming out around the same time), it feels a bit thin. Ultimately, it’s more of an apology game for the SNES port of the original game being so cut back. 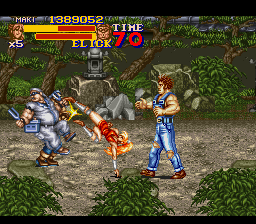