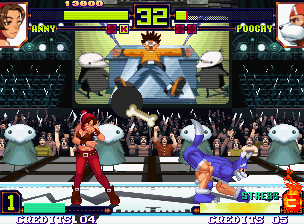 Prior to Matrimelee, Noise Factory created the underrated Rage of the Dragons. If you’ve played that game, you’ll feel very much at home with Matrimelee, because it controls practically the same way. Although purists tend to regard it as too fast and flashy, it’s one of the quickest and tightest fighting game engines out there, and a huge improvement over all the previous games. All of the graphics have been redrawn to fit the new style, and while many characters have remained the same, a few (such as Chris and Annie) have been given complete overhauls to look less dorky. Noise Factory even borrowed a few characters from Rage of the Dragons, including Billy, Jimmy, Elias, Mr. Jones, and Lynn. 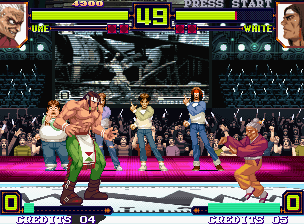 It’s evident that the designers loved Power Instinct 2, because it draws a lot of inspiration from it. All of the tag team functions have been ditched totally. The sound effect when you select a character is a clown horn. Defeated characters show up with doodles on their face. And there’s a whole new selection of silly vocal songs, all of which sound incredible coming through the Neo Geo synth. The music was composed by Toshikazu Tanaka, who also did the soundtracks for Metal Slug 5, King of Fighters: Maximum Impact and (obviously) Rage of the Dragons, who’s proven to be one of the best musicians on the fighting game scene. Unfortunately, if you’re playing on an American system without a debug BIOS, you won’t get any of the vocal music. The only real new addition to the gameplay is the ability to pick up a kuroko in the background and toss him at your foe.

One of the only noticeable flaws in Matrimelee is lack of backgrounds – there are only a small handful stages, although many of them have several variations. It also suffers from the usual SNK-boss syndrome. The last boss is a tiny little girl named Sissy (who has a box that can summon gigantic monsters and has sawblades on her shoes) is annoyingly difficult, even on the lowest difficulty setting. Otherwise, Matrimelee is definitely the crowning achievement of the series, and one of the last great titles on the Neo Geo. 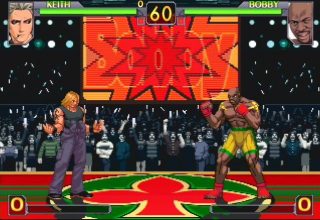 Over two years after the original Neo Geo version, Matrimelee was ported to the PlayStation 2 by Excite (yes, the same company that’s a web portal) under the title Shin Goketsuji Ichozoku: Bonnou Kaihou. Technically, the game is meant to be a sequel (note that the title Matrimelee doesn’t appear at all in this version), since there are all new endings and some minor changes to the gameplay. The kuroko judges have been removed entirely, as well as all of the Rage of the Dragons characters and their associated music and stages. Kinta and Angela from Power Instinct 2have been included into the roster, and the transformations have been added, although this means that Poochie is no longer a regularly selectable character. Real life Nigerian boxer-turned-comedian Bobby Ologun also replaces Sissy as the last boss, and his over-the-top attacks make remarkable sense in a game as goofy as this. There’s also a mission mode which lets you get new cards, which can unlock extra characters and modes, as well as give minor benefits during fights. The character artwork is all high-res, although much of the fancy presentation effects in between matches have been replaced with static screens, which is pretty dull. Although some of the changes aren’t necessarily for the better, it’s nice to see it getting an official port.