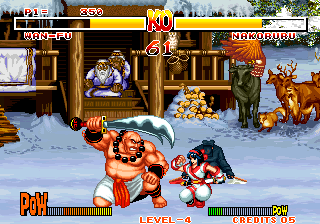 Samurai Shodown utilizes a four-button input control scheme – one button is for weak slashes, which are quick but causes minimal damage, and a second for medium slashes, which are more powerful, but somewhat slower. Combining the two buttons simultaneously results in a powerful, single strike that deprives the enemy of a rather large amount of their life and cab end the battle rather quickly, just like real life. If a match is ended with a fierce slash, it may potentially strike an artery, causing a fountain of blood, or cut the opponent right in half, causing them to explode in a mess of bonus coins. The remaining duos of buttons are used for kicks, weak and strong. Kicks can be combined into a single input to make a powerful kick, like the slash attacks, and are often utilized to take an enemy off guard or make an opening in defense. You can run by double tapping forward, and leap backward by double tapping back. This pacing is really what makes Samurai Shodown unique. 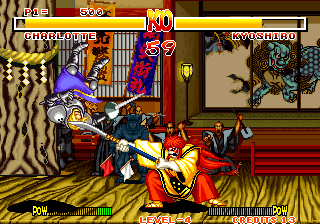 The game is not easy. SNK is pretty much infamous for its difficult CPU opponents and Samurai Shodown is a perfect representation of this. The computer never lets up on you, even on the lower difficulty levels. It also learns your patterns if you take to repeating battle maneuvers, so staying unpredictable is an absolute must.

There aren’t really any super moves in the first Samurai Shodown, Rather, as you take and receive damage, the POW meter at the bottom of the screen fills up, and your character slowly turns bright red. When the POW hits max, their attacks are more powerful. Occasionally, the combatants end up locking weapons, and only by mashing buttons can you escape. If you manage to completely overpower your foe, they temporarily lose their weapon and need to retrieve it. It’s even possible to destroy a weapon this way. But even if you’re unarmed, you can catch your opponent’s sword with your hands and toss them backwards. 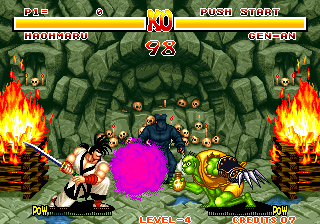 The only major difference between the Japanese and World versions on the Neo Geo is the missing voiced narration in the intro. Samurai Shodown was ported to various consoles following its success in the arcades. Most of the home ports were handled by Takara, who often worked with SNK on console conversions. The Genesis and SNES releases of Samurai Shodown both take many shortcuts and liberties with the source material to make the transition. Naturally, all of the scaling effects are gone. But otherwise, the most obvious alterations are with the graphics.

The Genesis version has smaller, less colorful sprites than the arcade version, though things move as quickly as they do in the arcade and the majority of move animations are intact. The Genesis has less on-screen colors overall, but uses a brighter selection that fits the style of the original game equally well. Many of the characters’ animations have been removed or changed drastically, resulting in different moves. For instance, Haohmaru’s fierce slash has been changed into the same animation for his hurricane attack projectile. If you’re using a three button control pad, you’re stuck with an awkward control scheme where the three slashes are mapped to A, B, and C, while kicks are executed with a combination of any of these buttons. Earthquake is missing entirely here. 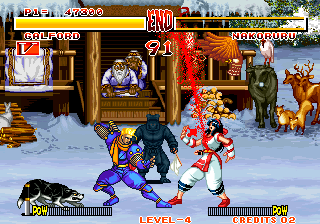 Despite the fact that the SNES usually had the superior versions of fighting games, its version of Samurai Shodown is pretty weak. It has absurdly small and bland sprites when compared to any other Samurai Shodown game and it’s like the whole game is fought in zoomed out mode. The SNES’ color palette is put to good use to mimic the Neo Geo’s lush backgrounds. They hold up quite well, though any animated sprites (Kuroko, the audience in Senryo Kyoshiro’s stage, etc.) in the backgrounds look just as terrible as the playable characters. In addition, many attack animations are removed completely, making for a very unbalanced game experience. While both games move at about the same speed, the Genesis version has noticeably tighter controls that feel more accurate to the Neo Geo original than the SNES version. This, combined with it retaining more moves from the original game (in hit detection if not necessarily in animation) makes for a more fluid experience than the choppy, brazenly stripped down SNES game. The SNES version has the advantage of featuring all characters including Earthquake, although his sprite is barely any larger than Nakoruru’s.

Both versions have vastly inferior sound to the Neo Geo. The Genesis version comes out on top again, though both have to cut back significantly. The SNES version has every sound effect and voice over from the Neo Geo game, but the sound quality is terrible. The Genesis version has many sound effects and voices removed, but what’s there sounds much crisper and clearer than it does on the SNES. The music in the Genesis version is a bit better since the SNES uses some really weird sound samples. It’s a testament to Takara’s skill that they were able to take such a graphically intense game and tone it down in different ways to take advantage of the different home systems of the time. 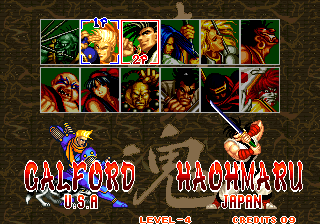 A final interesting note is that much of the dialogue is altered for both home versions. In the Genesis version, many quotes are clearly abbreviated to accomodate the Samurai Shodown font being displayed at a lower resolution in a much smaller text box (literally just two lines of text across the top of the screen). The SNES version however seems to have toned down the intensity of the dialogue rather than just the length. A good example is one of Senryo Kyoshiro’s opening lines of dialogue: “Now in this scene, I rip out his heart.” has become “Now in this scene, you cry like a baby.”

The Sega CD version was ported by another company called Funcom, and it’s the best of the 16-bit conversions. It looks a bit better than the Genesis version, and actually keeps all of the moves faithful to the arcade versions, even though there are still missing animation frames. It utilizes redbook audio to play music recorded straight from the Neo Geo version, and is the only 16-bit version to completely include the intro, with Haohmaru slicing a tree in half (including the narration omitted in the World version of the arcade game). However, there are a few trade-offs – the announcer only speaks in-between matches but never before them (i.e. the “SHOBU!” voice clip is gone entirely), the sound effect quality is pretty bad, Earthquake is still missing, and the judge is gone completely, as well as the running guy that tosses in bonus items. As can be expected, there’s also a whole ton of loading, which is definitely the Sega CD version’s worst issue. All three 16-bit versions lack zooming and suffer from pretty awful sound effects. The Genesis version is the only one with gore (despite being rated MA-13, the equivalent of a “T” rating in the ESRB system), although it’s not nearly as bloody as the arcade version.

The 3DO version was ported by Crystal Dynamics, one of the only companies that supported Panasonic’s CD based system. Strangely enough, it was called Samurai Shodown even in Japan. At the time in 1995, it was definitely the best port one could hope for. It looks almost exactly the same as the arcade version, with most of the frames, and CD quality music from the Neo Geo cart. It incorporates scaling unlike the 16-bit ports, but unfortunately, any time the camera zooms out, the frame rate drops and the animation gets pretty choppy. The sound effects are, once again, pretty poor, and there’s some annoying loading, although it’s not nearly as bad as the Sega CD version. It’s not quite arcade perfect, but it’s not bad, and even features full gore. The Neo CD version, like most Neo CD games, very close to the original, but adds a ton of load times, subtracts some animation, and sticks in an arranged soundtrack.

Samurai Shodown also made it to the PlayStation in 1998 as part of the Samurai Spirits Kenkaku Shinan pack, which also featured Samurai Shodown 2. Other than the annoying load times and some cut animations, it’s practically arcade perfect. The extra buttons on the PlayStation controller also let you execute strong attacks without having to press two buttons simultaneously. It even features the arranged music from the Neo Geo CD, unlike the Sega CD and 3DO versions.

Samurai Shodown also received portable renditions for the Game Gear and Game Boy. The Game Boy versions offers cutscenes that redraw all of the characters in super deformed chibi style. With the use of a secret code, you can play as Amakusa, Kuroko and Hikyaku the delivery man (the only time he’s playable.) The Game Gear version tries to emulate the look of the arcade game, but with much, much smaller sprites and a limited color palette. The controls needed to be scaled back in both versions as well – Light slashes are performed with one button, kicks with the other, and both combined will execute a strong slash. Like most of the console ports, Earthquake is missing on the Game Gear, but he made it into the Game Boy version. Considering the limited hardware, both are reasonably competent, but they pale compared to the later portable Samurai Shodown titles released for the Neo Geo Pocket.

Versions of this game also appear on the SNK Arcade Classics Vol. 1 pack for the PlayStation 2, Wii, and PSP, and the Samurai Shodown Anthology for the PlayStation 2 and Wii. The SNK Arcade Classics versions are a bit choppy, but they’re more playable than the other poorly emulated titles on this package. The Wii version is, thankfully, nearly perfect. Only the original soundtrack is available. There is also a version available for the Wii Virtual Console, which is also just a straight emulation. Strangely, the Arcade Classics pack is missing the arterial blood spray effect but you can still cut opponents in half. In the Virtual Console version on the other hand, the arterial spray is present but you can’t cut opponents in half. Odd. The Japanese Anthology (named Samurai Spirits Rokuban Shoubu) is the best way to go, featuring perfect emulations and both soundtracks without any censorship. 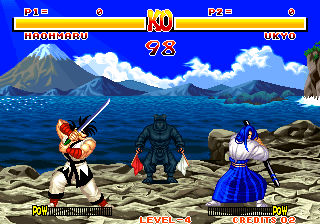 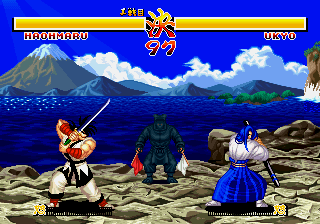 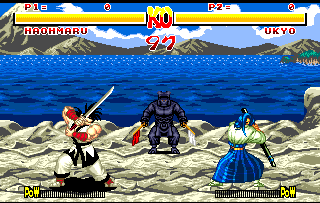 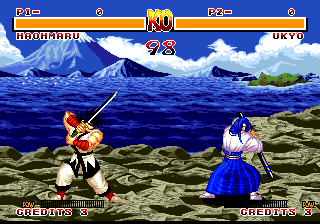 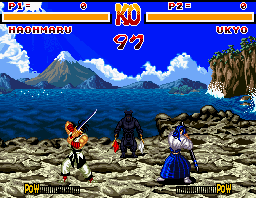 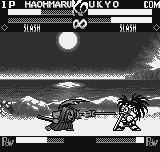