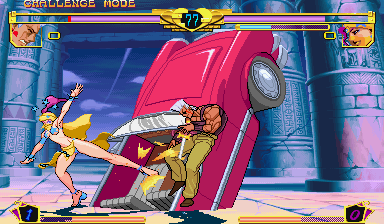 In typical Capcom fashion, a sequel titled JoJo’s Bizarre Adventure: Heritage for the Future was released less than a year after the original. Like so many Capcom fighter updates, it doesn’t really constitute a full sequel to the first game. Nothing here is that different or revolutionary from JoJo’s Venture. Though not a full blown sequel, it still serves as a significant revision to the original game. It is also the last game released for the CPS-3 arcade hardware. 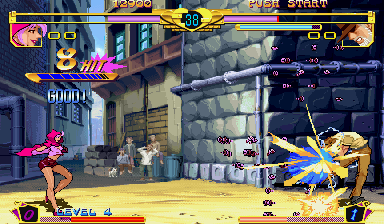 The gameplay has not changed significantly from JoJo’s Venture, but now there are some characters without a Stand meter. Rather than having them always on screen to attack and absorb damage, these character’s Stands will appear to attack and then disappear instantly. This means that from both offensive and defensive perspectives, players will have to be far more knowledgeable about the character they are playing. Some old characters also have new added special and super moves.

Aside from the roster, though, little has actually been added. The backgrounds and music are recycled (although there are a few new tracks to account for the bigger roster). Also, among the new characters only the instantly selectable four (Mariah, Petshop, Vanilla Ice, and Hol Horse) actually play differently from the old roster. The unlockables all play the same as characters which are already available on the main roster. It is good to have a larger roster but Kakyoin, New Kakyoin and Rubber Soul are all basically the same character, for example, only with different range for their attacks.

The four new characters, however, do add interesting game play elements, with Hol Horse and Petshop allowing for fighting from a distance and Mariah’s magnetism forces. To be fair, even the secret unlockables are fun to play as, although they are not all that unique. Playing the game, however, one gets the feeling that more could have been done with them to make them stand out more.

The new characters lack dialogue with other characters in their story modes, and only have an opening and ending narration. There is also no A.I. programmed for the new characters, so a single player is unable to face them in story or challenge mode. Frankly, a few small changes here would have rounded the game off much better as a complete sequel rather than an incremental upgrade.

In terms of game modes, the only new introduction is the Challenge mode, which works similar to a traditional survival mode. Life and super meters carry over from fight to fight and can be restored with each opponent beaten. It also intersperses a scoring system where the less health you lose and more supers you hit the more points you get. The player is then graded by Joseph Joestar with a sarcastic comment.

The difficulty of the opponents (especially in challenge mode) has been increased, and the boss form of Vanilla Ice has one of his attacks removed and has been made slightly easier. This all makes for a balance in difficulty which leads the gameplay to be less frustrating overall. 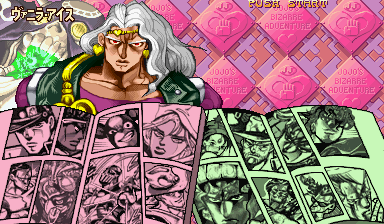 While the game does feel incomplete, being more in line with an upgrade than a true sequel, it is still the most complete JoJo experience around. It maintains the fast gameplay and style that made the first game so great. It just feels like it could have used more development time to extend it into a full sequel. It is, however, a great game and new players may want to skip JoJo’s Venture and go straight to the sequel which has all the content of the original.

A great many Capcom fighting games were ported to the original PlayStation, and JoJo was no exception. Like many of the CPS-2 games ported to PlayStation, JoJo isn’t a very good port. It is based off of JoJo’s Venture although it contains the cast from the second game, so it is more like a “JoJo 1.5″.

Upon starting the game, the first thing players are greeted with is an (admittedly colourful) loading screen. The loading times are not horrendous, but they are slightly annoying even with the vibrant artwork. Once you actually get in a battle, the differences become strikingly apparent. All the sprites have shrunk down and are now pixelated and blurry. (This is especially noticeable on the Stands.) Frames of animation have been cut quite liberally to fit the hardware. In result, the once smooth animation is now not only less detailed, but also looks choppy. Some techniques have animation removed altogether. 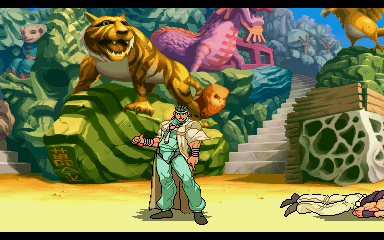 Blood, including its edited substitute, has also been completely removed from the PlayStation version, along with several small details. Jotaro’s cigarette and several win poses are just some of many animations that have vanished into thin air. In spite of all this, it does manage to transition the fast gameplay over fairly unscathed, just on a smaller, rougher scale.

Knowing that the game would be slightly lacking on Sony’s home console, Capcom did include some bonus exclusive modes. One of these, exclusive to the Japanese version, is PocketStation functionality. But the most important one is the “SP” or Super Story mode. Rather than just playing as one character you switch around between the cast, fighting each battle as it appears in the manga. It also allows you to face enemies who are not in any of the other versions of the game. For example, Kakyoin can now fight the Tower of Gray Stand in a one-on-one battle. Stands that were no outright fighters in the manga, like Strength and Judgement, are now opponents in a variety of mini games. Most of these are just simple quick time events where you have to hit a corresponding flashing direction, but some others are more fleshed out. There is a fun little R-Type-esque shoot-em’ up game with Kakyoin and Polnareff to defeat Yellow Temperance, and a simple game of poker.

The Super Story mode is far more thorough than the story mode in both the Arcade and Dreamcast versions. Due to the technical sacrifices on the PlayStation version, however, it is only really worth a playthrough for fans of the Jojo manga. It is a shame that there exists no version of the game that combines this mode with the arcade accuracy of the Dreamcast port. While the Super Story mode is interesting for long time fans, the cut frames of animation and loss of detail are hard to ignore.

JoJo on the PlayStation also has the obligatory gallery of character art, as well as a menu which holds all sorts of bizarre bonus features. They are also mostly just mini games, but it is a nice effort. This menu is fashioned after a certain book one of the villains carries around. Nothing mind blowing, but it makes for a few nice cosmetic touches.

Like most CPS-3 games, both JoJo’s Venture & JoJo’s Bizarre Adventure: Heritage for the Future were ported to the Dreamcast, placed on a single disc simply titled JoJo’s Bizarre Adventure. The ports are pretty much arcade perfect, with graphics, gameplay and content being the same as the arcade originals, save for some additional play modes. JoJo’s Venture now has versus, training, and survival modes in addition to the standard arcade mode. The characters that require button combinations to unlock each time in the arcades can now also be saved to VMU.

JoJo’s Bizarre Adventure loses the survival mode, as it would have been redundant with the existing challenge mode. It does get the Alessi mode, however, where players can customize a set of rules based around the kid forms of the characters which Alessi turns them into. For example, players can play as the kid counterparts for the whole round or set the rules so characters turn into children during a Stand crush. This mode is a nice bonus, but playing as the kids can mean that matches go on for a very long time. 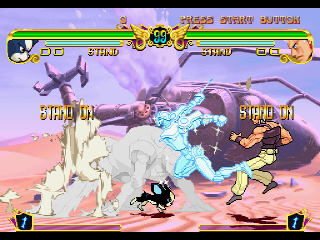 The Dreamcast version also introduces an Easy mode for each character, which maps the characters’ special moves to a single button. This is a good way to make the game approachable for players who are not familiar with the input motions of fighting games and just want to beat somebody up.

A Japanese exclusive Dreamcast edition was also released entitled JoJo’s Bizarre Adventure: Heritage for the Future for Matching Service which is the same Dreamcast port, although it had nationwide online play in Japan. With the Dreamcast servers long gone, this feature no longer works, of course.

Actually, there isn’t really that much difference between the Dreamcast and arcade versions of JoJo’s Bizarre Adventure, which is what makes them so good, being 99% perfect arcade ports. Nothing is lost or mangled in transition. The Dreamcast version is the port to get for anyone who wants to play JoJo.

The English versions of JoJo have a very “interesting” translation. To begin with, the JoJo series is known for naming characters after musical references. JoJo, for instance, comes from the Beatles song “Get back”. However, most of the names were not going to fly with our western copyright laws so several names had to be changed. Devo became D’Bo, Vanilla Ice became Iced, Abdul was changed to Avdol, Steely Dan/Rubber Soul became Robber Soul, and Boingo became Voingo. Names are also switched from Japanese to English naming order. Language is also generally toned down, with “destroy” being used instead of “kill”. The translation is very much a product of its time. Although it is mostly accurate, it just has some quirky lines.

There are, however, some graphical edits to the games. All the Japanese manga “sound effects” and onomatopoeia during attacks (expect for Vanilla Ice’s battle) have been removed with no replacement, and Jotaro’s smoking taunt is edited to remove the smoke, so he appears to just be turning around. All blood is either removed or painted white, and when Abdul is killed, his arms are no longer left behind. Dio’s death has also been edited from a bloody slicing and dicing to an off screen poke. These changes are consistent with the English arcade and Dreamcast versions, while the Japanese versions are uncensored. (The PlayStation version has no blood at all, regardless of region.) 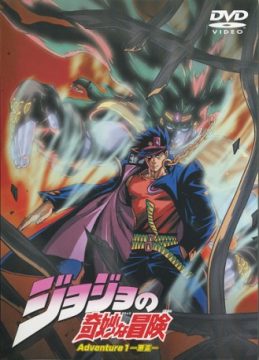 While the JoJo manga spans over more than 90 volumes, in the interest of both relevancy and sanity this article will just briefly introduce the third part of the series, which has been translated into English by Viz across 16 volumes, under the catch-all title JoJo’s Bizarre Adventure. This corresponds to volumes 12-28 of the original Japanese manga.

There are two OVA series based around the third part of the manga. The original series (produced in 1993) was six episodes long and chronicles the second half of the third part of the manga from meeting Iggy though to the final confrontation with Dio. The second series is a 7-episode prequel and starts from the beginning of part 3, explaining the background of the characters.

The OVAs remained relatively faithful to the source material, although due to their short length they omit some portions of the manga. Also, due to the length of time between releases, the two series have different animation styles. Both OVAs also have different voice actors from the games.