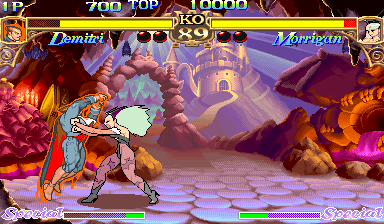 Darkstalkers was a labor of love on Capcom’s part, and it shows. For one thing, the graphics are absolutely gorgeous for when it was released. Darkstalkers‘ vibrant, anime-style graphics and animations make Street Fighter II and most of SNK’s games at that time look rather shoddy by comparison, and became the norm for all future Capcom fighting releases. The soundtrack is great (as is expected from a Capcom arcade game), and boasts an almost surprising level of variety.

But aesthetics and presentation aren’t nearly as important as gameplay. Capcom did all they could to make Darkstalkers more than just “Street Fighter with monsters,” and implemented a slew of new gameplay features. For one, it’s the first fighting game that allows for air-blocking – and additionally, Morrigan and Demitri were tossing fireballs in midair a whole year before Akuma hit the scene. Speaking of fireballs: instead of simply canceling each other out, projectiles in the Darkstalkers series push against each other, until the one with greater momentum overpowers the other and continues across the screen. Block canceling and reversals also make their first appearance, and it’s also the first Capcom fighting game to include a “dash” maneuver and a Super gauge (a pair of concepts borrowed from SNK’s games). The way Darkstalkers‘ “Special” gauge works, however, is somewhat unorthodox. When it fills it up, it begins flashing and slowly decreases over the course of several seconds. While it is flashing, executing a special move will result in an enhanced version of that move, emptying the gauge completely. Each character also has a unique EX attack that can only be used while the Special gauge is flashing. This “use it or lose it” approach to Super Moves is unique, but can be rather restrictive. Vampire is also the beginning of the series’ tradition of completely over-the-top super moves. Before, a Hadoken with a shadow-trail was considered an impressive super. Sasquatch’s tremendous ice beams and Victor’s screen-filling lighting attacks definitely upped the ante.

In terms of story, Darkstalkers is about as deep as the first couple of Street Fighter titles. In short: bunch of monsters decide to fight each other for some reason. All of them have their own backgrounds and goals, but they’re usually about as simple as “vampire wants to rule the world” and “horrible sea mutant searches for love.” But Darkstalkers is no poorer for this, and in the days before The King of Fighters, nobody really expected a story from a fighting game anyway.

Darkstalkers eventually saw a fairly decent PlayStation port. Load times, missing animation frames, and flattened sounds make it far from being arcade perfect, but it’s still Darkstalkers on a console. However, given that it came out in 1996 – two years after the original arcade game and a month after the Saturn port of Night Warriors – the PlayStation port feels a bit redundant. It was actually ported by European developer Psygnosis rather than Capcom themselves. The Japanese version also has a video intro featuring various gameplay footage and a vocal rock song called “Trouble Man”, which was used later on in both the anime and American cartoon. The staff roll also has a song called “The Rain”. Both of these were excised from the overseas releases, but remnants can be found on the CD.

Darkstalkers was pretty cool for its time, but is relatively unpolished and clunky compared to its sequels and more recent 2D fighters. Still, every series has to start somewhere, and if there’s one thing Capcom excels at, it’s tweaking their games with subsequent updates.