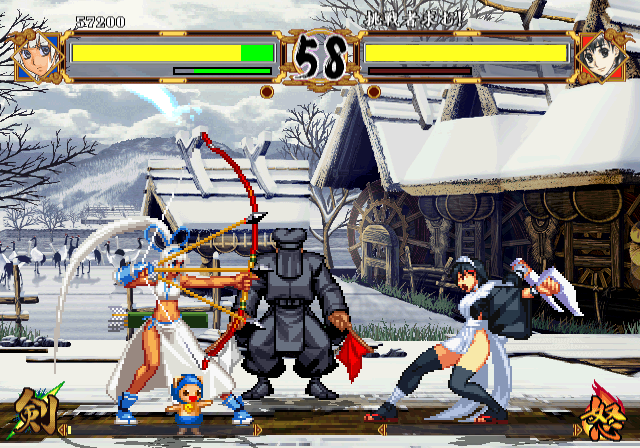 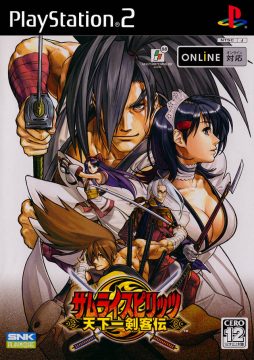 Around 2003, SNK finally decided their MVS arcade system wasn’t cutting it anymore, and made a partnership with Sammy to produce titles for their Atomiswave system (think of it as a slightly less powerful Naomi). Samurai Spirits Tenkaichi Kenkakuden (in the West once again simplified to Samurai Shodown VI) was released to Japanese arcades in 2006, and the final product, while not astounding, was still quite good.

Samurai Shodown VI‘s most notable aspect is that you can play as nearly every character from every previous 2D game. This means that the long neglected Samurai Shodown II characters – Cham Cham, Sieger and Caffeine – have finally returned. (It’s a shame they didn’t transfer Asura and Shiki’s sprites over from Neo Geo Battle Coliseum, though.) In addition to the already massive roster, there are also four completely new characters: Iroha, the massively endowed maid-warrior; Andrew, an American patriot wielding a musket; Ocha-Maro, an android thing that uses string attacks; and Sugoroko, an overweight warrior who uses a bell/cannon he carries around with him. This makes the roster over 40 characters, all boss characters included, so there’s plenty of diversity. The judge is even back too, after a prolonged absence. 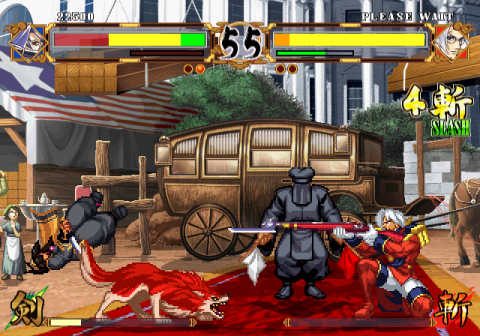 There are several gameplay styles available, similar to the “grooves” used in Capcom vs. SNK 2. Here they’re called “Spirits,” and are a mix of the different features used from the earlier games in the series. There are six in total: Rei, Shin, Dou, Ten, Zen and Ken. They affect everything from how your rage gauge fills to how and if you can use special attacks, and more. Rei, for instance, resembles SSV‘s system and Ten uses features from SSIV. Ken is a completely new style specific to this game and introduces a new defensive maneuver called the “Mikiri Slide.” While the systems operate differently in the games, SNK managed to make them fairly balanced to one another here, so choosing the one you’re most comfortable with isn’t a problem. The gameplay also is a little bit faster than its immediate predecessor, and combos are easier to pull off.

Many SNK games on the Atomiswave are kind of strange. Although the backgrounds are high-res, they used the same old sprites they’ve been using since the Neo Geo days. As a result, you have huge pixelated characters over crisp, sleek backdrops. Some of the old sprites have been cleaned up a bit, although it’s disappointing that they used Earthquake’s older sprite instead of his newer design from SNK vs. Capcom Chaos. In general, the graphical style is much brighter and cleaner than earlier titles, and there’s absolutely no blood at all either. Still, the new high-res and quasi 3D backgrounds are lively and lush, from the Japanese pavilion stage to the African savanna backdrop with the mountain range. It’s a throwback to the earlier games, whose battles took place all across the globe instead of just instead of just Japan. The backgrounds bustle with activity and make the action feel more hectic, as if you’re putting on a show and everyone is invited. The attacks also look really good – there are some nice particle effects going on, and activating your rage gauge just looks plain awesome. 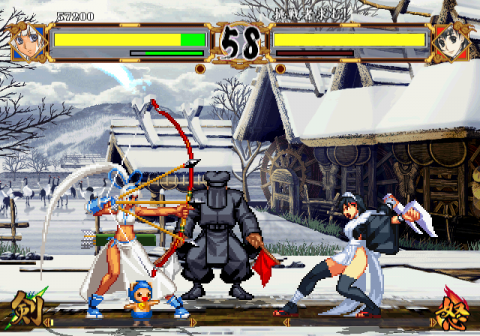 The music is also a departure from the rest of the series. It’s more orchestrated and symphonic than the previous titles’, and is meant to capture the “vastness” of the new game and its differing locales. There are vocal and festival style songs, although none of them really seem to capture the typical Samurai Shodown mood. There are both Original and Arrange soundtracks on the PlayStation 2 version, although they only vary slightly. Strangely enough, there are options for both Japanese and “English” announcer voices. Unlike the Xbox version of SSV, the lines aren’t actually in English; it’s just an American guy speaking Japanese. There are some amusing unlockables in the PS2 version, including a mode to create your own Spirit, the ability to play as any of the animals (who have their own Spirit mode as well), and adding Kim Ung Che, Gaira’s Korean counterpart, as a playable character.

The load times on Atomiswave games are pretty annoying, and the PS2 ports are often even worse. The original version of Samurai Shodown VI isn’t nearly as bad as Neo Geo Battle Coliseum, but they’re still a bit intrusive. Thankfully, on the Anthology pack they are significantly shorter.

Samurai Shodown VI is basically a farewell to the 2D days of the series. In packing together some many different styles and characters in an attempt to make the “ultimate” game, it’s wildly unbalanced, plus the aesthetic overhaul is kinda ruins the dark vibe the series had been known for. Still, there are worse ways to send off the series, and it’s not like any of the 3D entries were any better.