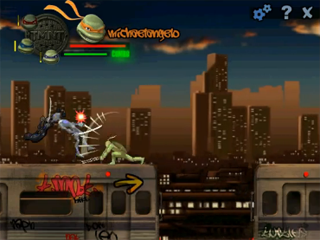 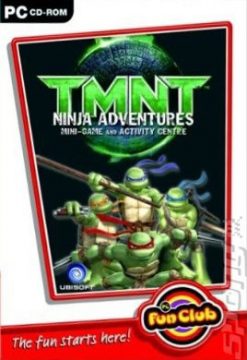 As part of a CD-ROM package released for the very youngest audience, Focus Multimedia delivered a small-sized adventure in the midst of screensavers, icons, and wallpapers based on the TMNT movie. TMNT: Ninja Adventures was only released as a sales product in the United Kingdom and Scandinavia, while in the US the game came packaged with several action figures in both the 2k3 line and the movie line.

Ninja Adventures takes place in downtown NYC during the night as the TMNT are out to stop a mystical shipment brought into the city by the Foot. This is taken from one of the scenes of the TMNT 2007 movie.

Being a mini-game, Ninja Adventures goes on for two stages of sidescrolling action, much like Kung-Fu Master, though also with some platforming elements. The first stage is on top of a New York city metro train car where the Ninja Turtles have to battle the Foot and also jump from car to car without falling inbetween. The second is on rooftops leading to the final destination of the mysterious shipment. Each turtle is selectable on the fly, and each of them have the same basic attacks and jumping capabilities, and there is also a brother meter in this game which fills up to allow for team moves. To end the game, the turtles must deal with the secret of what lies within the crate brought in by the Foot.

Ninja Adventures is more or less on par with the simplest of Flash games, a sort of game that is merely there because of fast product placement and marketing rather than to really provide any deep gameplay. Still, it’s not at all very well made to any extent, with choppy animation and dull, repetitive action. All the characters move at a rate where they skip two steps ahead and make the jumps hard to properly execute.

As an extra item packaged in with an action figure, the game as a stand-alone package is not worth any amount of money you could throw at it, even if it’s pennies.