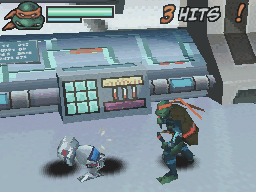 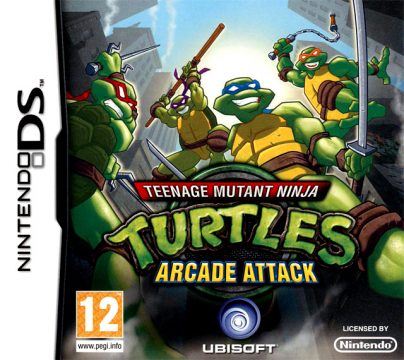 Shortly after the announcement of Smash-Up, Ubisoft teased yet another TMNT product that would also make use of the entire franchise and not tie itself down to any specific timeline or universe within. The announcement was largely overshadowed by the massive hype that surrounded Smash-Up and all of its promise, but the little information that did come out sounded impressive enough at the time as well. Revealing its name to be Teenage Mutant Ninja Turtles: Arcade Attack, the title promised to be a throwback into the past, celebrating the genre which had put the turtles solidly in the history books of video games and bring in characters from all corners. Arcade Attack would see release in November, two months after Smash-Up and just in time for the holidays.

As touted the game harkens back to the simple arcade bashers with the Ninja Turtles running through eight stages of mayhem to investigate a cybernetic disturbance. Arcade Attack doesn’t try to clutter up the concept or introduce tough controls or touch screen gimmicks, only making use of two buttons as in The Arcade Game and Turtles in Time. The biggest difference between the classic games and this title in design is the fact that it makes use of 3D graphics and allows for attacks in all directions, much like Re-Shelled had introduced. The camera is dynamic and will zoom in and out on the action as it happens.

The combat in Arcade Attack lends a little bit from 1-on-1 fighters to try to spruce a little bit into the gameplay, and the dynamic camera angles serves to help that purpose out by zooming in on the action in close quarters. Strikes are strung together in combos which are tallied up on screen and can be brought into triple digits by juggling and balancing out the attacks properly. Throws can also be performed in Street Fighter style by pressing both buttons together at the very same time. In addition to the standard strikes there are also a few strikes that can be performed from a set flips and evasions, and there are weapons scattered around in barrels and crates, along with pizza naturally. In close quarters, the camera can zoom in on a weapon lock, similar to what is found in Soul Calibur where two characters are grinding their weapons together trying to overpower the other, and in these situations the on-screen displayed button must be pressed rapidly in order to win the grind.

The game is also entirely co-op, and even in single player, the second character will be played by the CPU. Through the use of DS’s wireless multiplayer feature, two players can play together and work together by stringing combos together and reach high numbers, and also perform multiple team moves such as swinging eachother around and kicking furiously in a circle to take out a multitude of enemies.

Getting those details out of the way, it’s a good time to look at the actual license and how it is used. Being that Ubisoft promised a large and varied cast of familiar TMNT characters, it is only natural that the game mostly makes use of nameless thugs in track suits, and uses designs and characters exlusively from the 2003 series and not from any other previous TMNT license. But the representation is the least of Arcade Attack‘s problems. The entire game is quite the mess and is horribly underwhelming. The combat engine is so floaty and soft with absolutely no intensity to it, and the animations look akin to something on the early cell phone 3D titles rather than a late DS title. The graphics in general are incredibly hard to make any sense of with flat pixelated textures and blocky models which look nothing like what it is based on, especially in close up where there will essentially be a large square green block and a large black block with no detail on it.

The stages are probably the worst set of stages ever assembled in a TMNT game, basically consisting of a completely flat terrain with a few bars or alleyways in the background with no interactivety or activety for that matter. It’s in all a budget line game with little to no real effort on making it feel anything like the classic arcade games, and little effort to make a good game on its own for that matter. The dual screen is used to no effect whatsoever either, which is alright considering it would mostly just be gimmicks for pulling off a move or something, but they could at least try when they were already underperforming to such a degree already. There’s also little replay value to the game compared to how content heavy the titles have been since the 2003 title, but Arcade Attack only offers a ranking mode and harder difficulty once the game is completed, and why anyone would play the game over again, on a harder setting mind you, is anyone’s guess.

There is a small highlight to the game, the cutscenes. Featuring artwork by Eastman and Laird, the cutscenes are the only actually authentic TMNT content you’ll find in the game, and they are really well done, especially in comparison to the Smash-Up videos in similar style.

It’s clear that the name is all but a tease, a scam effort to lure in old fans of the genre and the franchise to think this is in any way similar or an ode to the old, but reality soon sets in that Arcade Attack is a quick cash-in and exploit of the name it holds with absolutely no real consideration given to the overall quality of the game.

Sadly, Arcade Attack would be the last game the TMNT franchise would see since the shocking events of October of 2009. With the television show having been sent to an end with the last season dubbed Back To The Sewers and the comic book from Mirage facing criticism over controversial storyline decisions and lackluster writing, Peter Laird quietly announced on October 21st of 2009 that he had sold the entire stake property of TMNT to Viacom and Nickelodeon, washing his hands clean, feeling he had managed to creatively do all he could with it. Nickelodeon on their parts quickly announced a new series set for 2012, which will again reboot the series.