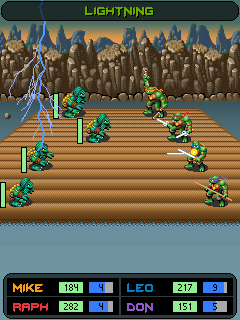 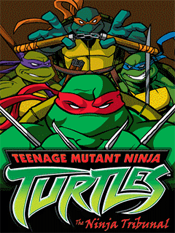 The very first TMNT game to be released in 2009 was Teenage Mutant Ninja Turtles: The Ninja Tribunal. When Fast Forward fast buried the franchise in a way only previously accomplished by a movie about the Turtles traveling back in time (see a connection here?), the producers of TMNT 2k3 decided to unearth the footage that they had shelved some years ago in favor of the futuristic fumble. The season was dubbed The Lost Season, and revolved around a plot in which the four bandana clad brothers go to Japan to train in the Ninja Tribunal in order to save Master Splinter and hinder the resurrections of ancient evil. Continuing the great work they had done with planning so far, 4kids never fully explained which season was which and where they fall within continuity, and to make matters even worse, The Lost Season was cancelled only after five episodes before it was finally made it available on DVD in early 2007. The DVD was then cancelled, then snuck onto the market more or less unnoticed about a year later. During this time, the episodes also began airing again on television. A mobile phone game made to coincide with the 25th anniversary, Ninja Tribunal, was based on the entire Lost Season.

Ninja Tribunal is interesting in that it takes its main inspiration from three titles – Final Fantasy, Chrono Trigger and Adventures of Lolo – which might sound like a funky combination. Set during the majority of the fifth season, the game is, as expected, a rather large-sized RPG, using turn-based combat in an overworld with visible enemies rather than randomly generated battles, combined with intricate puzzles usually surrounding the idea of pushing obstacles together in an order which unlocks a door or frees up a road. There are also some vertical-scrolling raft sections where the Ninja Turtles must avoid certain hazards. The battles are of a very familiar kind, with all characters taking turns and having a list of options on how to approach the fight. The turtles can level up by grinding enemies and acquire new skills and improve their Chi moves, which acts as this game’s version of magical spells.

If compared to the DS library or PSP, then Ninja Tribunal doesn’t quite stack up in terms of overall quality, mostly due to the weakness of the Java-based mobile phone platform, but if it is judged solely on the grounds of the mobile phone market, it holds up remarkably well. It has really great graphics on both sprites and locations, and some impressive music considering the usually weak midi loops employed in these kind of games. The story and the length of the game is quite deep, all things considered, and it’s told relatively well. However, the battles do drag a bit and quickly get a bit uneven as one delves deeper into the game. There is also a Battle Mode in the game which is similar to a boss rush mode.

If you ever wondered what would happen if you cross Final Fantasy and TMNT, then your answer is here: you end up with a middle tier SNES-style RPG, but one with actual quality to it and with some value to longtime fans. It’s well worth a try, though just keep expectations in check. 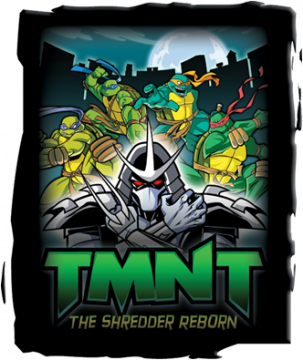 Continuing exactly where Ninja Tribunal left off, Shredder Reborn is the sequel to the mobile phone RPG released earlier in the year.

In terms of new additions to the game, there aren’t much to speak of; rather, it is just an “episode 2” kind of game which is meant purely to continue the story that left on a cliffhanger in the first game. At roughly the same size and length, it’s just as good and bad as the first game, though it sports slightly cleaned-up sprites and better-balanced battles compared to the sudden spike of difficulty seen in Ninja Tribunal. There is also a bit more emphasis on all the different aspects to the game now, with more storytelling and puzzle-solving instead of the heavy focus on action as in the previous title.

In another stroke of genius, Shredder Reborn was released on Android and Blackberry units in addition to the standard Symbian model cell phones. Even though Ninja Tribunal was just released mere months earlier, that game did not receive any release on the other models, meaning that Android users will only get the latter part of the story. Of course the story in Shredder Reborn isn’t exactly earth-shatteringly complex or refined, but it’s still very noticeable that something is missing when the very first cutscene makes references to events from the previous game. For those who can get over the little hurdle waits a version with better graphics and sound.

Shredder Reborn is definitely better than Ninja Tribunal and enjoys the fruits of the extra polish, but it’s still not quite on par with any given good-to-average handheld system RPG.