At the very tail end of its mainstream lifecycle, Sega Master System got plenty of great platform games to give it a proper send off and say good bye to the loyal fan base. Sega published games such as Asterix, Land of Illusion and Sonic Chaos all within the early to mid 90s and showed that even with the outdated hardware, they were still able to push out quality titles that were well worth the money. Just like Mickey had gotten his own exclusive sequel in Land of Illusion, Donald also got a brand new adventure on the Master System, Deep Duck Trouble, released in 1993. Emirin returned as the designer, but the game development duties were given to Aspect, who also handled the programming for every Sonic game on the Master System. 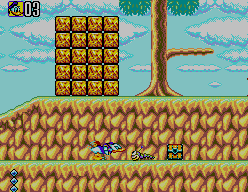 Uncle Scrooge returns from one of his many adventures with a sacred pendant which he found on an island during his expedition. Unfortunately for Scrooge, the pendant is cursed, and whoever removes it from its rightful home becomes cursed by blowing up into the size of a blimp, floating around in air and forced to be held down by a string to prevent floating into the blue skies. Once Donald and his nephews discover him floating around, Scrooge orders Donald to take the pendant and return it to the island statue where it belongs. Uncharacteristically, Donald can’t wait and sets out immediately on his boat to venture onto the island.

Deep Duck Trouble follows the standard platform game mold and doesn’t stray away from any of the game conventions you’d expect to find in a side scroller. Taking place across seven levels with three sections each, Deep Duck Trouble allows the player to choose his own route and pick whichever they may please, except for two final stages inside the temple where you’ll find the sacred statue. The levels are also of the usual bunch – forests, lava filled caves, mountain tops, underwater stages and ice caverns. Each stage has an end boss, which like in Lucky Dime Caper is often a wild animal trying to eat Donald. The boss sections are the most unique part of the game as they take place in an “action mode” where Donald is being chased at high speed, and players need to use quick reflexes to not only avoid the boss, but also avoid obstacles along the path he runs. 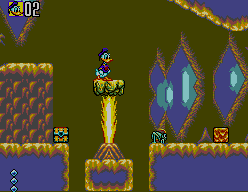 Donald is a bit more defenseless in this game than in the prior games. Apart from the standard jump-on-the-enemies-head offense, he doesn’t have any plunger guns or hammers this around. Rather he can now kick blocks when standing next to them, very similar to Uncle Scrooge’s attack in Duck Tales on the NES. Much like that game, Donald can also discover treasures by kicking blocks into walls or create bridges by kicking them into potholes. Donald can take three hits before he throws in the towel, but the game has infinite continues which starts you at the stage select screen. The enemies in this game consists exclusively of wild ravaging animals like bats, killer birds, mountain goats and crabs. No other Disney characters appear outside of the opening and ending cut scenes.

Being produced so late, Deep Duck Trouble definitely offers some of the best graphics you can get on the Master System, and Donald’s animations are exceptionally smooth for the system. The characters and backgrounds are also rich and detailed with plenty of personality and depth, though the levels are not overly engaging visually or interactively. There are plenty of items to find, with ice cream cones and roasted chickens replenishing health, while diamonds and money bags ups the high score. There are also 1-ups and chili peppers, which makes Donald invincible and unstoppable in his tracks when consumed. The music was composed by Saori Kobayashi under the pseudonym Satoru Kobayashi, and is sadly a bit on the bland side. Kobayashi would later go on to compose the soundtrack for Panzer Dragoon Saga on the Sega Saturn. 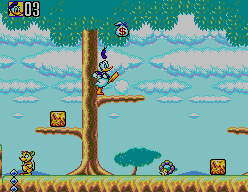 Deep Duck Trouble doesn’t quite live up to the standards set before it by Castle of Illusion on the Master System, and suffers from many of the problems that Lucky Dime Caper also suffered from. It’s just too easy, short and unimaginative. Beyond the terrific graphics and accessible controls and gameplay, there’s just not enough to really capture the magic that many of the other Disney games have and the alternatives are just so much stronger in comparison. The humor and visual presentation of Donald is pretty funny throughout however, and the ending provides a good laugh.

Like most late games on the Master System, a Game Gear port was released. There are no differences between the two versions. Majesco re-released Deep Duck Trouble along with the Game Gear in the early 2000’s and as such became very easily found in game stores and supermarkets. 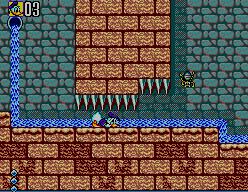