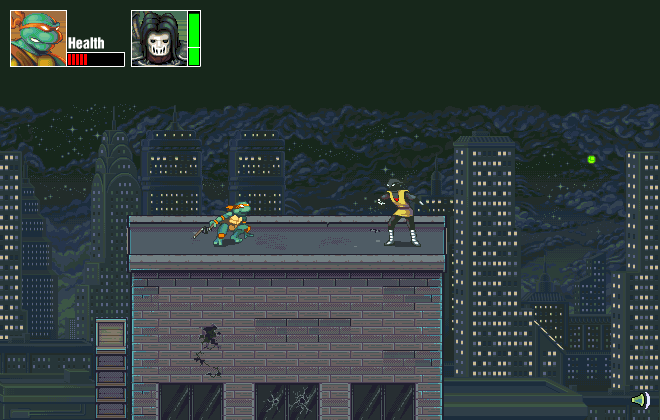 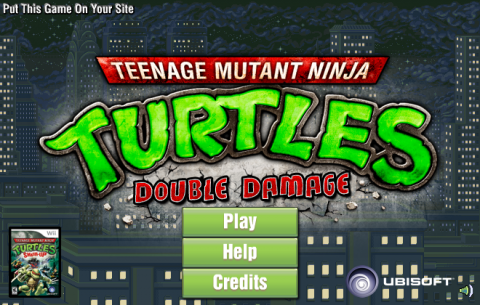 To promote their upcoming console title, Ubisoft commissioned Flash game developer UrbanSquall to handle a small action adventure for browsers in the days leading up to their newest release. UrbanSquall had earlier had success with the Battalion series and the puzzle game Tikiballs: Curse of Tane.

Double Damage is a sidescrolling platform actioner, with the Ninja Turtles throughout NYC on the familiar mission to stop the Foot and The Shredder and save April.

Before each of the 15 stages, there is a choice of any of the four turtles and an extended set of team characters, all with their special team ability. The turtles themselves have the same moves, though they have individual strengths that factor into the choice on some stages. Leo and Don have the long range weapons, with Leo’s katanas being more effective towards Foot Clan foes and Don handling machine-based enemies better. Mike and Raph have shorter range weapons, though their overall strength is significantly better than that of Leo and Don.

As team members, each of the turtle characters have different advantages as well, with Leo attacking all enemies with equal amounts of strength and Raph striking the screen on a straight path with extra power towards the Foot. There are also additional characters available to partner up with: Splinter, who will unleash a devastating screen-encompassing attack; Casey Jones, with his super attack along a straight path; and the greatest support character in TMNT‘s long history, the unnamed random Pizza Delivery Boy who will come on screen to deliver a life-replenishing pizza.

The game controls entirely with the use of the arrow buttons along with A for strikes and S for team specials. Each turtle has the ability to double jump, which becomes very useful across the New York rooftops, and they can also wall-jump Ninja Gaiden style to climb narrow spaces. In order to pull off the team special, the team meter on the top left corner must be filled up, either by collecting green pellets or ooze canisters on each stage, or by beating enemies. There is also a Mario-style ground pound move that can be performed mid air by pressing Down and Attack.

The stages are separated into three categories – Standard, Ambush, and Boss, with Ambush being a constant rush of enemies from all angles. After four levels a story sequence plays in the style of comic books, and scenery changes as the Ninja Turtles traverse the Big Apple.

For being a free browser game, Double Damage is not bad at all, being more in line with the old Game Boy titles in terms of overall style, minus the great music. It’s a bit on the easier side with each stage being more or less a two-minute affair where every enemy can more or less be avoided with some double jumps, but the controls, graphics, and cutscenes are fairly attractive and well done. Considering it’s just a free promotional tool, it’s of some quality and enjoyable in its own right. And it stars Pizza Delivery Guy.