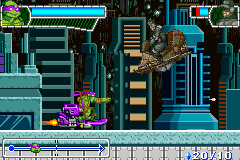 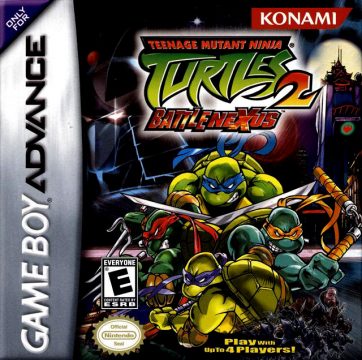 Unlike the console version, Battle Nexus on Game Boy Advance actually goes out of its way to deliver more of what made the first handheld outing as good as it was, and manages to impress in many areas. It was released in the same window of time as the console versions.

Sharing only the storyline based on the second season, the Game Boy Advance game focuses on 2D platforming action utilizing each brother with their individual skills going through three worlds consisting of six levels, splicing in several types of game with the returning horizontal shooter sections and crosshair laser shooting ranges. Each stage presents a small maze section, and begins with the turtle of choice out unarmed of their signature weapon, requiring the use of stealth and exploration to uncover its location. Battle Nexus is the first game that actually makes Ninja Turtles use their ninja skills, with the game taking some ques from Metal Gear by utilizing shadows and hidings spaces to avoid the enemies as they patrol the areas. Once the weapon is retrieved, the turtles are able to go into combat better than ever, each with their own set of moves and special skills such as Raph climbing walls and Michelangelo once again hovering with his nunchuks. Each world has some rather extravagant boss battles, often filling more than half the screen and offering a different challenge from one boss to another. Each stage requires a mission to be completed, often in the form of collecting crystals or unlocking a door.

Apart from the semi linear Story Mode, there are also the challenge based Battle mode, which features 18 different challenge that must be cleared within a short time limit, and allows for record and high score competition with other players. Race mode offers a good selection of stages where the Ninja Turtles race against eachother on hoverboards Sonic Rush style, going through futuristic rail based locations at blinding speeds, twisting and looping over walls and pitfalls. Completing these challenges or game also unlocks passwords for the console versions as well as the handheld game.

It’s somewhat surprising that Battle Nexus on Game Boy Advance manages to be such a polar opposite of its console sibling by actually improving upon its own concept and bringing in fresh ideas and fun varied gameplay. The graphics are gorgeous for its time and platform, and the colorful bosses and fluid animation only helps to make the second handheld title of the 2k3 lineup one of the stronger TMNT games released for both old and new fans to the franchise.