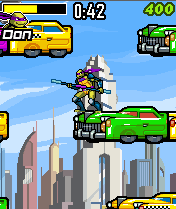 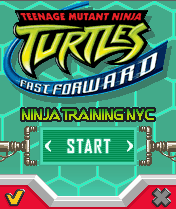 During the course of the TMNT 2k3 series, viewership had began to nosedive during its third season in the latter parts of 2005. The show’s next season was held back to properly strategize the direction to take. TMNT 2k3 had ultimately suffered from weak writing, making use of very involved plots but not comfortably telling the stories needed to be told, and as such the audience left. The decision was made to entirely skip the next season in favor of airing the semi-reboot Teenage Mutant Ninja Turtles: Fast Forward, sending the brothers into the future and equiping themselves in cybernetic armor. Fast Forward had a distinctly different art style and the tone was much more lighthearted than before, though it failed to make any great impact on either ratings or merchandise due to the paper-thin premise. Only one game was produced to tie in with Fast Forward, Ninja Training NYC.

Ninja Training NYC is very much a standard action title for mobile phones, dumbing the concept down to make it suitable for a numberpad controller without any complicated controls. In this game, the TMNT must train in two specific categories, Combat and Agility.

In Combat, the turtle is situated center screen and must take out holographic men in suits wearing towels on their heads by pressing 4 or 6 repeatedly, or 2 in order to jump and attack. Certain enemies will drop special items which can be used to refill energy, and there is also a special meter that fills up; when full, it can be used to launch a shellshocker attack using the 5 key.

In Agility, the turtle of choice must run left or right to find the correct car which will fall down or find a hole to avoid getting killed off by the downward scrolling screen. The speed of the scrolling increases over time.

There’s nothing particularly interesting about Ninja Training NYC – really average graphics, shoestring sounds and no real challenge whatsoever. It’s a two minute timewaster while waiting for the bus at best, and even two minutes is being generous, though even that’s better than watching the aptly-named Fast Forward television show.

Like most big movie titles, a mobile phone tie-in was developed for the TMNT movie and was available on all Symbian phones a few weeks prior to the release of the console video game and the movie. Based very loosely on the events on the film, Power of 4 consists of mixture of platforming stages and high speed chase sequences.

The platforming stages are heavily influenced by the old Shinobi games, featuring a lower plane and upper plane which the turtles can jump onto, and crates that can be either smashed or used for cover from gun-wielding maniacs and later sword-wielding Foot. There are also some roadside objects which can be used to your advantage like a block of logs which rolls down over any enemy which stands in the way. The Turtles are controlled by the surrounding buttons 4 and 6, while 2 acts as a jump and 8 crouches down. The 5 button will attack. At certain points, there are also other objectives such as protecting April from being hurt in order to complete the mission.

The racing stages are overhead high speed stages where the turtle van is being chased by the prehistoric mythical creature seen in the film along with other baddies. The goal of these stages is to spill oil onto the street to keep the opposing force at a distance. 4 and 6 steer the van in different directions.

These two types of stages take turns between levels, but neither works very well, mostly due to absolutely disastrous controls – a common fault of most Symbian-based cell phone games. The whole game runs at grandpa speed, and there is such a huge delay between the buttons being pressed and the actual action taking place that you might as well just imagine the game in your head and have the game be responsive there, because that is the only way you’re gonna have any fun with Power of 4. There are so many occasions where the turtle will just simply not respond or do something entirely different, either due to the game being poorly coded or because your fingers are too fat to dial the phone. Jumps can only be performed straight up, and while you can walk while in a crouch position, the turtle moves even slower then. The worst part is when the mission turns into an escort mission, where April will just simply walk into the line of fire while you frantically try to dial Satan’s number to ask to be spared from playing this game further.

The only parts of the game that can be considered somewhat enjoyable are the driving stages due to the fact that they don’t involve so much intricate controlling. It’s a short-lived feeling of fun, however, as there is only so much driving to be done before the sidescrolling part returns. The graphics deserve some praise and are actually very impressive considering the platform, but there’s very little animation in the overall game.