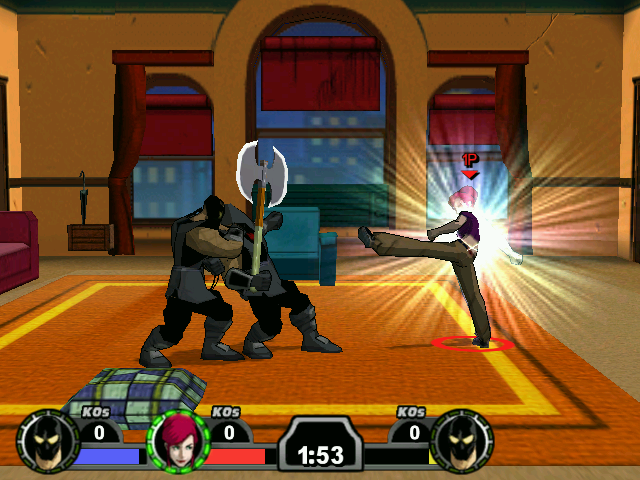 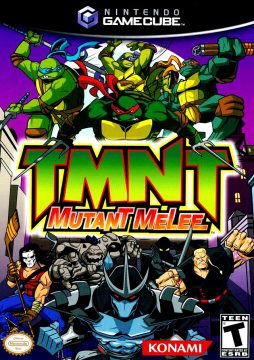 As the name suggest, Mutant Melee is a melee style fighting game, combining the elements of the previous 3D brawlers with the quick paced multiplayer fighter like Smash Bros and Power Stone. The attacks consist of simple dial in combos using the Attack and Alternate Attack buttons in sequence or in combination to trigger different moves. Each character controls largely the same, with different speeds and reach to differentiate between them. Apart from the standard attacks, items are scattered about and can be picked up for a limited amount of strikes.

Being an arena fighter, the game hosts a wide range of stages for players to engage in combat on. The arenas are taken from all over the 2k3 animated show, with nearly every dimension, location and memorable scenery being represented in the game. Each stage feature a large number of interactive elements that can be broken and destroyed for items and other power ups, like pillars, boxes and furniture. Certain pieces of furniture and decorations can also be lifted up and used as a weapon.

There are two main modes of play and three categories of rules to play under. Adventure Mode is a string of levels tied together where the character of choice must overcome a set of obstacles and challenges displayed onscreen before each stage, while Melee Mode goes right into battle, allowing for up to four players to battle each other under the rules of Last Man Standing, Knock Out, King of The Hill and Keep Away. Last Man Standing is fairly self explanatory, while Knock Out awards points for each KO performed. King of the Hill and Keep Away are the two more interesting rules, as King of The Hill requires players to stand in a beaming circle that appears randomly over the map and will only award points when one single player stands inside of it, while Keep Away places a chest on the stage which needs to be carried off and guarded from the other players, however carrying makes it impossible to be on the offense. Adventure Mode unlocks several characters and secrets by playing through it.

It’s quite evident that the game was rushed to reach the spring season because Mutant Melee is paper thin, and the production values are of shoestring budget kind. Rarely do you see a game that actually manages to make the stages look like cardboard cutouts like in a Z-grade movie, yet in Mutant Melee, each of the stage are so cramped, flat and unimaginative that even the most jaded of fans would have a hard time keeping these set pieces standing. A few show some attempts of branching a bit outside the rectangle barren two colored style this game has going by adding cars driving across the stage mid fight or roofs collapsing, but it only serves to frustrate further just how empty the experience is. The graphics unbelievably takes a larger step back in this game, so much so that it actually looks like a generation too late with the characters being distinctly block like and the shading being flat, not having much shadow or tone to give it depth. Most shockingly perhaps is the fact that even though the game takes place in such small and claustrophobic space and doesn’t feature much in the way of visual effects, it has frame rate issues on all consoles.

And it’s the ultimate death sentence for the game to have such shoddy controls and unengaged fighting engine. Building heavily on the moves seen in the previous 3D games, the combo system doesn’t work at all in a melee fighter such as this, with long delays and cheap hit detection which usually results in hits landing when they really shouldn’t, or characters being knocked dizzy without rhyme or reason of the weakest of strikes. Like with Battle Nexus, there is little incentive to actually investigate move sets much further than just spamming one button until victory.

To find any true positive in the game, the standard assortment of unlockables and bonus content proves to be very interesting and well presented as had become the norm with this line of titles. The most interesting extra is the inclusion of the first issue of the Mirage comic book in its entirety, giving a broad audience a chance to discover the true roots in a slightly censored edition of the historic issue. There are also a larger assortment of comedy sketches using a slightly enhanced graphical layout with the entire cast of the game acting out of character in bloopers and NG shots made just for giggles, and works quite well since it shows that at least in one area of the game, the developers had a lot of fun with the assets. Mutant Melee also offers a first time opportunity to take the role as a Foot Soldier and battle the Ninja Turtles.

But when a game only provides entertainment from either reading or watching 10 second long cutscenes, there’s no saving grace. Mutant Melee is a rushed and messy experience which feels completely devoid of all charm and fun that is needed for a TMNT title to be enjoyed by any audience.

Mutant Melee was released in identical versions on all home console systems and the PC, though again the PC version is criminally sloppy and quickly ported from the Xbox version. It also suffers from a plethora of game crashing bugs which are triggered by the sound clips, and graphically, while it does support higher resolution, this is not natively supported, and the graphics are merely upscaled with a blurry filter from the SD resolution. The extras in the game like the first issue comic book are also incredibly pixilated due to it being viewed on a higher resolution monitor rather than the TV. This was the last of the Konami games to be given a PC version. No handheld version was produced.