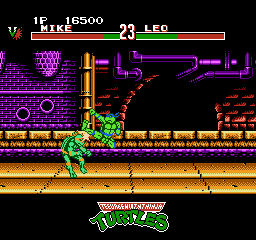 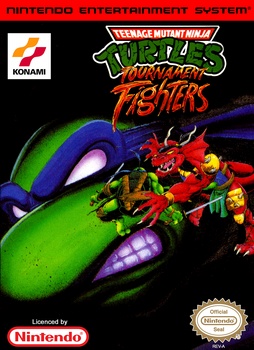 The ninth last officially released game on the NES, Tournament Fighters took to the 8-bit arena for one last showdown with the characters that had helped solidify its place in pop culture and on the sales chart. Strangely, Tournament Fighters was released on the European market, but not in the Japanese market, even after Manhattan Project was not released in Europe at all.

Dealing with a much weaker technology, the game is significantly smaller than its 16-bit counterparts, though it’s not in all ways inferior. The storyline in this game differs from all the other games, and is perhaps a bit illogical in the way it is presented. Shredder is again the main antagonist, and Splinter has once again been abducted, though the turtles decide to fight amongst themselves to prove their worth to finally challenge Shredder to a final showdown. Along with the four green machines, Casey Jones and Hothead also join the battle.

There are four modes of play in the game, Story, Vs CPU, Vs Player and Tournament. The Story mode is the official storyline played out through a series of matches, finally culminating with the showdown with Shredder to free Master Splinter from his clutches. During this mode, only the four turtles are available for play. There is also a bonus stage in the midst of the Story mode. Vs CPU and VS Player are the standard versus modes where any character is up for grabs in standard exhibition matches, where also stages and handicaps can be set. Tournament is a 1-4 player mode where players can sign up and go for the price in a series of 1-on-1’s to determine the best. 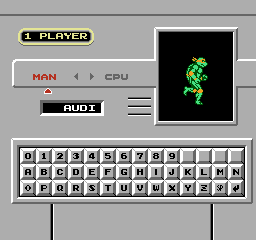 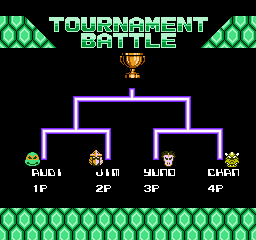 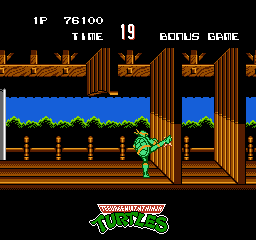 With only two buttons, the controls are more comparable to the Genesis game, and each character has an assortment of special moves, mostly single projectile based move along with two dash moves to counter quickly. However the special moves in this game are not particularly strong in comparison to other fighting games, and the reason is because of an item which is dropped randomly on each stage named the Ultra Ball. Any character is free to pick it up, and doing so allows for whoever is in possession of it to perfrom an ultra attack which is basically a glorified fireball which knocks a good percentage off the recipients’ health bar. Once the ultra attack has been executed or if the holder is knocked to his feet, the ball bounces back onto the stage, so it adds another level of intensity with both players racing to pick up it up. Despite being an NES title, each of the moves are animated fairly well and look good, even if there is not many of them.

Even with just a few moves each, the controls are reasonably well done for an NES fighter and they respond well to the commands. The graphics as well are very well done, with Hothead’s large sprite being fairly impressive by NES standards, and indeed, his size makes him unable to be chosen for a mirror match in the two player mode despite the other characters being able to do so. The challenge is pretty even throughout the game as well, increasing per stage at a comfortable pace. The soundtrack is largely uneventful and quite a disappointment for a TMNT game considering its musical legacy, though there is some interesting sides to the sound aspect of the game. The composer of the game, Syun Nishigaki, would go on from this game to compose the Akuma theme for Super Street Fighter II Turbo and become a prolific composer in his own right over at Capcom working on the Resident Evil and Street Fighter Alphaseries, making him the only direct connection between Capcom and Konami in the Tournament Fighters series.

Due to technical limitations and demand, Tournament Fighters NES is an extremely short and rather uninspired game. It’s not bad, playing well above what the Genesis game does, and for an NES fighting game it’s a good effort, but it doesn’t offer much to make it stand out among the other games. Due to its late release, it has become perceived as a rare game and collectible for NES owners. The cover features Leonardo fighting Hothead.

The NES version of Tournament Fighters is the first video game to depict the TMNT without their signature weapons, as they are nowhere to be found and the game focusing solely on hand to hand combat.