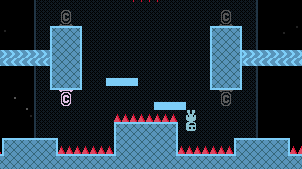 VVVVVV is one of the best 2D platformers to arise since the end of the 16-bit era. It is eloquent in its simplicity, yet challenging and varied enough to avoid the dreaded “casual” label. It exemplifies the level of difficulty found in old-school games, while avoiding the frustrations that come with it. Its look and style heavily channels the Commodore 64, taking the best from its era while avoiding the clumsiness so often apparent on the platform. 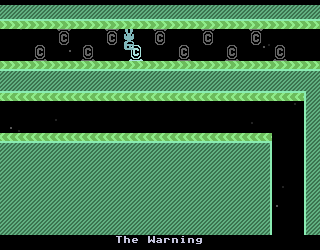 The story puts you in the shows of Captain Viridian, whose spaceship is sucked into some kind of void, leaving himself and his crew stuck in various parts of some strange alternate dimension. (The names of the crew members – Veridian, Vermilion, Violet, Verdigris, Vitellary and Victoria – is where the game gets its name.)

The entire game rests on a single mechanic – the gravity flip. Your character cannot jump, but instead can switch gravity back and forth at a press of a button. The first few screens teach you how to use this to avoid a pit of spikes, but the precise movements you need to make quickly grow more complicated. A central aspect to remember is that you cannot change gravity in mid-air, and need to hit solid ground before you can flip gravity again. Numerous games have featured similar gravity switching, like Gravity Man stage in Mega Man 5. Irem’s NES title Metal Storm was even built largely around the same idea. But in those games, it was simply a mechanic bolted onto the standard running-and-gunning. The entirety of VVVVVV is devoted to it, requiring a splendid mastery to progress. It does take a little bit of getting used to – the controls are slightly slippery, and since it uses flip screen scrolling, you can’t always see what you’re flying until unless you’ve seen the screen ahead of time. 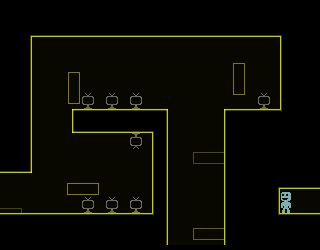 Such a simple mechanic is iterated and put to different uses in various video game-type challenges. One stage, dubbed “The Tower”, is one continuous upward auto-scrolling area, similar to stages in Super Mario Bros. 3 and Castlevania III. Another area has tripwires which will automatically flip gravity when you cross it, requiring deft maneuvers to ping-ping yourself between platforms. There’s even a brief escort-type mission where you need to guide a comrade to safety – he’ll follow you if you’re on the ground but stay put if you’re upside, and while this section is brief, an understanding of the pathfinding mechanics is necessary to get anywhere.

Death does come quite often, usually when flinging yourself into a bed of spikes, but it’s really here where VVVVVVworks so fantastically. Checkpoints, denoted by little “C” markings, are remarkably prevalent, usually with at least one – and occasionally more – per screen. Since they’re practically everywhere, the only penalty for death is losing a few seconds, and your lives are unlimited, although it does keep a running tally of death counts. By making player death so inconsequential, it allows the individual sections to be more challenging, and thereby engaging, than typical platformers. If this was running by the “three lives, get tossed a few screens back” model in some of these challenges, VVVVVV would be an incredibly difficult game, but as it stands, it’s light and breezy. 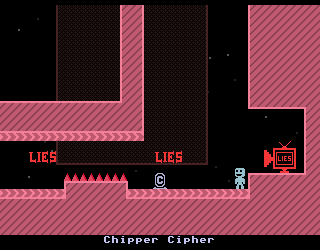 The only really, really difficult is a series of screens that’s likely to cause any length of time is surmount is known as “Veni, Vidi, Vici” section, which is sort of like those sections in Mega Man where you drop down a narrow series of shafts and have to avoid the spikes on the walls…except done over six screens or so, twice, once upside down and once right side up. The screen before it is called “The Warning” to includes dozen checkpoint markers all placed next to each other. Obviously putting all of these next to each other is functionally useless, but it sends a subconscious message to the player – something SO CRAZY is coming up that you’d better well be prepared.

VVVVVV is lacking the cynicism of other retro-style throwbacks like Battle Kid and I Wanna Be The Guy, who pretty much just existed to remind people how difficult NES games were without really providing anything worth playing outside of irony. It’s also better than just big-time corporate games like Capcom’s Mega Man 9, Konami’s Wii ReBirth series and even Retro Game Challenge / Game Center CX – those games simply offered refined versions of the games of yore, and while they did them very well, it’s still pretty much same old, same old. VVVVVV, like Super Meat Boy, another platformer released around the same time with vaguely similar sensibilities, removes the aggravations that were a necessity in the olden days and instead something that actually feels modern. It’s been a long, long time coming. 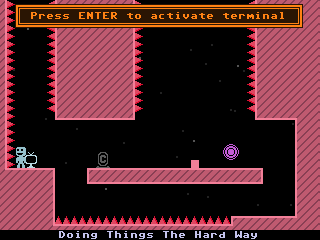 Tracking down your crewmembers requires a bit of exploration, to the point where it’s sort of a Metroidvania…but not really. There’s a central hub where you need to find the other five levels, which can be be conquered in any order (though these sub-stages are linear) but there are no skills or upgrades or anything hidden like that to find. You merely explore.

It’s fascinating that something so simple can be so compelling. Both Metroid‘s and Castlevania‘s exploration is heavily loot driven, in that the reward for heading down a dead-end would be a missile upgrade or a new sword. That aspect is mostly removed — there are still “trinkets”, literally named as such, which functionally don’t have much purposes other than unlocking stuff, but provide some extra compulsion to take on additional challenges. But even without those, there’s still the joy of exploration itself. Central to this fun is the gravity-flipping, of course – the big difference between the hub world and the sub-levels is that the hub world is relatively free of danger, allowing you to reverse your direction and take off into the sky with abandon. 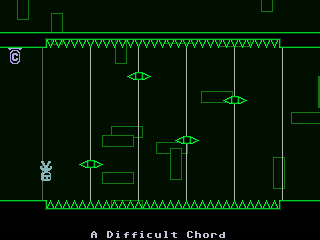 The pacing is central to the experience, because not only is your movement expedient, the game world is both small and open enough so traveling never becomes tedious. If you were to run unimpeded from one side of the world to the other, it would take maybe a minute, plus the map wraps both vertically and horizontally. Plus there are transporters everywhere, in case you need to reach a far off spot. And yet in spite of how easy it is to travel, there’s still lots of hidden niches that can be found through multiple passes.

The world of VVVVVV is pretty plain yet subtly effective, with the Commodore 64-style visuals being a major part of the appeal. The game boots with a fake loading screen with cycling colors. Your crew members’ heads look like those smiley faces in the ASCII character set (and change to a frown, complete with a distressing sound effect, whener you die or something else sad happens.) Each room is given a pithy name, similar to Jet Set Willy. In spite of its intentionally low-tech nature, it’s still nice to look at, with each screen possessing a different color (and sometimes flipping between them.) 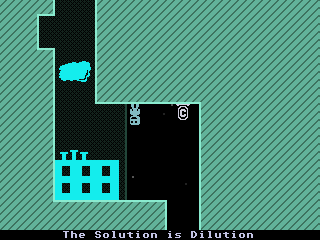 There are alot of non-sequiturs throughout, mostly coming the enemy or environmental design. It harkens back to the old days of British computer games when enemies were just any old random thing. In VVVVVV, you’ll avoid ghosts, bouncing circles, glitched graphics, and puffs of smoke from random factories. Most amusing is the bullhorn screaming “LIES” in big red letters – they’re damaging projectiles, of course. Crazier still is the elephant. Keep in mind that it’s blinking, too, which accounts for the weird coloring when pasting these images together. If you spend too long in this room, it turns your guy sad. Who knows why. 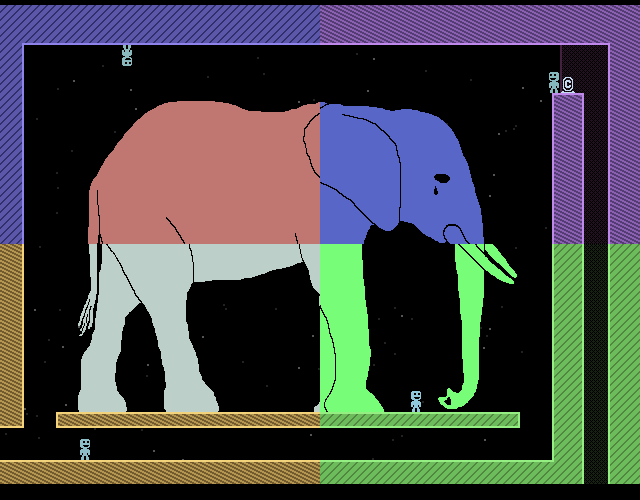 The music is also stunningly brilliant. A collection of chiptunes by Souleye, there are only about six main tracks to match up to the levels, but they’re all amazingly catchy, capturing the best aspects of 8-bit music without the shrillness inherent of the SID chip. At least four of its tracks inhabit the best Western video game music track list, voted on in November 2011, and they easily stand up next to some of the more established songs.

For as brilliant as it all is, VVVVVV is almost too elegantly designed. Part of the reason 8 and 16-bit games had all of those checkpoints and limited lives was to extend their length. Without that, VVVVVV is pretty short. A first time playthrough will probably take no longer than two hours, and that’s even with hunting down the trinkets (with the exception of Veni, Vidi, Vici, which can easily take up a chunk of time, if you let your OCD get ahold of you.) Experienced players can beat it in half that. 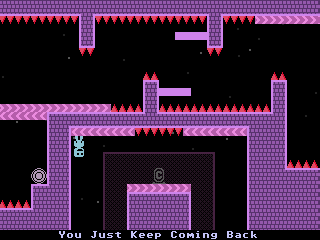 About a year after its initial release, a revised version was published, which features a level editor, as well as several bonus levels. While none are singularly as large as the main game, some are pretty expansive, and some are even more difficult than Veni, Vidi, Vici. VVVVVV 2.0 also features other niceties, like time trials, and the “analog” display mode, which will make the game appear like it’s being played through an old malfunctioning television. There are also two new songs, though they only appear in the bonus levels. There are also some behind-the-scenes technical fix-ups, like the whole game being reprogrammed in C++ rather than Flash.

In December 2011, VVVVVV was brought to the 3DS eShop courtesy of Nicalis, the same indie publisher that brought Cave Story to the wider masses. It’s pretty much just a straight port of the revised version, though it’s missing the level editor and instead has a handful of extra player levels. It also has a new remix of one of the songs, played in the final area. The 3D effects aren’t fancy, but they’re pleasant nonetheless, and the controls are actually a bit tighter – the computer version doesn’t natively support gamepads, and programs like Joy2Key tend to introduce a bit of lag, so from a purely gameplay standpoint this is probably the best version. This was eventually ported to the PlayStation 4 and Vita, and mobile platforms as well. The Switch version runs at a smooth 60 FPS and has a local co-op mode.