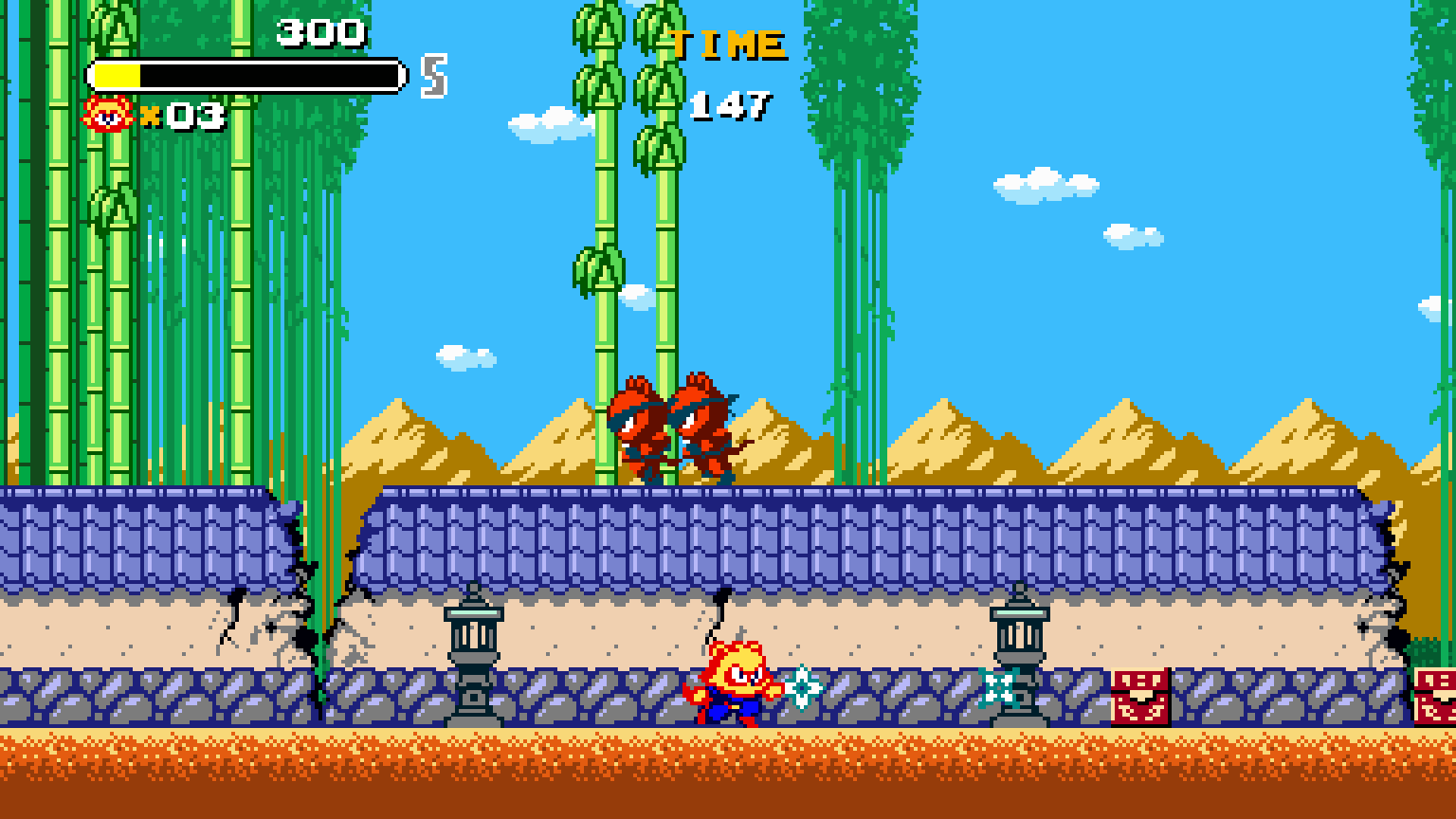 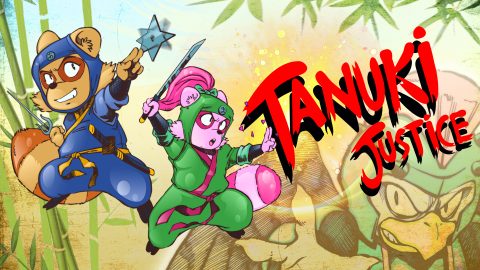 Wonderboy Bobi is a French game developer that first cut their teeth on Sega-inspired fan games before moving onto professional development with Aggelos, a Monster World tribute. They also developed Tanuki Justice, a sorta-cutesy action-platformer that doesn’t pay specific homage to any titles other than the popular theme of “ninja action”. (The closest analogue, at least stylistically, is Vic Tokai’s Master System game Psycho Fox, mixed with the Japanese castle level of Wonder Boy III: The Dragon’s Trap.) The heroes of the game pit two ninja tanuki against a legion of other anthropomorphic critters like pigs, cats, panda bears, lions, and others. 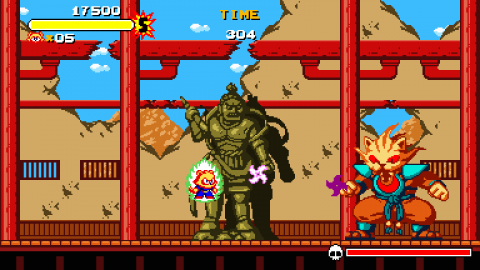 The main characters attack with shurikens, which actually have pretty short range, but can be fired in eight directions, and there’s a single power-up to strengthen it. By both attacking enemies and grabbing crystals in boxes, you power up a magic meter, which lets you throw a single gigantic shuriken, which will take out most regular enemies in its path and massively damage bosses. You can double jump, as well as the capability to move and fire in any direction, though that’s the extent of your arsenal. One hit will take you out, though there are shields you can grab with absorb a single hit, and losing all of your lives will send you back to the beginning of the stage. The game offers two player simultaneous play, something unfortunately rather uncommon for indie games, so it’s very welcome here.

Tanuki Justice is also pretty short, with six levels plus one standalone final boss level. There are a few areas that require some skill or ingenuity to reach extra power-ups, and the final two levels put up a challenge, but otherwise anyone with experience in 2D action platformers will probably see the Normal level to the end in less than 30 minutes. That isn’t necessarily a negative – it’s a good entry point for those who aren’t quite as experienced, or for parents who want to play co-op with their children. But veterans should definitely stick to the higher difficulty levels to get anything out of it, because it tosses enemies and projectiles at you relentlessly. However, the range of your default shuriken is too short to be effective, so you really need to avoid dying in order to keep your powered up attack, a very authentically retro throwback if there ever was one. The game keeps track of your high score with every run, but there’s also not much in the way of a scoring system beyond “killing everything”.

There’s also a rather curious control quirk – you can use the shoulder triggers to either lock your aiming direction, so you can run in one direction and shoot in another, or hold your position to aim in any direction. Except, when holding your position, you need to be completely still when you press the button, otherwise it’ll activate a completely useless autorun command, something that will likely you get unintentionally killed. 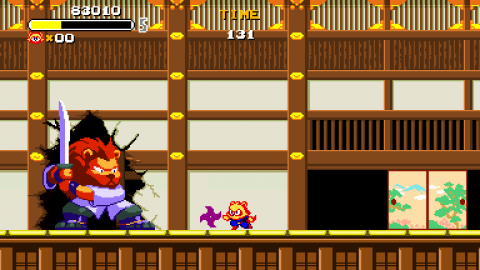 Outside of the control issues, the core action is pretty fun – the multi-directional shooting and agile characters make the hero tanukis feel more versatile than the average 8-bit action game, and the levels and boss fights are generally well designed. The graphic style is also appealing, with a color palette that resembles the Sega Master System’s bright coloring, albeit with more detail. The character designs are also excellent – they may be furry creatures, but they perfectly balance the line between “cute” and “cool” that oh-so-many 16-bit mascots tried and failed to accomplish. The music sounds like the Master System FM synthesis but with substantial enhancements, though little else about the soundtrack stands out.

Tanuki Justice is enjoyable, especially when the action gets really hectic, but without any defining element other than “woodland creates as ninjas”, it lacks a central gameplay gimmick that would set it apart from other similar games.