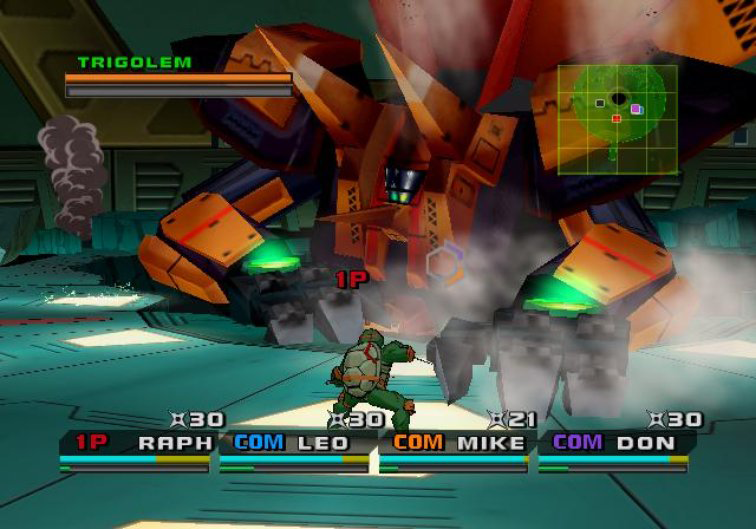 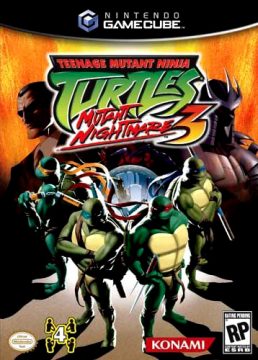 Rounding out Konami’s trilogy of 3D beat-em-ups, Teenage Mutant Ninja Turtles 3: Mutant Nightmare was released during the holiday season of 2005 following the template set before it by featuring a season spanning storyline with locations and casts taken from the ongoing TV show and adding in new exclusive segments to beef up the package.

Facing the invasion of the Triceratons, the TMNT take to time travel to stop the prehistoric reptilians from the future, the ninja foursome also has to fight against the return of the Shredder and various other foes over a four episodic structure with each episode consisting of multiple stages on a linear path. Between each stage comes an animated sequence either directly from the TV show or hastily made for the game itself, with some interjunction done to focus down the plot to suit the game progression.

Mutant Nightmare runs on the same engine as the earlier games and plays almost identically. Rather than exploring new styles of gameplay or reinventing itself with innovating the genre, it falls back on the previous games, taking what works from both TMNT 2k3 and Battle Nexus and combines them. Combos and controls are simplified with faster and more responsive than before, with the whole emphasis of hot swapping to find the most strategically apt turtle being removed. Each turtle have a larger set of moves from the start of the game, and can be updated by collecting crystals. This time around however, there is a shop system where players can purchase moves and other improvements on their own volitions along with finding scrolls on the stages. Each character is given their own health bars rather than sharing one this time around.

Stages are laid out the way they are distributed in TMNT 2k3 with episodic sections with levels within told in order, and the levels themselves are more in style of Battle Nexus with a mix of brawling and platforming, combined with certain sections of hoverboarding along with all new Hangliding and shuriken throwing scenes. The platforming sections are kept at a fair minimum in order to answer the overwhelming complaints received from the release of Battle Nexus.

Other new features include the all new team-up moves, teaming up the turtles to perform a team move that takes out a great number of enemies surrounding them and also allocate some greater damage to the boss characters. There are also two new transformations that the turtles can perform, Dino Turtles and Ultimate Turtles, with Dino Turtles being an original design ,making the ninja brothers extra scaly and fearsome, while Ultimate Turtles are based on the Mystic Fury toyline by Playmates.

The graphics are more or less identical to Battle Nexus, which by now have become rather archaic, lacking any improvement to differentiate it from the earlier games. In its own right it does look good and the animation as well as presentation is well executed, but it feels a bit tired the fourth time around. The video clips are fairly grainy as well, moreso than the previous games.

But for most, Mutant Nightmare is remembered simply because of the ability to unlock Turtles In Time in its entirety. Unlocking the game is even hastily done in the game, only requiring the completion of the first episodic section. Being the arcade version of Turtles in Time, it does not include the extra stages found in the SNES version, and also music and other assets taken from the 1987 were removed and replaced with material from the new series.

Konami’s last turtle adventure completes the circle by ending up exactly where it started with the 2003 game, simplistic with ideas and features never taken much beyond the basic premise, and none of the games fleshed out enough to truly give a timeless experience unlike the games that can be unlocked in them. Mutant Nightmare is at the very least enjoyable and improved ever so slightly from Battle Nexus, but falls short compared to the other games on the market.