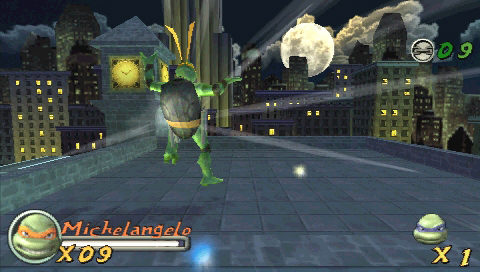 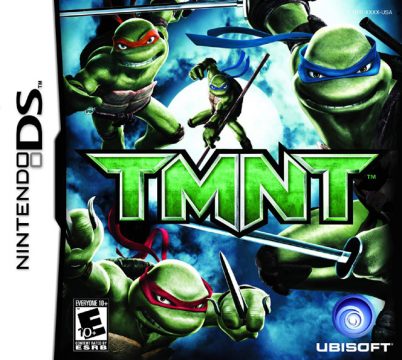 The DS and PSP versions of the game are relatively similar to each other, though makes use of their individual system’s strengths in different ways. Both are based on the same story layout as the console versions, and brings the action to the rooftops in New York in a fast paced acrobatic platformer.

But it’s not a conventional platformer in the sense that you directly control the turtles and navigate them through the scenery. Rather the DS and PSP versions can be described as rhythm platformers, with the emphasis being on hitting the correct corresponding button to progress on and perform the necessary action, and the distance being controlled by the game rather than the player. The idea of this is to create a smooth flowing sequence of action which allows for some really fast paced voyage that blazes high above the city. The turtles can be directed into directions to collect tokens along the way to unlock extras. Along some stages this rhythm is broken up by battle sequences which pans the camera to accommodate for the action.

The fighting in this game is further simplified down from what is found in the console system, and as such the fights themselves are not many and the enemies likewise. The Ninja Turtles feature the same amount of short string strikes and a charge move, along with an assist strike where another brother will come in and take care of the enemies. The strikes are easily performed with a simple button press.

While the idea is very noble and does at least try to introduce something different from the direct console counterparts and other games at the time, nothing really seems to mesh that well, especially the platforming portion which takes up about 85% of the game. With the idea that with a rhythm, the game will be fast and fluid, the actual result is far from as smooth as the game would like you to think. Most jumps are followed by fumbling to find the correct button which is never really that well stated, and even when some sort of rhythm is possible, it never achieves any level of excitement due to the loss of actual exploration and overall control.

But it is the fighting engine that really bogs the whole thing down. It is by far the worst single fighting engine ever presented in a TMNT game, worse than even Mutant Melee, and the simplistic controls don’t help to make it any more tolerable with repetitive animations and horrible AI. The few boss battles also suffer from terrible AI and design flaws that are enough to warrant the game shut off.

Between each version, there are many differences visually, though the core game remains the same. Out of the DS and PSP, PSP features much better and polished graphics, while the DS with its smaller screen becomes a pixilated and ill proportioned mess, and the bottom screen not being used for much other than a status screen which can mostly be ignored. The PSP has weather effects not found in the DS game as well, and features clips from the movie playing out the story, while the DS uses still images. Both versions features the ability to link up with another player to race each other for stage completion.

There is an interesting note about the audio of this version however. In the very same year that would see him featured in one of the game series that defined him as a composer, Jake Kaufman would score both Contra 4 and TMNT in the same year, bringing him into both franchises which directly inspired him to become a video game composer himself. However due to constraints put on him from the publisher, most of the upbeat music he sent in for the game was rejected, with the request that the game should not sound so Mega Man-ish. Kaufman revised his work to have more cityscape ambiance and low tone rock elements. The result is probably Kaufman’s least memorable soundtrack.

Despite being of rather low quality, the DS version of TMNT reportedly sold very well, but even though it was a mass market success, for gamers it’s not worth the time even if you happen to be such a fan that you sleep in TMNT themed bedsheets.