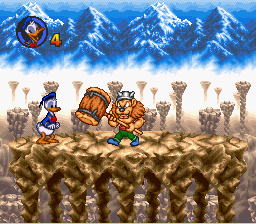 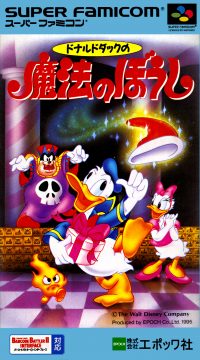 Donald’s first Japanese-only adventure wasn’t exactly the best game he could have starred in, so it was probably for the best that it was localized as something entirely different so that people didn’t associate him with such lackluster products. But there are times when the restriction of licenses make it so that the wide audience miss out on a truly great game and fades into obscurity because of it. That is the case with Donald Duck: Mahou No Boushi, released in 1995 by Epoch. The game was developed by a rather unknown group called SAS Sakata, who previously had been mostly used by Data East to convert their arcade titles onto home console systems, as well as original titles like Werewolf and Robocop on the NES. The title of the game translates into “Donald Duck and The Magical Hat”.

Daisy Duck’s birthday is coming up and Donald joins her into town for some window shopping, looking for ideas what to get her. As they stroll down the street, Daisy catches eye on an expensive hat and tells Donald she wants that for her birthday. Realizing quickly that he doesn’t quite have the money to buy a 300 dollar hat, he makes the decision to get some part time jobs so that he can buy it in time for her birthday party. As the game starts, Donald gets himself a flyer with the available jobs listed and their salary rates. 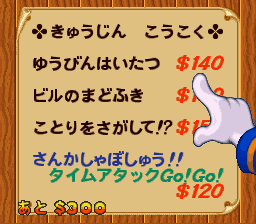 The four jobs that Donald can choose from are paper boy, window cleaner, canary fetcher and game show participant.

The paper boy job takes you through a small stretch of houses that loops infinitely until all papers are delivered. By pressing the A button when passing the mail boxes, Donald will throw a paper in. The roads are confusing however, and paths constantly cross each other in forks so its up to Donald to figure out the way to reach all the subscribers. To make matters worse there are rabid dogs and reckless drivers all over town and as if that wasn’t enough, some subscribers live in air balloons, so there is no choice but to launch into the sky to deliver them the paper. After having delivered 25 papers, Donald gets paid. The window cleaner job requires Donald to go high into the air with the use of a lift and ladders, balancing on the narrow window frames and avoiding people throwing trash out of their windows or playing catch with a ball in between office windows. Some of the frames are old so they have cascaded, requiring the use of both ladders and the lift to reach all the dirty windows. 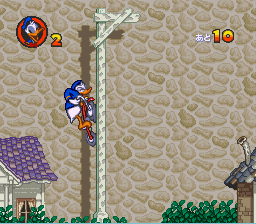 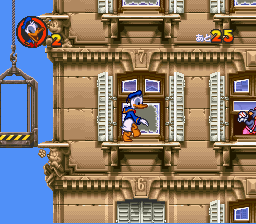 The canary catching requires Donald to go in and rescue Grandma Duck’s bird, which has been locked up and taken by Pete apparently. The guard dog is asleep, so it’s important that the bird is retrieved by being as quiet as possible. The simple touch of a cup will lead it to fall down and break, and stepping on the radio leads them to start playing loud music. The game show is run by Goofy and goes by the name Race A Go Go!! This is an obstacle course broadcast on the local TV where the participants must race to the finish and avoid getting stuck in jello or fall into the shark tanks. Each job has an intro sequence where the special controls are explained, often with Donald being frustrated over the work he must do and having a temper tantrum over it. 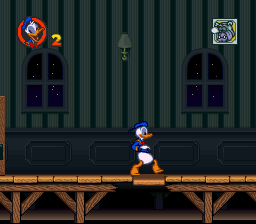 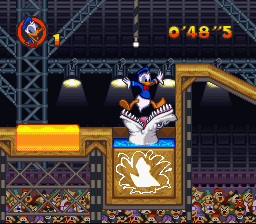 Once the money has been raised, Donald heads over to the hat store to get Daisy her gift now that he has the sufficient funds. Now you might be wondering “Is that it? Four jobs and he gets the hat?” Well of course not. Once Donald arrives at the hat store, the hat is sold out. Completely at a loss of what to do, a magical wizard appears and says he will help Donald in getting his hat if he will assist him of getting rid of the ghosts in his castle by turning the lights on. Once agreeing and maneuvering himself up the clock tower, the sailor suit garbed duck is told of the wizard’s secret and reveals himself to be the king of a kingdom far away where Big Pete put a spell on him, turning him into a magical hat. The king asks Donald for his assistance in lifting the curse and getting rid of Pete’s evil doings in his kingdom, and teleports them both there to start an all new adventure. In this kingdom, Donald has the choice of four different levels, all which he must go through and face Pete’s henchmen before catching a ride with Pete’s blimp up to his floating castle. If there was ever a halfway mark in a game where the 180 turn makes you go WTF, this would probably be it. 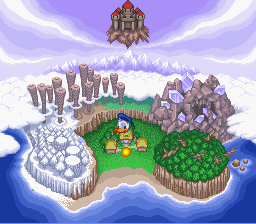 This is where Mahou No Boushi turns into an action platformer. The kingdom Donald visits shares a lot of similarities to the one Mickey goes through in Magical Quest by Capcom, in fact, the overall storyline and layout feels very similar, as well with Pete being an evil wizard in a strange faraway world. The major difference of course is that Mahou No Boushi features a first act that is completely different from the rest of the game, and that there are no special suits for Donald to obtain. He does get the power of the magical hat to help him out however, which allows him to become invisible and protect himself from enemies. Aside from that, enemies are taken out by jumping on them and delivering a diving headbutt. Each level is very different from the other, often making use of a gimmick that goes throughout the entire level. The forest area is maze which uses Mode 7 to rotate the world around in order for Donald to reach the right paths. The ice level is a race against a cheating rabbit who will push you off track if he catches up with you. The mountain ranges and crystal mines play more normal though the high mountains uses a lot of wind gusts to fly Donald around, while the crystal mines makes use of mirrors to teleport him to different rooms. The boss battles all have different strategies to them, with some pretty interesting ideas like the mirrored ghosts, who will do the opposite of your control input so that the player basically has to control the boss into the falling spikes while still controlling Donald to avoid them.

Like most of Donald’s adventures so far, the game looks absolutely amazing in motion. Donald moves and behaves almost exactly like in the cartoons, and everything from the way he moves, bickers, talks and reacts are all spot on. The background art is at times absolutely stunning, especially in the high mountain ranges and the dangerous village, where the background stretches far back with views of mountain tops and oceans. Stylistically it shares a lot of similarities to the Magical Quest series as mentioned before so it is quite apparent their goal was to give Donald an adventure similar to Mickey Mouse and for it to be just as good, if not better. 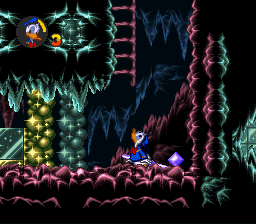 Mahou No Boushi would have succeeded in being a wonderful game if it wasn’t for just one major flaw. The game suffers from some extremely shoddy hit detection on Donald’s landings, leading him to just go through small platforms or taking a hit from enemies if he is not precisely at the right angle and spot, which is pixel precise with no room for error. This leads to Mahou No Boushi being incredibly frustrating to the point where you are the one who will throw down the hat and start yelling at everything within reach. This flaw is not made better by the jumping mechanics either, which sometimes has its little mind of its own. The distance which Donald travels in his jump isn’t very far, but he has a sprint which can help him accelerate and achieve more air in his jump by holding down Y. The problem with that is the sprint takes a bit to get going and second, the added boost is not determined by how much speed is gained before the jump, rather it changes from normal to Michael Jordan with rocket shoes within a split moment. Even the simplest jump gets screwed over by this as Donald will just suddenly fly four times the length of his normal jump and plunge him into his well deserved death.

It’s quite a shame that these two flaws make such a huge impact on what could have been a truly amazing game had it been more refined. Everything else is there – clever level design, interesting plot, beautiful graphics and what would be balanced difficulty had it worked right. At least the music is awesome, with plenty of catchy game pop and old-time tunes accompanying the levels, and some hilarious songs featuring vocals from Donald. Donald actually has quite a bit of speech in him despite being an SNES game, mostly yelling thing in Japanese like “yatta”. The most interesting speech sample though, is the very clear and surprising “god dammit” which Donald yells once it is game over time. It would be a cold day in hell before Disney of America would ever allow Donald to yell such profanity, but it must have slipped through the Japanese division. The music was composed by Takahisa Hirano and Takeshi Miura, who coincidentally worked on only one other game together – the Japanese only release of Disney’s Alice in Wonderland on Super Famicom. Miura would go on to become a head composer on the Resident Evil games for Capcom.

Mahou No Boushi was never released outside of Japan and never re-released in any shape or form, leading it to be virtually unknown for most gamers, even in Japan. When the game works, it truly shines and is one of the most enjoyable Disney titles out there, with the graphics being some of the best on SNES, and the music always being enjoyable and diverse in style. For those who survive through the flaws and shortcomings, there will be a great adventure waiting and the ending makes it actually worth the trouble.