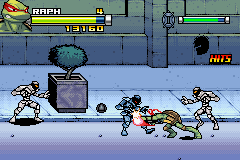 The GBA version of the 2007 TMNT game is a completely different affair from every other version across any system, and was developed with the classic arcade games specifically in mind, using a slightly modified version of the story to present a more straight forward plot than the other games, which tried to incorporate some brotherhood to varying degrees of success or failure.

There is no platforming action to be found whatsoever in TMNT GBA, rather here the idea is to bring back the barrage of enemies in a simplistic yet addictive beat-em-up worthy of the TMNT name and association. Over the course of seven levels, the Ninja Turtles must battle not only the low life thugs of downtown Manhattan, but also the Foot and mythical creatures from thousands of generations ago. In addition to the general cast of the movie, TMNT GBA also features an larger supporting cast of characters from the 2k3 series, despite the movie itself not being set in that same universe. The game usually gives a free choice of what turtle to play as and who is their stage partner, though certain stages has the character pre-selected due to plot points.

The fighting system is reminiscent of what is found in Turtles in Time, with one button acting as strike and the other as jump. Pushing the strike button in rapid succession leads to a combination of strikes, and there enemies can also be thrown as in the previous arcade games. However there is much more to the fighting system of TMNT GBA. 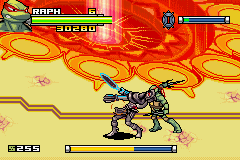 A larger range of attacks, from knee drops to sweep kicks and rolls can be performed, essentially doubling the amount of moves from the get go of the game. Furthermore the turtles gain experience from each stage and can level up a number of three times, which will enable longer combinations and more power and speed as they progress. The back kick found in Turtles in Time also returns, eliminating the occurrence of enemies sneaking up behind and gaining a free strike. There are also weapons to be found on the stages that can be picked up and used for a limited time to inflict even greater damage than normal and also increasing the number of attacks per turtle extensively. The team moves are also featured in the game, which can be used in two ways. Once the co-op meter by the health bar fills up, the turtle chosen as a stage partner can be summoned by pushing either of the shoulder buttons, and will proceed to either eliminate every foe on screen or leave behind health refills. Similar to gaining experience, the strength between the brothers themselves becomes stronger as their Brotherhood Bond stats increase in accordance with how many times they have been selected together. Once their bond is strong enough, they can perform a super team attack by pressing both shoulder buttons at the same time.

Enemies also behave and can be used differently in offensive ways than what is seen in the other TMNT games. Once they are knocked down, they can be struck while downed, and even picked up and thrown into other enemies to inflict damage, and upon defeat they will drop coins which can be collected. This seems to be a direct reference to Techno’s River City Ransom games, which also allowed for enemies to be propelled and used as weapons against their own accomplices and when defeated they drop collectible coins. The stages also have a much increased interactivity with destructible environments which can reveal both weapons and extra cash, though the game actually allows the Ninja Turtles to destroy parking meters and take the money which falls out of them, which is committing a felony.

Between each stage, the Ninja Turtles can walk freely around their sewer hideout and a small portion of the surface. This opens for further customization and upgrades to each character. On the surface level, there is a Sports shop which sells items which can increase the movesets, enable new abilities and also gain more experience. In the sewer hideout, there is a sandbag hanging from the ceiling which can help power up the turtle of choice, and there are even achievements in the game which unlocks different pieces of TMNT memorabilia that can be accessed from the trophy shelf. Achievements can be accomplished by performing certain in game tasks, such as beating a set number of specific kids of characters or picking up a number of specific items. Some achievements are also accomplished simply by beating a stage. Once the game is beaten, the save file can be loaded to play the game multiple times to unlock more achievements.

Between some of the stages there are also some mini games featuring Casey Jones and April, with the former having to deflect shurikens thrown at him and the latter throwing boxes at targets within a time limit.

Graphically, the game features a vast amount of visual flair. The turtles themselves appear as their leaner movie counterparts, and are each smoothly animated and given a lot of distinct personality between how they attack and behave. The moves themselves also have more frames, resulting in smoother animation that what was even seen in the arcade version of Turtles in Time, and the sprites are large and defined in detail, owing a lot of its visual influence to the cartoons rather than being specifically based on the movie. The enemy characters, particularly the bosses, are also very animated and the bosses can be quite large and intimidating. The stages also feature a large number of destructible elements which display some nice visual effects when broken. When played on a Game Boy Player, the game looks even better and really manages to bring forth the great art style and smooth animations.

What really keeps TMNT GBA from being the very best TMNT game of all time is the lack of multiplayer, which actually does bring down the game quite a bit considering how much the genre benefits from it, and how essential it is to the TMNT franchise. In this game, the entire game is played through a single player campaign, and the only form of co-op is the summon of the brother which lasts a few seconds which is somewhat disappointing.

Another issue is the short length of the game, which results in the player never fully being able to make use of the experience system. The pre-set choice of Raphael during two stages also brings this system a bit out of balance since out of the seven stages, there is only so much experience to be gained through each playthrough, so the game really relies on the player to stick with one team throughout the campaign. As well done as the graphics are, the stage design is a bit dull and could use a little bit of diversity to spice things up rather than constantly being a left-to-right flat surface. The audio is a bit more engaging than the other versions of the game, though it remains fairly forgettable even here.

But these flaws can largely be forgiven simply due to the fact that the game is incredibly fun and satisfying, and actually manages to evolve the classic concept further much more than the other versions manages to successfully introduce anything new to the series. There is a slight irony to the fact that the superior version of the TMNT game would be found on the oldest system out of the platforms it was released on, and it achieves this by evolving 13 year old mechanics and properly updating the genre to give both old and new gamers a good worth for their money. TMNT was one of the very last big name titles released for the system, and it’s a true must have title for any GBA owner.