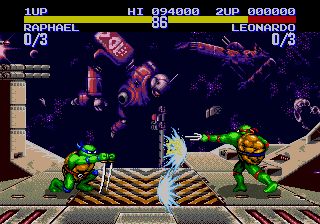 Starting in the end of 1992, the TMNT franchise was beginning to suffer from overexposure and public fatigue, with excessive marketing on the many different toy series coming out, several comic books on the shelves from the original to the Adventures series, television cartoon and the new third live action movie in theatres. A major issue that had grown out of the many branches was the fact that the fanbase had become increasingly divided, especially between Archie’s Adventures comic book and the cartoon, and the very vocal yet smaller fanbase growing disgruntled with the Mirage comics as well. In attempt to centralize the fanbase more and keep the TMNT name from waning, the biggest marketing campaign since 1988 was about to take place throughout 1993, the aforementioned live action movie, 3 new toylines, and 3 new video games. The video games were to be released on the three major platforms – NES, SNES and the Sega Genesis – within a short span of time from one another. Teenage Mutant Ninja Turtles: Tournament Fighters was first released on the Sega Genesis in September of 1993. It was the only game from the Konami TMNT games to ever get a toyline made by Playmates. Farley’s Fruit Snack also included “game tips” for each of the different versions produced in their TMNT Fruit Snacks packagings. The toyline did not feature any similarites to the design of the games nor characters available in either of the versions with the exception of the Ninja Turtles themselves.

Directed by Mitsuyo Taira who later would become a programmer on Britney’s Dance Beat, the Genesis version focuses more on a darker and more subdued game with the American market in mind. It features several innovations for its time, most noteworthy being the ability to expand the levels by destroying scenery and an instant replay feature. Making use of three buttons, the strength of either punches or kicks is determined by holding a direction on the D-pad and pushing either which button, while the third button acts as a taunt. Taunt can be used when health is dangerously low to execute a Desperation move which can quickly turn the tides.

Splinter is again kidnapped by the Foot, though this time not by the Foot Soldiers, but rather evil clones of themselves taking Splinter back to Dimension X with them. Realizing they are now up against a much greater force than ever before, they enlist their friends to go with them to the evil Dimension and fight the clones and rescue their Master and father. The available roster in this game consists of Leo, Raph, Mike, Don, Casey Jones, April O’Neil, Ray Fillet and the Genesis exclusive original character; Sisyphus. The unplayable bosses are Triceraton, Krang and Karai. Shredder, now presumably defeated after the events of the previous game, is not featured in the game, so newcomer Sisyphus will have to do. Though the boss characters are rendered unplayable, there exists codes to make them playable through the use of cheat devices. 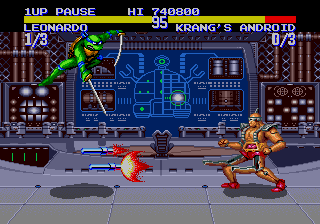 Each character has four special movies and a single desperation move, done by doing recognizable sequences of motion found in other fighting games at the time, such as Street Fighter II. Blocking is done by eholding in the opposite direction of the opponent, and the desperation moves are final resort moves that can only be done by taunting and a specific sequence of motion when the lifebar is flashing red, though if it connects properly will effectively take out most if not all of the opponents lifebar. Most moves and characters are balanced out well, with an answer to mostly every move in the game. Strength, speed and reach is determined by the standard affair of fighting game logic with larger characters being more grapple based brawlers and the Ninja Turtles being all rounders.

Beyond the surface of recognizable controls and fairly well balanced mechanics lies a myriad of flaws that brings the Genesis version of Tournament Fighters down quite far, most having to do with the difficulty in single player mode. Casey Jones, making his playable debut in this game, is virtually impossible due to his reach and speed, bundled with the fact that the computer AI is incredibly cheap, allowing for little in the way of offence on the player’s behalf before being massacred into a puddle of turtle soup. This difficulty only ramps up as you progress, making the last few fights surely some of the most infuriating moments in video game history. It seems the larger stages and replay feature comes at the expense of a lot of both subtle and obvious details. Stages are for the most part shades of gray, visually uninteresting and completely static with little in the way of life or depth. Worse yet, the stage designers decided to put this guy in the background: 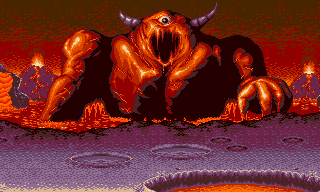 Christ, stop staring at me! Go back into the sewers with your mutant parents, I can’t concentrate!

Anyway, things like this poop monster make the game look rather bland when it comes to the backgrounds. But at least it can’t get worse than a one eyed monster staring you right between the eyes like it’s ready to explode, right?

Denver the Dinosaur here would beg to differ.

The sprite characters are definitely gorgeous at first glance and the general design of each character is well done, but lack a good amount of animation frames, leading to some moves even being one single frame rather than a smooth flowing animation. April seems to be the character suffering most from this problem, and her sprite shows signs of being hastily modified from a certain female character in the SNES version in some of the moves, suggesting that the SNES game was the lead production out of the three games.

Apart from the single player mode that tells the story of the game between matches, there is also the Tournament mode, exclusive to the Genesis version. Tournament mode is one of the first example of a Survival mode found in many fighting games today, where the goal is to survive a total of 88 matches on a single lifebar. It might seem like the idea is good when one thinks to Survival modes today in games such as Dead or Alive, but in Tournament Fighters, it feels more like a hastily made mistake as it is impossible to even fathom anyone surviving 88 matches when the game already is a beast in terms of difficulty. One might also think that there must be a grand prize for surviving so many matches and that there must be a reason for it to be in the game, but rest assured, with the help of save states and over-the-counter sedatives, we can dazedly announce that there is nothing to be gained from beating all 88 matches. 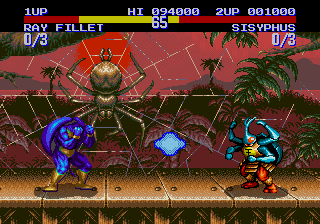 The second TMNT game to land on a Sega console struggles to find stable footing when not having the benefit of previous titles to support it self with. The characters and general character design is strong and the soundtrack is for the most part great, as can be expected when a game is scored by Suikoden‘s Miki Yanagisawa, even though the sounds are a little bit flat and the voice clips are near unintelligible. But for all the interesting ideas and choices Tournament Fighters presents, the ideas are all novelties in conception rather than useful in execution. The fundamentals of the game are too broken for any novelty to save it from being largely mediocre.

Chris Allan was brought in to do all the Tournament Fighters artworks for the Western releases, and each cover has a different Ninja Turtle fighting an enemy, which actually are featured in the game this time around. For the Genesis version, Raphael is fighting Triceraton. The Japanese version features artwork based on the live action design of the TMNT, done by an unknown artist not associated with Mirage. The stage selection screen also bears very strong resemblance to another Konami game based on a Western property, Bucky O’ Hare.