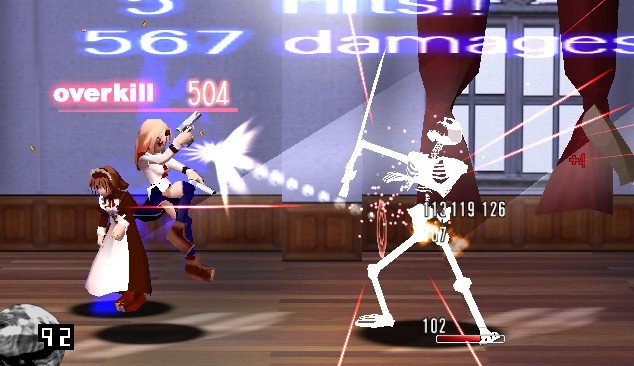 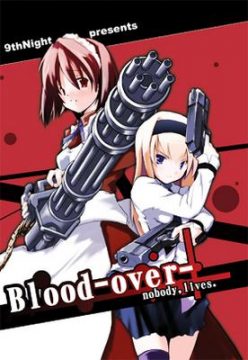 What if Devil May Cry were a 2D side scroller? That’s the question that Blood-over- tries to answer, to varying degrees of success. Of course, Devil May Cry was an attempt to revamp 8 and 16-bit action games into the 3D model, and added elements found in traditional beat-em-ups. The only game that really tried to put the whole concept in 2D was Capcom’s own Viewtiful Joe, although that focused more on melee attacks, and a good portion of the game was spent fiddling with the gimmicky time manipulation functions.

Anyway, in Blood-over-, you control a girl named Shou, a “Free Hunter” who, like Dante, wields a pair of duel pistols. She’s also accompanied by a maid named Akari, who litters the round with her gatling gun whenever your super gauge (called “Blood” here) is high enough, but otherwise just follows along and yells “oneesama!” a lot, as anime maids are prone to doing. When attacking with your guns, it autotargets the nearest enemies, although you hold down the target lock button to keep firing a specific foe. Shou also has two primary kick attacks – a quick, standing kick and a more powerful thrusting kick. Using command motions, you can execute a few special attacks, like a Guile-esque somersault kick and a super bullet attacks. You can also launch enemies in the air and then proceed to juggle them by ducking and shooting. In addition to the Akari gatling attacks, there are two other special moves which consume special energy. You jump by pressing Up, though a separate button would’ve been nice. 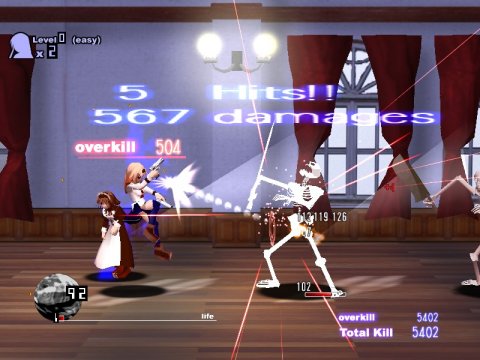 The crux of Blood-over- revolves on the Overkill combo system – although most enemies only take a few hits to kill (all of them have life bars, so their remaining vitality is easy to determine), you can keep attacking them for “overkill” damage if you’re quick enough. The more overkill damage you can deal, the more your super power gauge will fill. The quicker you can string together these attacks, consistently overkilling foes while avoiding damage, will increase your combo counter, so you don’t look like a chump when the score total pops up at the end of the round.

This all sounds pretty cool, but the melee combat system is a bit lacking. Your kick attacks are stilted and don’t flow together to create combos. They’re also pretty weak and don’t stun or repel enemies, so they usually just puts you in the direct line of enemy attacks. The gunplay works much better – if only the two worked together in tandem, the gameplay would feel much smoother. It also reveals the biggest pitfall of 2D – there can be numerous enemies on the screen, and since all of the action takes place on a single plane, they tend to clutter up the playing field. 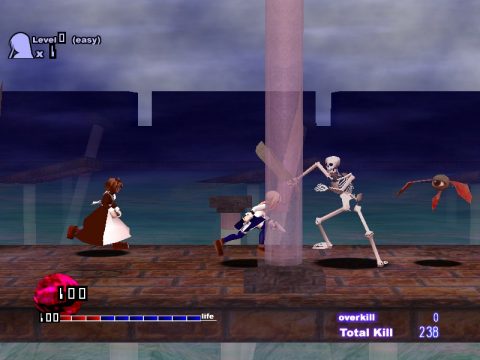 Blood-over- utilizes full 3D graphics for both the characters and backgrounds. The human character models are well animated, even though they’re severely lacking in details. Most of the enemies are pretty lousy though, which is made particularly apparent seeing as there’s only a couple different monster types throughout the entire game. The system requirements are pretty low – Pentium 3 1 gHZ and a video card with 32 MB of RAM – but the speed is pretty erratic on my computer, slowing down immensely as more foes clutter the screen. All of the stages are straight lines right to the end, with repetitive backgrounds that only change when you reach the boss. You can run by straight past most of the bad guys, although there’s usually a midboss or some kind of stopping point where you need to clear the screen before you continue. The rock soundtrack is catchy and well-composed, but really suffers from the cheap MIDI synth used to record it. With better quality samples – or even real instruments – it’d actually be pretty remarkable. The title screen song – which has lyrics – is pretty cool, at least. There’s also full voice acting in the cutscenes.

While Blood-over- is a cool attempt to mix up the action genre, it really could’ve used some more polish for it to really take off. If approached by a professional team, they could definitely turn this one into a winner, but even in its current state, it’s still fun.