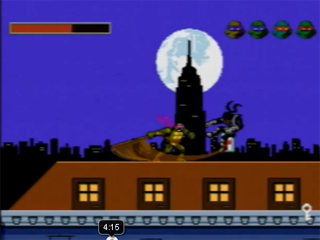 During the mid-2000s, the plug and play platform became a popular cheap video game alternative. For the most part, these consoles were controllers running an emulator with supplied ROMs of early arcade classics, providing easy set-up and a cheap buck for the classics of yesteryear. There were quite a few of these kinds of units out on the market at one time, ranging from the very lowest of quality to truly great compilations of console and arcade classics on their own little themed consoles. TMNT received three of these sorts of consoles, all of which were developed by Wayforward and released at the same time.

Battle for the City is a Ninja Turtles controller which comes with an original sidescroller starring the four green machines. Over the course of four stages throughout NYC, the turtles needs to track down a number of keys before continuing on to the next stage. The ultimate task is to rescue Splinter from a mysterious perpetrator. Each stage is filled with bad guys, and the turtles can be hotswapped at whatever point. If a turtle gets knocked out, he is captured, though he can be rescued by picking up turtle-shaped tokens. At the end of each stage, there’s a boss character.

Mutants & Monsters Mayhem comes in the form of a lightgun and contains a short lightgun game against the Triceratons. It’s a completely standard lightgun shooter with little to no animations and some voice clips. Due to its dependency on light reflection, the gun does not work on HDTVs.

The Way of the Warrior is a webcam that is set on top of the TV and places cutouts of TMNT villains on screen for the player to physically attack, similar to the PlayStation 2 EyeToy games.

Out of the three games, Battle for the City is the only one with some actual fun value with some good animations and action for a really cheap price.