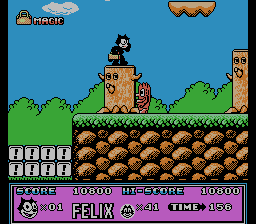 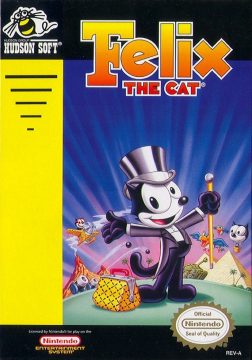 From The Adventures of Rocky & Bullwinkle, to the slew of games based on Hanna-Barbara cartoons, to the downright bizarre Gilligan’s Island, The NES was no stranger to licensed titles based on arguably outdated properties meant to gode parents into force feeding their nostalgia on their unsuspected kids. But possibly the most baffling was that toward the end of the NES’ reign came Felix the Cat, a platformer based on a character that originally debuted in 1919 during the silent film era. Not content with banking on  our parents or even our grandparents, U.S. publisher Hudsonsoft went one step further by looking to our great grandparent’s nostalgia.

To be fair, the NES game shares far more in common with the 1958 TV revival of the character than the original film version, which shifted the character’s tone from something more cerebral be more palatable in the age of Tom & Jerry and Mr. Magoo. Felix was given a magic bag which could transform into any object he wanted, a simultaneous macguffin and deus ex machina as most episodes revolved around someone trying to steal it from him. Felix’s most notable antagonist was the Professor, a mad scientist and sort of proto-take on Dr. Robotnik who would devise schemes for Felix to foil. 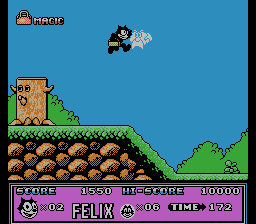 Given that history, the Felix the Cat game makes a lot more sense. The mascot platformer craze was in full swing when it was released in 1992, ushered in by Sonic the Hedgehog whose design was originally inspired by Felix and the other famous 1920s animation icon Mickey Mouse. Simply put, if not for Felix’s creation over seventy years before hand, Sonic and a whole genre of games might not have existed at all. If anything, the creation of a Felix the Cat mascot platformer brings history full circle, proof positive of the universe’s circular nature. Also Felix the Cat: The Movie had been released direct to video less than a year earlier, which also played a small role probably.

Regardless, the game wastes no time embracing video game tropes of the nineties as the game opens with Felix receiving a call from the Professor, letting him know that he’s kidnapped Kitty, the Smurfette version of Felix and the only character from the original silent film shorts, resurrected to be the game’s obligatory damsel to motivate Felix to action. From the outset, everything looks perfectly rote; Felix can run, jump, or attack from a punch glove that emerges from the magic bag at a meager distance in front of his face, tokens emblazoned with Felix’s face can be collected in a similar fashion to Super Mario Bros. coins, and the standard first level of a grassy field marks off the last box of the tired NES platformer tropes checklist. There are even hidden, giant Magic Bags which can be entered like pipes from Super Mario Bros., complete with hidden tokens to be collected before going back through the same way Felix came in. Look past the surface level for even a few minutes however and what follows is a shockingly solid late NES era platformer, made all the better by the amount of personality and attention to detail injected by developer Shimada Kikaku.

While collecting a hundred Felix tokens does give the player an extra life as expected, every multiple of five drops three bottles of milk for 500 points each, while every multiple of ten tokens gives Felix a heart power-up which grants a gift from the magic bag rather than the expected health drop. The first is a burst of stars from a magician’s wand that surround Felix for a brief second, bursting out at every side from seven directions, but cause minor damage to more sturdy foes, before the bag transforms into a car complete with a ranged attack from the horn that goes a much further distance than either the punch glove or the stars. The third and final transformation turns the bag into a full fledged tank that has the complete mobility of the car and fires a cannonball that bounces along the ground more like a rubber kid’s toy than a steel weighted sphere of destruction. After a certain period of time, Felix will downgrade to the last ability denoted by the heart meter in the upper left hand corner of the screen (confusingly, this meter does not denote health), or he can downgrade by touching any enemy or hazard. Collecting a heart power up when in the tank form grants Felix an extra life, while receiving damage while holding the punch glove causes him to lose a life. In this way, each upgraded ability acts as an extra point of health, giving them extra utility beyond their different form of attack. 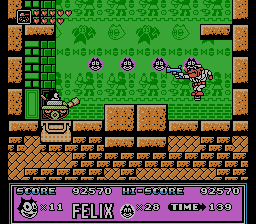 In any event, having a less than ideal power up for any given scenario is less of a death sentence and more of a minor annoyance, as Felix the Cat is a breezy platformer that relies more on charm and accessibility than clever or challenging level design and enemy patterns. There are, essentially, two types of standard levels; First are the outdoor areas, which have enemies that move back and forth, sometimes with a projectile attack to switch things up, and ones that jump in and out of the water as well as a little verticality to hide items and areas or the occasional moving platform challenge. Second are the in-door areas, which rely on tight corridors and falling platforms for their obstacles. Across nine levels, these are the two primary areas the player will see, skinned to look like different locales such as an ancient Egyptian temple or a moon base in outer space, but more or less are just iterations of the same basic design.

Occasionally, Felix the Cat does switch things up with flying and swimming levels, albeit with the same philosophy of reusing content. They more or less operate like Nintendo’s Balloon Fight, requiring the player to press the jump button to stay afloat while avoiding enemies and hazards. This type of stage is again iterated on a couple of times over the course of the adventure, made more difficult but sticking to more or less the same design as the previous stages, including rehashing the same boss fight three times, twice against the Professor’s robot sidekick Master Cylinder where he moves up and down along the right side of the screen firing projectiles at Felix while the player must stay afloat and fire back between dodging shots, and once against a slime monster that acts the same way. Despite this reiteration, the magic bag’s abilities change in these level types, with unique animations and attacks for both air and sea, giving Felix an umbrella or snorkels for his standard ability before transforming into appropriate vehicles for the terrain such as a submarine or biplane.

There is one other type of level – an above water sections that puts Felix in an inner tube to start and later a dolphin after collecting the Heart power up. This is the only type of level that has one upgrade rather than three or four, which would make them ideal stages to farm extra lives if they weren’t the most challenging sections of the game. Neither the inner tube or the dolphin have much traction to speak of, making controlling Felix feel unwieldy fast in what was already a speedy feeling platformer. To make matters worse, there is almost a constant barrage of enemies floating downstream, most of which fire projectiles that need to be avoided as well. And while the lack of a second upgrade helps to collect extra lives, this is counterbalanced by this effectively dropping Felix’s max health by one, meaning playing cautiously is a necessity in same place that purposely makes the controls much more haphazard. Graciously, there are only two stages of this kind in the entire game, though one of them happens to be an ice level which doesn’t help the lack of traction at all. 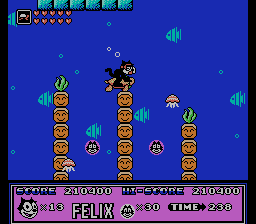 Although these unexpected gauntlets seem out of place in what is otherwise simple game, they exist because Shimada Kikaku seemed more interested in creating a varied and charming experience rather than a polished but expected one. It’s not just seen in the different stage types, mechanics and transformations, but the sheer amount of incidental animations and Easter eggs scattered about. Don’t touch the controller during the river segments, and Felix will sleep in his inner-tube, lazily floating above the river; send out a shot from the tank and watch a seemingly sentient cannonball with a face smile devilishly as it careens towards your foes; clouds in the face of Kitty and the Professor serve more than decoration, as touching some Kitty clouds will give extra points while some Professor clouds can be beaten up for hidden extra lives. These supplemental details amid recycled level design and borrowed ideas add an unmistakable charm to the game and feel almost appropriate for a game about one of the signature TV cartoon characters from the golden age of animation where recycling and borrowing among shows with otherwise unique concepts were an effective business model.

Perhaps this is why the Felix the Cat NES game is still fondly remembered today by the lucky few that got to play it back in 1992. There’s nothing wholly new about the game’s design or mechanics, and yet what is there is uniquely charming, mechanically sound and clearly came from a place of passion for the character and his history. Much in the same way that many of Felix’s cartoon descendants copied and eventually overtook Felix’s own popularity, Felix the Cat used years of hindsight to use what worked and crafted a fun, easy game that is worth the afternoon it takes to clear. The age old adage about execution over idea remains firmly in place.

Beyond the NES release, Felix the Cat was also made for the Game Boy. It plays very similarly, albeit with monochromatic graphics and a smaller screen view, but more than half of the levels have been cut.