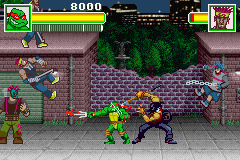 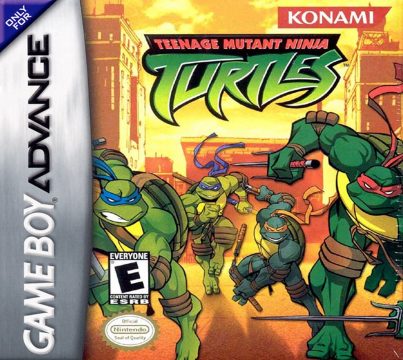 A separate Game Boy Advance game was released at the same time as the console versions, deviating quite a bit from its console siblings. While the story’s premise takes is somewhat influenced by the first season, the game uses a strange mix of original content a long with scenes from the series to tell a heavily abridged and modified storyline of how the TMNT and their new friends meet up. Unlike most TMNT games, the GBA game does not have a two player mode.

Rather than relying too much on the past brawler set up, the GBA game is a 2D action adventure, blending the brawl with some platforming and timing. Each turtle has a set of five acts individually, all telling a different story from their perspective leading up to the bout against Shredder. Individually, they have several moves, most of which derive from the combos done by repeatedly pressing the B button, but there is also a swing attack by holding down the R button, a special attack by pressing both A and B together at the price of some health and a charge move, which fills up a meter underneath the health bar which must be timed for power. If the meter fills above the limit, the turtle will simply fall to the ground in exhaustion. In addition to this, there are also individual skills for each green brother which they make use of in their quest, with Mike having a Ninja Gaiden style wall jump or Leo being able to crawl through narrow spaces. Each provide some diversity between the four acts.

There is also one level per turtle which feature a special play mode, all of which resemble other famous games. Leo has a StarBlade style shooter level against the mousers, Mike takes to his skateboard in what resembles the Sonic two bonus stages, Raph has an Excitebike race against Casey and Don takes to the sky in some Cho Aniki action. Well you could argue it’s like any horizontal shooter but he has a white big beam coming out of his nozzle while phallic shapes fly towards him which leaves the comparison validated.

Like the console counterpart, the graphics on this game is astonishing considering the system and looks great in motion with lush sprite work and animations, though the backgrounds remain fairly monotone throughout the entire experience, with the exception of the special stages. The soundtrack and SFX remains fairly low key and doesn’t move out of its place, being completely in the background, mostly unnoticed.

Despite the turtles having 1 act each to lengthen the game, it’s still quite short, with each act lasting somewhere around 3-5 minutes each, and is generally a breeze clearing through. Apart from some more interacting levels, most of the game ends up on a straight path fighting some Foot Soldier, requiring little effort other than to push one button and wait till they walk into your barrage.

All in all, it’s a completely acceptable, middle of the road action game, helped by the fact it stars the TMNT to give it some visual appeal but held back by repetitive levels and no two player mode. By completing the game and collecting crystals, codes can be unlocked for use on the GameCube version, such as alternative costumes and characters.